Ah, Jerusalem, where every stone, wall, church, synagogue, mosque, street, gate, archeological site, and neighborhood is steeped in history and politics.  The layers run deep and passion high.  In the Christian world, no place is more political than Church of the Holy Sepulcher and few approach its volatile history.

Helena, a self-declared archeologist and mother of Constantine, Emperor of the Holy Roman Empire, arrived in Jerusalem around 325 AD.  She promptly discovered the cave that was believed to be Jesus’ tomb and found three wooden crosses, the plaque with Jesus name as King of the Jews, and nails from the cross.  She had the first Church of the Holy Sepulcher built in four parts around the cave and the site of the crucifixion, making it the holiest site in all Christendom.

Soon after Mohammed’s death, Jerusalem was conquered by his followers. Muawiya , commander of the Arab believers, visited Holy Sepulcher in 661 to show continuity of religions and his imperial role as protector of holy places.
In 1009, al-Hakim, the caliph of Egypt ordered the church destroyed, but forty years later, Christians were allowed to rebuild. When Crusaders arrived in 1099, after very bloody battles, they prayed at the Church of the Holy Sepulcher and took possession for the Latin or Roman Catholic church.   Saladin  took the city back in 1187 and restored the patriarchal throne to the Orthodox.

Despite years of neglect, fire, and battles, the Church still stands but with wounds from the divisions of Christianity.  Looking at a floor plan of the church is similar to viewing a patchwork map of Israel and the occupied territories.  There’s the Armenian chapel of Division of Robes, the Greek chapel of the Derision, a Syrian chapel and Armenian shrine.  We entered from the rooftop where Ethiopian monks patrol their monastery site to keep Egyptian Coptic Christians out.  The only western presence is the Catholic church, thanks to the arrival of Franciscan monks 650 years ago.

American visitors to the Church are surprised to experience its deep Eastern Orthodox ambiance and very large crowds from Russia and eastern Europe.  When the various churches could not agree on custodianship of Holy Sepulcher, a “Status Quo” decree was issued in 1853 by the then sultan, freezing ownership of the parts of the church among the Greek, Latin, and Armenian churches with the Orthodox dominating.  Russia even threatened to invade Turkey if this arrangement weren’t maintained, a bit of an overreaction in our modern eyes.

Forward 160 years and the Status Quo still governs.  The Roman Catholic church waited years for an agreement to celebrate its new liturgy in the church.  With details sketchy, arguments still arise. Recently, the Israeli government fixed a leaky roof and added stainless steel stars as no consensus could be reached on responsibility among the churches.   Just a week before our visit, police broke up a fight between two priests caused by a swinging incense burner crossing the designated lines of authority.  But all this pales compared to the shoot-out in 1846 on a Good Friday when Catholic monks and Greek priests argued over who would conduct the first service.   They fought with crucifixes, candlesticks and lamps before resorting to daggers and pistols.  40 lay dead before Ottoman soldiers broke it up.

Surprisingly, two Moslem families of long standing help keep the peace.  The Al-Judeh family protects the key to the church, handing it every morning at 4 a.m. to a member of the Nesseibeh family, who then opens the Church.  They try to mediate disputes among the Christians and  have been carrying out these hereditary duties since the mid-seventh century – 1300 years. 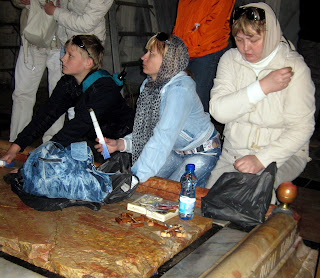 After reading Jerusalem, the Biography by Simon Montefiore (from which much of the above information is found), I was well aware of  Holy Sepulcher’s foibles.  But the church is so steeped in history and religious fervor, a visit is still a must. The tomb, the  marble slab where it is believed Jesus’ body was prepared for burial, a beautiful silver altar given by the Italian De Medici family, cross graffiti on walls of a hall where Crusaders marked their presence, and pilgrims visibly moved by the closeness to their Lord’s life all evidenced the power the Church of the Holy Sepulcher has exerted for 1700 years.  Many are transformed by their visit.  Hopefully, their prayers asked for the divisions to cease – a tall order for this complicated part of the world.