Portland, Oregon boasts of views of Mount Hood on a clear day, two rivers flowing through, and microbreweries galore.  But it has another unusual claim to fame.  Portland has led the way in the emerging industry of food carts and has the largest concentration of street food in America.   In fact, tours are now available for those who want to sample and learn more.

Our guide, Brett Burmeister of Food Carts Portland, began with questions – “Is any one vegetarian, requires a gluten free diet, or has food allergy issues?”   With 700 licensed food carts in Portland, he knew he could meet any needs.  Our group was only hungry and off we went on a beautiful summer day to explore the world’s cuisine made close.

This dining option emerged 100 years ago with hot dog stands.  Starting in 2006,  a shift from fair food to artist cuisine began.  Brett described the “good business model” as serving one or two unique items really well done.  Or more simply put –  finding your niche.   According to Brett, Nong’s Khao Man Gai makes the best chicken and rice, Noodle House has homemade noodles, and the Gaufre Gourmet uses a 300 year old recipe for dough instead of batter to create Belgium waffles.   The Swamp Shack fries up Cajun Alligator while The Frying Scotsman uses authentic haddock for its fish and chips.

The thriving food scene developed “organically”, Brett explained, with a “progressive interpretation of laws.”  This means they winged it.  Parking lots, called pods,  are now full of  carts, paying about $600 per month in rent.  After obtaining a license for $400 per year, the only requirement for the mobile food unit is to be on wheels, whether flat or not! Even though the kitchens range from one grill to fully outfitted stainless steel restaurant quality equipment, all are subject to inspection.  Costs for a cart range from $5,000 (used)  to $30,000 (new) and a premier parking spot can sell for up to $35,000 if a chef is anxious to get started. 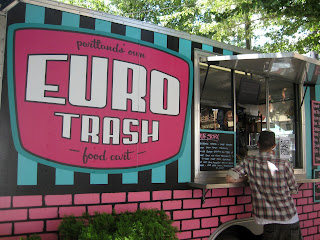 As a history major in college, Brett is drawn to the stories of the owners.  Charles Thomas spent two years in Spain and Portugal, working in bars and exploring the cuisine.  At his trailer, Euro Trash,  food is infused with the Iberian peninsula’s flavors.  We sampled lightly battered calamari, the best I’ve ever had.  At The Dump Truck, owners Reed and Julia learned how to make dumplings in China.  Their “Mr Ma’s” special was my favorite with pork, scallion and ginger.  The Grilled Cheese Grill had the best slogan – “Come by for a taste of your childhood.  Unless your childhood sucked, then we’ll share a taste of ours.”  (Note – Good grammar is not a requirement for good food.)

Since the only option for a meal is “to go” and since “to go” orders require containers, local environmental advocate Laura Weiss realized a lot of trash was being generated by the food carts.  Her solution is a plastic, reusable “Go Box” that can be brought to certain designated locations after use by subscribers.  Laura or her designee picks up the boxes, delivers them to the Hilton Hotel to be washed overnight, and then returns them to the appropriate food cart owner.  There are already 900 subscribers that save 7,000 containers a month. 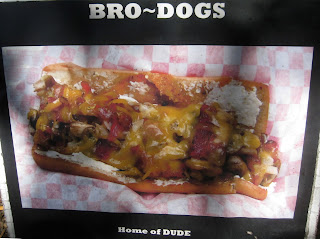 With all those choices, I’m embarrassed to admit my favorite food sample of the day was a hot dog from Scott at Bro-Dogs, a tiny outlet next to Veli Thai Food.  Scott’s enthusiasm for his lifestyle choice of careers was apparent.  Bro-Dogs is  home of “Dude” –  named for the reaction most have after tasting this speciality hot dog.   Scott also described it as “pretty girthy”.  Because we were on a food tour, he threw in some added ingredients to an already heavy dog – sausage, cream cheese, onion, mushrooms, bacon, cheddar cheese, fritos, macaroni and cheese, and a special sauce.  All were served on a unique one-piece hot dog bun designed by Scott that worked perfectly.

The food cart choice has now  spread into Texas providing quality international and local foods for a fair price.  Austin’s lots are on South Congress, the Dallas Arts District has three pod locations, and the new Ft. Worth Food Park is west of downtown.   Maybe our downtown should consider this emerging industry.   We certainly have the parking lots.  Here’s hoping.

One Response to “Portland, Oregon – Epicenter of Food Cart Mania”