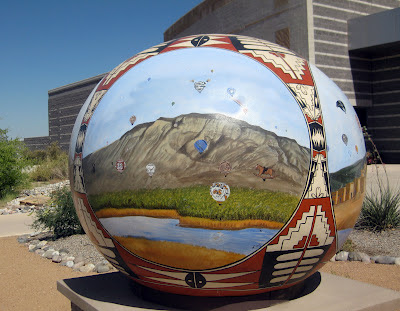 I first noticed the hot air balloon option for tourists at Angkor Wat in Siem Reap, Cambodia.  These extensive thousand year old ruins spread over 40 miles with the tallest peaking out over the surrounding jungle.  It’s hard to grasp the extend of the temples without an aerial view.  But what ascends must descend and landing in the dense vegetation could be painful.  The solution was a tethered balloon that rises straight up and hovers while riders enjoy temples from above.  It peaked my interest in a transportation form that has been around for over two hundred years. Thanks to the beautiful Hot Air Balloon Museum in Albuquerque, officially known as Anderson Abruzzo Albuquerque International Balloon Museum, I learned much more of the balloon’s history. 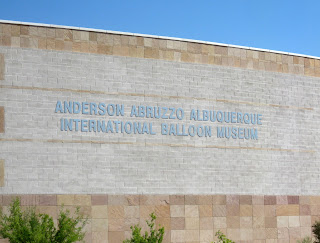 A duck, sheep and rooster were the first passengers in an hot air balloon launch attended by over 100,000 people in France in 1783.   The Montgolfier brothers thought it smoke that lifted the balloon and so used old leather shoes and rotten meat for the fire.  In the same year, helium was first used to lift the gondola or basket.  Those two sources of power (lifting) are still in use – the helium gas system for long distance trips and hot air for short rides.

Hot air balloons rise and fall depending on how much hot air is heated into or released from the “envelope” as the balloon is called.  There have been improvements over the years, the most important one coming in 1950 when Ed Yost invented the propane system.  Ed Yost site This made the journey much safer and more reliable, thus opening up widespread use of the balloon for war time and  strategic observation, photography, monitoring weather, and frivolity. 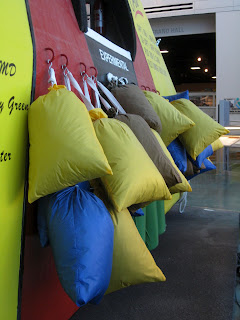 Helium powered balloons manage their altitude with ballasts – heavy weights that are tossed when the balloon gets too low –  and a valve to release gas if too high.  The records set by helium balloons are really quite recent.  First Crossing of the Atlantic – 1978.  First crossing of the Pacific – 1981.  First trip around the world without stopping – 1999. And first solo trip around by world in 2002 by Steve Fossett.

As interest grew in the sport, festivals sprouted.  Albuquerque’s International Balloon festival in September is one of the world’s largest with participant cut-off at 500 balloonists. At the museum, I visited with Tom Fisher, who took up ballooning after retirement 15 years ago. Fisher enjoys going up in Albuquerque because of the famous “Albuquerque Box.”  With mountains on both sides of the city and a southerly air stream at sunrise, an inflated balloon can travel south, be pushed to the west, rise up to warmer air heading north, and drop back east to the beginning – a box like figure.  International pilots love the box and thus the fame of the festival.

Tom gave some basic information.  “If you go up, you must come down”, thus the need to check weather first.    Eight to ten miles per hours is the maximum wind to fly, with no wind the preference.   “Light and variable winds” is a good forecast for launching.  Since wind currents are invisible, a small balloon called a pibal can be sent out to determine where air is flowing. Balloons also fly like a porpoise to find wind direction.   Wires are the major source of injury. In the United States, all pilots must be licensed by FAA and the balloon inspected every other year.  And never say “blow up” a balloon.  Inflate is the proper verb. 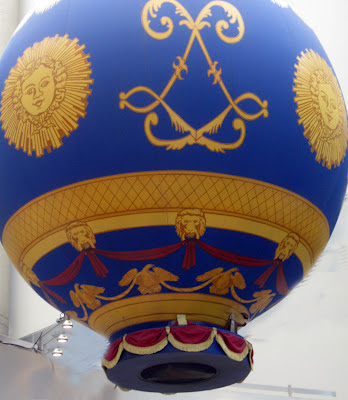 The museum offers a simulated ride in which you can guide the balloon by pulling one cord to go up and a second to descend.  There’s no such thing as a left or right turn unless the air currents take you there. Even with Tom’s advice, I still missed my target as I gained appreciation for the challenges of directing a balloon.

It’s easy to understand the widespread use of balloons in tourist areas, especially deserts where landings can be softer.  Balloon rides are advertised in the Wadi Rum sands of Lawrence of Arabia fame and are a well used option at Cappadocia  in central Turkey.  Balloons hover over Sedona, Arizona in the early mornings.  And they can take you over the Galilean hills of Israel, the southern Alps of New Zealand, and the red city of Jaipur in Rajasthan, India.  But for the many who will not be witnessing ruins  by air, the Albuquerque Balloon Museum gives an appreciation of the sport without a hard landing.