Castles come in all sizes.  The largest in the world is not the English Windsor (4th on the list) but Malbork Castle in Poland.  Thanks to many ad-ons for a growing list of Teutonic knights, it measures in at 143,591 square meters.  Compare that to the Montegualandro Castle in Italy with 3100 square meters of space and you’ve got yourself a cozy castle and a magical place to spend the night.

Soon after crossing from Tuscany to Umbria, we drove up a hill, around the castle’s moat and stopped in front of a 15 foot tall metal gate with spikes below. It had no doorbells or knockers.  We tried pounding on the gate with no response.  After honking our car’s horn, a window opened 30 feet up the smooth, stone wall and a woman’s voice called out “I’ll be right down” – a scene right out of Rapunzel or the Wizard of Oz.   The diminutive Franca Marti soon opened the gate and we walked into the castle’s courtyard, our home for two nights.

“We fell in love,” is how Franca described the couple’s quixotic quest to renovate this very old structure.  They had originally wanted a place in the country to build a boat but the castle cast its spell and became theirs in 1985.   After two years of planning and five of reconstruction, the couple moved in and opened four apartments for let.  Ours was in the former tower and, naturally, had rounded walls.  Another was built in the stables with wooden beams and tile floors.  A consecrated chapel from the 1200s was even available for meditation.

Perched on a hill supervising Trasimeno Lake in Umbria, the site for Montegualandro Castle dates back to the Etruscans. And Hannibal used the elevation to sequester troops before attacking the Romans in 217 BCE.  From our window in the tower, we could have watched as Hannibal surprised Roman Consul Flaminio and killed 15,000 Roman troops. 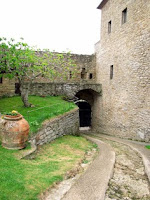 Thanks to the Martis’ efforts, the castle’s title history can be traced to Charlemagne around 800 CE when the land was given to one of his officers.    In the next 1200 years, it passed through several Counts and Dukes, became a (very) small independent state with its own dungeon,  was occupied by Ferdinando de Medici, and later sold to the Pope. One family owned the land for over four centuries.   Most recently in WWII, the Germans used it to keep an eye on troop movements in the valley below. 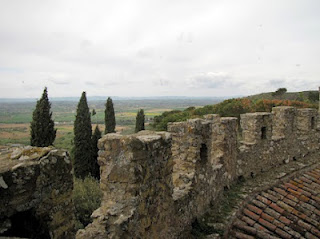 The next morning, Franca propped a long ladder on the inside castle wall and allowed us to climb to a wooden walk along the parapets and imagine life before canons and other powerful artillery.    Since castles were early home security systems, trees and bushes would have been cleared to prevent enemies from sneaking up the hill.   The old drawbridge,  now walled into a large reception room, kept strangers out as did the filled moat.  An inside well allowed  inhabitants to withstand a short siege.   And gun portals protected the soldiers as they fired.  In the beauty of the renovated castle, it was easy to forget that in reality, castles were often comfortless with dark, damp interiors and straw beds.

Today, the landscape is filled with olive orchards, decorative trees, and farms.  Mountains circle the panorama.  Boats crisscross Lake Trasimeno as tourists swim along the shores. A four-lane highway has replaced the dirt road from Perugia to Florence. The view is no longer tinged with anxiety and the castle walls aren’t for defense.   The Martis recognized the walled enclosure is now about culture.  Montegualandro has a long history of artists stopping nearby –   Galileo, Michelangelo, Goethe, Byron and Stendhal.    By restoring the castle according to strict Italian historical standards,  Montegualandro is again a wonderful venue for artists, concerts, weddings and visitors from small town Texas.