Lawrence of Arabia, that complicated Englishman who fought with Bedoin desert tribes for their independence after World War I,  endured days of travel by camel in the glare of the Wadi Rum desert of modern day Jordan but still fell in love with that silent valley surrounded by cliffs and towers approaching 3,000 feet.    He wrote “the crags are capped in nests of domes… They gave the finishing semblance of Byzantine architecture to this irresistible place, this processional way greater than imagination…vast, echoing and godlike.”   Today, Lawrence would be surprised to find his sandy, majestic world discovered by jeep safaris, hot air balloons, an international array of tourists, and a host of desert camps.

Our Jordanian travel agency wanted to book our last night in their country at a Dead Sea luxury resort but the chance to sleep in a traditional Bedoin tent of woven goat hair was far too tempting. Some modern Bedoin families still live in tents but transfer their camp and herds by pick-up rather than camel.  Others help provide a simulation of desert life, taking advantage of visitors’ curiosity. 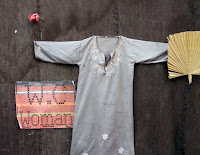 The Captain’s Camp is one of the original desert camps and obviously courts the international English speaking crowd.   Its tents circle round a sandy courtyard, using the rock outcrop as an additional barrier to prevailing winds.  A rug path led us to tent number 17.  We opened the heavy woven flap to find three single beds, one small table and chair, one mosquito net and a 30 watt bare light bulb.  More rugs covered our small space in the desert.  The surprisingly clean, communal bathrooms were down another rug path.  Only moonlight would give guidance if nature called in the middle of the night.

For our private camel ride, we joined Shaban, a seasoned, playful guide who loudly clicked and hissed at the animals if they acted up.  By leaning back and then forward, we moved with our awkward hosts as they stood, congratulating ourselves on our upper perch.   Within a few minutes we were away from the noise of the road, into the ancient sands and gently nodding with the camel’s gait.

Back at camp, Shaban invited us to sit with other drivers around a camp fire.   Traditional tea was shared while a new born baby camel and mother provided entertainment.  Modern life dropped in as Shaban visited with one of his small children on a cell phone, making noises that were funny in any language.  His dry-cleaned robes were also delivered then, solving my wonder at the whiteness of his vestment. 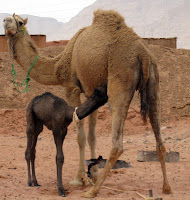 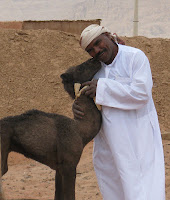 A traditional grilled lamb dinner, brightened by the wonderful middle eastern salad, was served on low tables with cushioned benches.  Young Jordanian school girls, visiting from Aqaba, insisted on teaching us local dances that required much jumping, belly movement, and laughter.   Lights were out for the whole camp at 9 p.m. but a nearby French family couldn’t stop laughing and some snoring persisted into the night.  Otherwise, all was quiet as only camps can be.

As with any discovered tourist destination, the Wadi Rum must be protected from overuse and Jordan intends to do that.  The Wadi Rum Protected Area is a UNESCO World Heritage Center in which rare wildlife is encouraged such as the wolf , ibix, and jackal.  Entrance to the protected area is limited.   Most of the desert camps and lodges are just outside the actual Wadi Rum but they are members of The Friends of Wadi Rum who are “ committed to the concept of Wadi Rum as a place for responsible, intentional individuals seeking meaningful, transformative experiences through time spent in our beautiful desert.”   That is a tall order to fill.  Hot air balloon rides and camel races are fun but probably not transformative.

Yet, a mere 24 hours near the grandeur of Wadi Rum connected us with an ancient desert life that is rapidly disappearing.  The wind blown silence of the camel ride,  tea around a jolly campfire, and the night protection of tightly woven tents gave  just a hint of that world – a world  Lawrence of Arabia would still recognize – and a far more meaningful experience than a night in a luxury resort.

One Response to “Captain’s Camp, a desert camp in Wadi Rum, provides taste of Bedoin world”