Greenville has several claims to fame – Audie Murphy, black soil, cotton history, and most recently L-3 Communications, formerly E-Systems.  For  years, I was only familiar with the I-30 corridor  and the football stadium for high school soccer games.   But upon closer inspection, Greenville has some charming places to shop and dine.

Downtown has been greatly enhanced by two wineries, including  Landon Winery, the 10th largest production winery in Texas.  Its bottles fill a wall of this former Kress building and the City Bistro Restaurant spreads out in the remaining area.  The menu is Italian which can be enjoyed inside or alfresco on the large patio.  The more laid back  Blue Armadillo Winery has portable chairs so a group of friends can easily gather round tables and enjoy the live music scene each Friday and Saturday.  With a motto like “Wine a little, you’ll feel better”, how can you lose.

Also downtown is the Art Deco Municipal Auditorium which I drove past before recognizing.  In this 1938 building, the Dallas Orchestra performs three times a year, its only location outside of the Metroplex.  The 1700 seat space is also home to the Kenneth Threadgill series. And it boasts of a performance by Elvis Presley when the jail was actually below the auditorium and prisoners could be heard cheering him on.  Don’t be misled by the City offices which are also housed here.  The performance hall is upstairs and towards the rear. 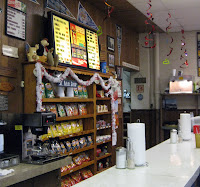 In its same location since 1941, C.B.’s Sandwich Shop is really a great hamburger joint. The owner’s father and uncle passed the business down to him.  When asked if the recipe had changed over the last 70 years, he replied, “Why?”  Fortunately for patrons, the Sandwich Shop continues to serves great burgers and fries to a loyal and friendly population, some of whom remember when burgers sold for 25 cents.

After years of passing this by, I finally visited The Audie Murphy and American Cotton Museum.  It’s an interesting combination but both appropriate for Greenville.  The City was once home to the world’s largest inland cotton press that could compress 2076 bales in a day – a record that has not been surpassed.  Children will enjoy the different colors of natural cotton and the many products, such as ice cream and peanut butter, that contain cotton oil.  Today, only one large cotton farmer remains in Hunt county but Greenville will always be grateful for its historical presence.

On the Audie Murphy side of the museum, the most decorated veteran of World War II is honored as well as veterans from the Civil War to the Iraq conflict.  Murphy, a Hunt County native,  was fearless in war as well as in his later movie star days.   The museum still gets international visitors from towns Murphy liberated in WWII.  It’s a great history lesson for kids and adults.

From the outside,  Uptown Forum appears to be another historic building.  But the inside is beautifully restored and houses something for everyone.  Guys will be immediately pulled to the Greenville Hobby Depot, an increasingly rare railroad hobby shop.  Women of all ages are drawn to The Calico Cat, a contemporary clothing and gift shop.  I was happy to discover their large collection of Israeli Naot shoes, not an easy brand to find.  Also downstairs is Millie’s Kitchen that promotes its freshly made sandwiches and salads.  Her Kitchen Sampler is the most popular dish.  This is well worth a stop.

A true hidden gem is Casa Vieja, opened in 1996 by Raul Campos, a chef trained at The Mansion in Dallas, who fuses his Jalisco, Mexico heritage with Southwest cuisine.  In this very modest house, one can enjoy Red Snapper a la Veracrusana, Shrimp a la Diablo and even Sea Bass or Steak Ranchero.  The chips are served with three sauces – black bean, tomato and tomatillo – and a mango, raspberry creme brulee awaits your dessert order.  What a nice fusion surprise.

Other notable stops include Ernie’s BBQ, a Greenville staple for generations, and the numerous antique stores downtown, some with their own ghost stories.  A must destination for anglers is the 54 year old  Sabine Bait and Tackle Shop south of town which carries a large selection of bait and hooks as well as hard-to-find fishing poles such as the 16 foot Calcutta Cane Pole made in Vietnam.  All of this makes it well worth pulling off  Interstate 30 for a look at Greenville.