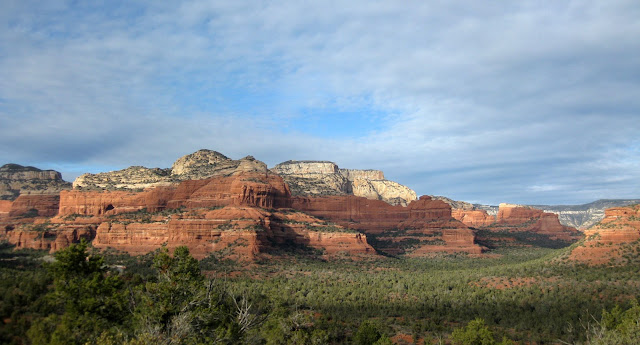 Tourists visit Sedona, Arizona for as many reasons as there are strata in the surrounding canyon walls – made beautiful by the collision of the Sonoran Desert with the Colorado Plateau.  Until recently,  Sedona’s history was not that different from other desert towns.  Native Americans respected the area as a site for sacred ceremonies and it played a key role in the story of the beginning of man through the Kachina woman in Yavapai/Apache lore.  Coronado and his conquistadores mapped the area in the 1500’s.    Pioneer farmers planted orchards near the waters and ranchers spread out their cattle and sheep.  It was quietly discovered by retirees and some artists in the 1950’s and 60’s including Max Ernst.   But in 1978, the attitude and crowd changed.

Paige Bryant is a well known psychic who lived in Sedona in the late 70’s and 80’s.  She felt  strong energy sources emanating from below and above the earth – cosmic portals.   Her description of four vortexes of electromagnetic energy began to draw spiritual tourists.  By 1987, Sedona was one of the hosts for the Harmonic Convergence, the world’s first globally synchronized meditation or human intention for the good of the planet.

Soon the Chamber of Commerce, hotels, and restaurants saw the potential in a united presentation of the energy sources in Sedona.   On their maps, small tornado vortex forms hover over Bryant’s sites of Boynton Canyon, Cathedral Rock, Airport Mesa, and Bell Rock.  Crystal shops and yoga tours followed.  The phone books now lists 11 local psychics who can help your sensitivities.

By the 1990’s, the attraction of Sedona’s beauty could no longer be contained.  Larger resort companies such as Hyatt began buying out ranching families and turning the desert into sun retreats with golf and other amenities.  Time shares proliferated.   More retirees came as did movie stars.   And, of course, the service population grew with the tourist industry although most of those employees must commute from nearby towns with a lower cost of housing.  The average cost of a home in Sedona is $394,000.

Businesses along the main drag reflect the hodge-podge offerings for the two million tourists visiting this town of 12,000 inhabitants each year.  Jeep Rentals compete with Crystal Magic for customers.  Hot Yoga and Canyon Outfitters appeal to different crowds.  Cashing in on a more recent industry, the Sedona Wedding Studio vies for the destination couples.

The religious world is just as mixed.    A variety of Baptist churches, a single Cowboy Church and the usual list of mainline Protestant denominations compete with Mormons, the area’s largest group.  The stunning Holy Cross Catholic chapel,  designed by a student of Frank Lloyd Wright,  peaks out between two large red rock towers,  rumored to also be a vortex site.  And the laid back crowd is treated to a rare, western Buddhist Stupa, considered to be the living presence of the Budha and to have healing powers.  Its affect is reflected in the many Buddhist rock cairns built on and added to the trails of the area.

The result of this cauldron of interests is something for everyone.   Hikers happily choose from a maze of trails in and out of the red canyons.  Meditators easily find a quiet spot  to inhale earth’s energy. More sedentary  adventurers ride in pink jeeps that haul them up to mesa tops for a full 360 degree view of the geological wonder.   In the mornings, hot air balloons linger above.  Golfers soak in the clear air and temperate climate for months of playing time.  And, everyone seems to pull off the roads in the late afternoon to take in one more glorious sunset.

Sedona’s Community Plan acknowledges the challenge of maintaining local character and quality of life while ensuring a quality experience for the visitors.  The balance is delicate,  especially at high season.  But Sedona’s been dealt an amazing hand of light, air, and beauty that will continue to draw crowds.  And whether it’s spiritual solace or spa soaks, Sedona will deliver – as it always has.