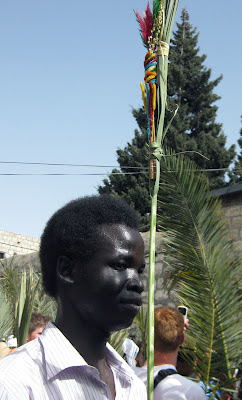 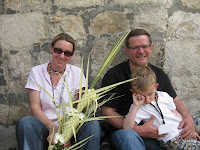 Palm Sunday has always been a favorite service, especially for children.  It celebrates the story of Jesus unexpectedly entering Jerusalem on a donkey.  His followers hurried to line the streets and waived branches and laid coats before him.  Traditionally, palms have represented triumph and victory and have become associated with this Sunday.  Many churches use processions into or around the church to recreate Jesus’ path through Jerusalem.  I had the opportunity of experiencing Palm Sunday where it all began.

Our Palm Sunday actually started in Bethlehem, at the Church of the Holy Nativity.  Occasionally, the church calendar for the Orthodox and the Latin churches are aligned, meaning Palm Sunday and Easter are on the same days.  This caused  services to be staggered that day so all could enjoy their palm processions. 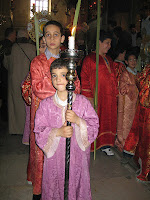 As we awaited the start of the Greek Orthodox service, I watched the young altar boys dressed in purple jab at each other as kids will do universally.  But soon the chanting began and the long procession slowly circled the church led by the priests, incense burners, acolytes, banners, choir, and then church members, all carrying palms or olive tree branches.  That service would be followed by the Armenian rites.  A separate space serves the Latin church as the Roman Catholics are called in Israel.

Later that day, we crossed back through the Security Wall and saw many Bethlehem residents hurrying to participate in the Palm Sunday processions in Jerusalem.  Because of the crowds, our cab driver could only drop us off several blocks from the start of the Latin parade on the Mount of Olives.  The atmosphere was surprisingly jovial and international.  While we waited, local children peddled palms and olive branches. Spontaneous songs broke out from the diverse groups around us. 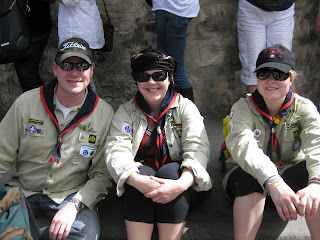 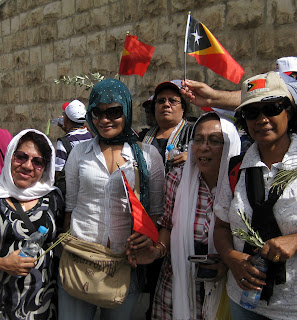 I grabbed one of my sisters-in-law and we started walking up the street.  “Where are you from?”, we asked many.  Poland.  The Philippines.  France.  Korea.   Jerusalem. The Maldives. Russia.  Spain.  There were American Mormon teenagers from Nevada,  Girl Scouts,  Boy Scouts,  and a tour group with identifying green kerchiefs.  Gimme hats indicated other tours – “G&S Travel” or “Shepherd’s Since 1965″.  A large contingency hailed from Timor Leste – a sliver of a country near Indonesia that is 96% Catholic and which has only recently begun recovery from years of wars.  All smiled broadly as we snapped their pictures. 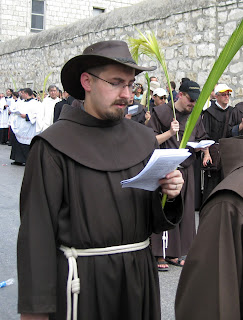 The procession began quietly with a few Israeli soldiers leading the way.  But it soon reflected the diversity within the greater world of Christianity.  Six foot palms marked the beat with the drums in a large group from Africa.  Praise songs and dirges were piped out of speakers held by pilgrims.  Franciscan monks, with Crocodile Dundee hats,  carried songbooks and were accompanied by tambourines and guitars.   An elderly woman wearing a hat displaying her mother’s picture  was pushed in her wheel chair.  There were priests by the dozens and nuns of all colors.   At times, it felt like a small town parade.

In the past, a person playing Jesus would ride a donkey at the end.  But, today, the Latin Patriarch of Jerusalem, Foud Twal, brought up the rear.  In his resplendent pink robes and gold-rimmed sunglasses, Twal, also the Archbishop of Jordan, carried only a small olive branch.   Those on the sidelines could join the procession at any time as it descended from the Mount of Olives, entered through Jerusalem’s Lions gate, and terminated at the Church of Sainte Anne.  Israeli soldiers provided a rear guard. 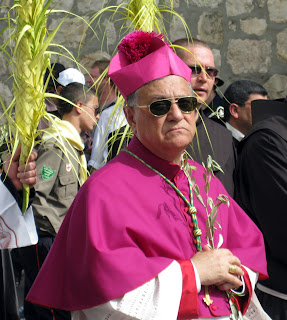 The Catholic procession was not the only one that day.  The Greek Orthodox and Coptic Orthodox schedule services in the Church of the Holy Sepulchre as do the Armenian and Syrian Orthodox.   From 1 to 6 a.m. on Palm Sunday, Ethiopian Orthodox members play drums, cymbals and tambourines and celebrate Mass.  We also saw the last of a procession outside Old Jerusalem’s wall that was just ending at 5 p.m.

Palm Sunday signals the beginning of Holy Week for millions of Christians.  The next few days are always  more somber and reflective.  But on that beautiful Sunday afternoon in Jerusalem, the mood was light, the music varied, and the atmosphere inclusive.   For that moment, the divisions in Christianity seemed healed.