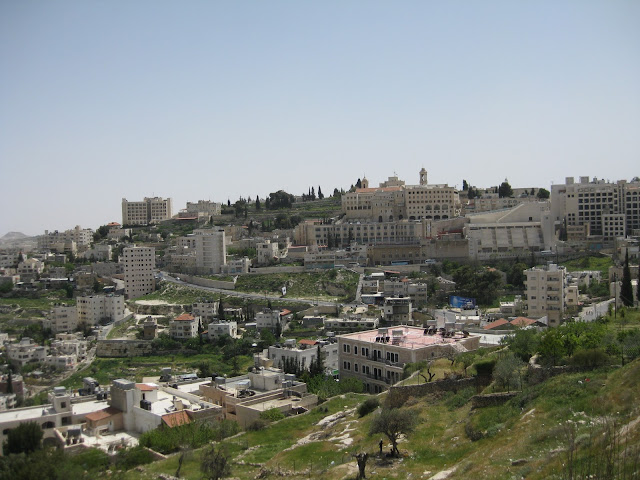 O little town of Bethlehem,
how still we see thee lie;
above thy deep and dreamless sleep
the silent stars go by.
Yet in thy dark streets shineth
the everlasting light;
the hopes and fears of all the years
are met in thee tonight.

What a beautiful scene this hymn describes – a small, quiet, peaceful town  hosts the birth of Jesus.  In the Bible, God’s physical presence on earth begins quietly.  Yet, the reality of Bethlehem today plays out in the rough and tumble  politics of the area. 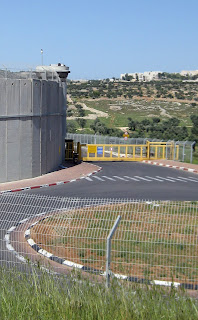 Bethlehem is really a suburb of Jerusalem – a mere five miles separates them.  It hosts the largest population of Christians in Israel and has traditionally been a required stop for pilgrims to the Holy Land.  Until 2006, this was an easy bus or taxi ride away.  Because Bethlehem is located in the West Bank, excursions became more complicated when Israel built a security wall to protect Jerusalem from terrorists.  Bethlehem is now separated from her neighbor by a 26 foot tall concrete fence, 14 feet taller than the Berlin Wall.    Israel defends the necessity of this partition as it has significantly reduced bombings and deaths.  Bethlehem argues the wall has separated families and friends, hurt commuting workers and  frightened away tourists.

Our day trip from Jerusalem to Bethlehem began with a taxi ride to the Security Wall.  The Jordanian driver (married to a Palestinian woman) phoned his contact on the other side of the wall to be sure we would be met.  We walked down a long, narrow passageway  into a metal building. Those ahead of us had to place their hands on a fingerprint pad for verification.  But  Israeli checkpoint guards didn’t even inspect our passports and waved us through.  After another long, winding walk, we exited to a crowd of taxi drivers.  Fortunately, Adnun, our guide, spotted us. 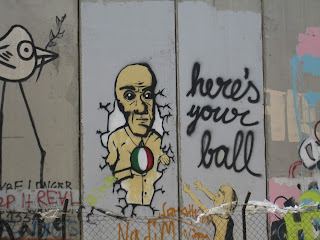 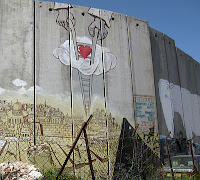 The short drive into Bethlehem followed the Security Wall,  filled on this side with graffiti and anti-Israel comments.  Adnun pointed out Bethlehem University which is financed by the United States and other European Countries.   Their police are also trained by U.S. forces.  Yet, he claimed tourist numbers are down due in part to our State Department’s warning against travel in the West Bank. As a Christian working in the tourist industry, Adnun was frustrated by this.  He had kind words for “The Lonely Planet” travel guidebook who strongly encourages readers to base their stay in quiet Bethlehem rather than the more expensive Jerusalem. 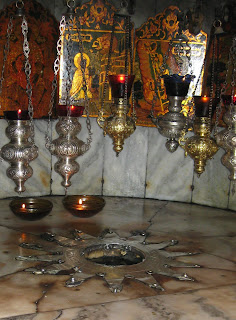 We visited The Church of the Nativity, where Palm Sunday services were being celebrated by the Orthodox Church, followed by the Armenians, and then Roman Catholics.  A new placard was hung each time the service changed.  Thanks to our guide’s persuasive ability and our claim to speak Spanish, we were allowed into the small grotto below the church for a celebration of a Spanish Mass. This is sacred territory, where it is believed Jesus was born – not in a stable but a cave.  While we waited, a tearful, blind woman was led by a family member to reverently touch  a silver star on the marble floor, indicating holy ground below. 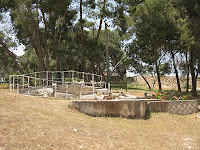 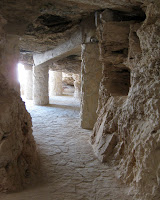 Also in the Christmas story are shepherds in the field watching their sheep at night.  In that time, many shepherds lived in caves that were large enough even for their flocks to stay at night. At the “Shepherd’s Field YMCA”,  located at the edge of Bethlehem, a cave typical of the time of Jesus has been preserved in its rural setting..  We had to honk outside the gate to be allowed in, the only visitors that day.  The cave was spacious, cool, and surprisingly comfortable.  And it was here, away from the crowds of the Church of the Nativity, the politics of the Security Wall, and the ever present traffic, that the air of 2000 years ago could be breathed and the story imagined. It was a quiet moment when Bethlehem was as still as in the carol we sing and as peaceful as we can only hope for the entire region.