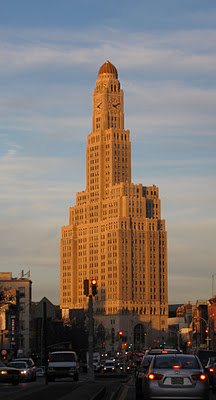 Pop quiz time.  Which of the five boroughs of New York has the most residents? Which claims that one out of every six Americans can trace an ancestor back to it?  And which borough would be the 4th largest city in the country if it were an independent city?  The answer is Brooklyn.  At a population of 2.5 million, it is twice as big as Dallas.  Yet, few visitors venture past the East River to this community rich in architecture, ethnic cultures and history.  We had an opportunity to explore it during a Thanksgiving visit to our son’s new residence. 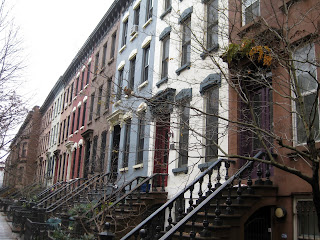 Life long Brooklyn resident, “Big Rick” Kadlub, guided us the first day on a walking tour.  He has watched real estate prices soar in recent years by those looking for a better bargain than in neighboring Manhattan.  Thanks to a four story zoning limit, much of Brooklyn feels like a neighborhood and is being rediscovered. The Park Slope area is an example.  In the 1950’s it was an enclave for Italians and Irish, filled with Latinos and African Americans in the 60’s. was joined by artists in the 70’s and discovered by young professionals in the 90’s.  New families now fill the beautiful brownstones and frequent the many restaurants.  Big Rick shook his head in wonder as hundreds of residents stream out of nearby subway stops in late afternoon – a stark contrast to the trickle of commuters in the past. 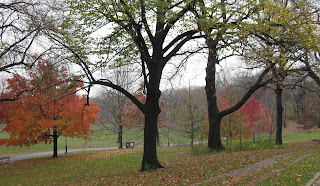 While most Americans know of Central Park, few are aware of Brooklyn’s Prospect Park, designed by the same Frederick Olmstead.  In fact, many consider Prospect Park superior to its Manhattan cousin and I have to agree.  Six hundred acres of forest provides strolling paths, the largest park meadow in the country, Brooklyn’s only lake, a zoo, birding opportunities, and an outdoor ice rink.  Next door are the Botanical Gardens,  Art Deco public library filled with books in 70 languages, and the Brooklyn Art Museum, a near replica of the Metropolitan Museum of Art, that houses the first feminist gallery and its famous Dinner Party installation by Judy Chicago. 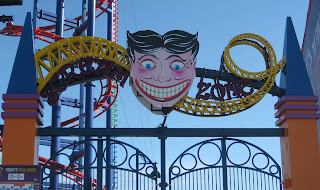 On our second day, a 20 minute subway ride took us to the grandfather of all amusement parks, Coney Island.  The subway exit opens directly across from “Nathan’s World Famous Frankfurters since 1916″, a required stop even though it was only 10 a.m.  We joined Al Capone, Cary Grant, Jacqueline Kennedy, Winston Churchill and the King and Queen of England as samplers of these surprisingly good hot dogs.  Across the street was the equally famous amusement park, sadly closed for the season. 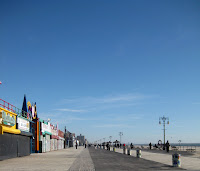 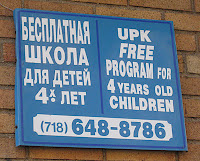 The boardwalk along the Atlantic was even better than I had hoped for.  We merged with a leisurely crowd of mostly elderly pensioners strolling down the well-maintained wooden walk.  The clean beach was almost empty but could clearly hold the masses in the summer.  As we approached Brighton Beach, a Russian immigrant stopped to chat and tell us how much he loved America.  Originally built as an exclusive resort for the wealthy in 1909, Brighton Beach has most recently become the largest Russian community in New York.  Russian restaurants lined the beach and along Brighton Beach Avenue.  Bilingual signs advertised child care and dental offices. And a liquor store with a lit neon hammer and sickle boasted of many kinds of vodka.  We enjoyed a lunch of traditional Russian fare such as pelmenis and varkenikis. 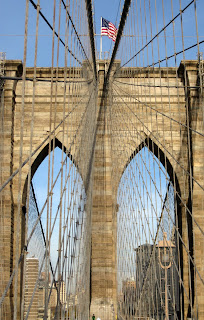 On the last morning,  we walked with our one year old grandson across the 128 year old  Brooklyn Bridge and introduced him to the Manhattan skyline.  Through the weblike cables, the Statue of Liberty beckoned.  And on the return walk,  Brooklyn spread across the horizon.  Now no longer just one of the boroughs, Brooklyn had proved itself a worthy travel destination with much more to be discovered.  I look forward to it.