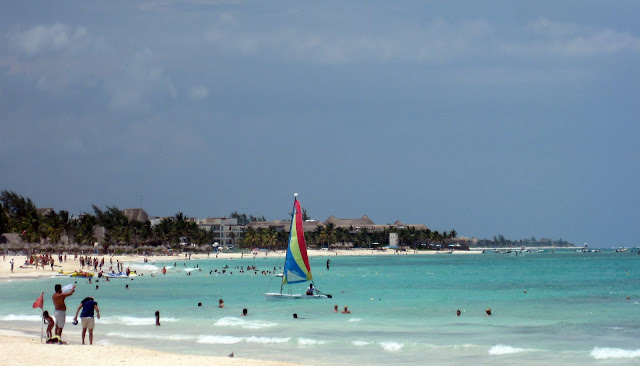 I last visited  Mexico’s Yucatan Peninsula in 1975, when my husband and I spent our honeymoon there.  We were poor, ill-prepared and rode buses to the ruins of Chichen Itza and slept in hammocks at Isla Mujeres.  Since development at Cancun only began in 1970, there were just a handful of hotels and about that many tourists.  When I returned this summer to the now named Mayan Riviera for a family wedding, I was dumbstruck by the changes.

Our Continental flight from Houston was filled with summer clad tourists who happily accepted the offer of beer or Margaritas in the air.  At the Cancun Airport, the control tower was even wrapped in a large ad for Corona beer.  Planes from around the world nosed into their gates –   Air Canada, Air Cubana, and even the English Thomas Cook charter known for packaged holiday tours.  Twelve American airlines and thirty-one foreign ones now serve this very busy, modern airport where English is the first language of announcements.  An enormous customs hall filled with agents processed the approximately 1,000 arriving travelers within 30 minutes. 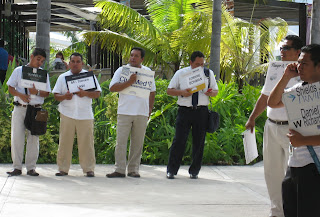 Outside, a squadron of white-shirted tour representatives held  placards as they searched for their named tourists.  Fortunately, mine was in a red shirt and easy to spot.  We chatted while awaiting the emergence of my sister-in-law. He felt about half the tourists came from Europe and half from the United States and Canada.  It had been slower this year, he said, but that was hard for me to gauge.  I did note the outdoor bar for those who just couldn’t wait.

The drive from the airport to our resort was along the four lane Highway 307 linking the 79 miles from Cancun through Playa del Carmen to Tulum in the south.  Spread along this road were literally hundreds of hotels and resorts.  Trip Advisor lists 258 hotels in the area.  Some are for adults only, others have great children’s programs, many are all inclusive and a few are for budget minded travelers.  The larger hotels cover acres and have pyramids peering over the trees.  One driver described them as “pueblitas” or little towns.

Security is a major concern today even though this area has not seen the crime waves reported in other parts of Mexico.  But the hotels take it seriously.  At each of the resorts for the two couples in our van, a guard at the gate checked the guest list before allowing us through.

Our resort, the Royal Playa del Carmen, faces the beach in the middle of the town of Playa del Carmen.  While it had no gate, security was heavy around the large driveway. We also saw policemen patrolling the area with regularity and even one handcuffed man being whisked away.  But there was never a moment that we felt at risk, even as we strolled the streets of the town. 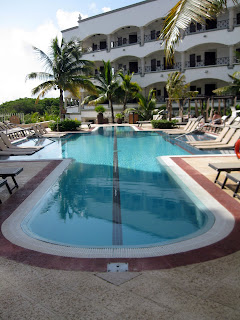 Our hotel shone with  marbled floors, manicured lawns, numerous swimming pools and was filled with approximately 1500 friendly, hard-working employees who greeted us with “hola” and a hand over their heart.  It was a far cry from our motel at Chichen Itza years ago where we were just happy to have air conditioning.  This was also my first “all inclusive” experience and I could get used to ordering freely from the menu and not having to calculate tips after every meal. The choices were international with many fusion dishes but the portions small.  If you were still hungry, just order another course – which was true of the weak drinks they served. 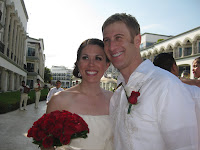 Destination weddings are increasingly popular because of the romantic settings, reduced costs and  shortened guest list.  At our niece’s lovely wedding, we enjoyed  a familiar ritual in a tropical setting.  White gauze entwined the ocean front wedding gazebo where I had enjoyed a yoga session that morning.  Chairs with white covers were arranged on two sides of the aisle and parasols available for those in the sun.  The groom’s brother-in-law officiated even though he had no real power. The bridal couple had married in a civil ceremony in California before coming.  Evidence of our presence south of the border were numerous. Throughout the service and dinner reception, live and recorded music played from a harpist, Mariachi band, and a great DJ.   Groomsmen wore white Mexican shirts and sandals and sunglasses soothed the eyes of guests.  The wedding party had shots of tequila after the service while the hors d’oeuvres displayed all the wonderful fresh fruit and flowers available in those parts.

The resorts on the Mayan Riviera do provide a relaxing environment to eat, drink, sun, swim as well as marry.  Although the quality of lodging has changed significantly since our first trip there, the clear blue-green waters and white beaches haven’t.  I’ve long noticed how few Americans are traveling in the out-of-the way places I frequent.  But I found them on the beaches of Mexico, enjoying a taste of luxury at reasonable prices.