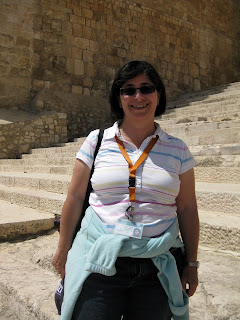 I had heard jokes about the number of guides in Israel as in “everyone in Jerusalem is a tour guide”.   There are reputed to be over 10,000 licensed guides in Israel. That same percentage for the United States would equal about 350,000 guides!  I didn’t appreciate the “licensed” part of the title until meeting our guide, Gila Rosenfield.

Gila was recommended  by a mutual friend  which is how most clients come to her – by referrals.  She is, actually, a typical guide who was raised in a Zionist family outside Israel (Zimbabwe), came there in her 20s to work on a kibbutz, and stayed.  After six months, she moved to Jerusalem to teach.  As she noted, “socialism sounds better as an idea than in practice.”    When a friend encouraged her to be a tour guide, Gila applied and was accepted into the Ministry of Tourism’s School of Tourism.

This is a two year program that is anything but easy. A psychological exam is given before admitting a student.  And then the courses are intense.  Here is a description of the required subjects: “These are quite intensive and difficult studies including: prehistory, ancient and middle ages, the modern State of Israel and the region, and all nations that lived there in the past. … Israel tour guides need to be versed in basic archeology, geology, climate, flora and fauna, ornithology, architecture, zoology, etc. In the school, Israel tour guides study the legal system of the past and present. Hundreds of study days in the field accompany the course work … as well as exams.” Jewish, Christian, and Muslim guides are all required to be licensed.

Gila took the courses while still teaching kindergarten.  After being certified, she used her school sabbatical to try her hand at guiding.  Not only could she make more money, but Gila thrived on sharing her immense knowledge with foreign visitors.  Fifteen years later, we benefitted from her studies and enthusiasm.

Each morning, Gila arrived with her satchel full of study aids for that day’s sites.  She was sensitive to the fact that she was Jewish and we were Christians.  On the first day, we followed the Stations of the Cross.  Gila was careful about describing what could actually be proved and what required the Jerusalem phrases “it is believed” and “if you believe it, it is true.”  Since Judaism, Christianity, and Islam all share the Old Testament, Gila could also easily point out Old Testament sites and help us with the history of the First and Second Temples.  We passed through the Muslim, Christian, and Armenians quarters that day.

On the second day, we moved into the Jewish quarter and delved more deeply into archeology – a very political subject.  Gila stays up with the latest news through an online magazine and newsletter called Biblical Archeology Review (BAR.com).  She was well aware of the great archeological divide between the skepticism of the secular Tel Aviv Archeologist, Israel Finkelstein, and others who are convinced they have found proof of David’s palace in recent discoveries.  Intense excavation under the Jewish Quarter after the destruction from the 1967 War has revealed many details of life two thousand years ago. 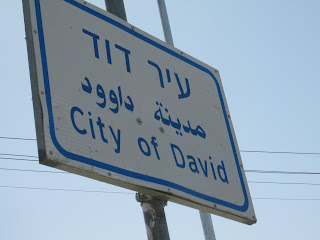 Current day digs continue in the City of David area just outside the Old City walls.  We were reminded of the fairness of our guide as we exited the excavation area.  Two young women, one Jewish and the other Arab, were handing out pamphlets warning “What your tour guide is not telling you”.  Much of that site’s excavation was happening under Palestinian homes whose residents were fearful of cave-ins but who couldn’t afford to sell.   Fortunately, Gila had already educated us on that issue and she made sure the protestors knew that.

As with any good guide, we were able to ask Gila anything about modern day Israel and she answered honestly.  There were parts of life in Israel that frustrated her such as the stronghold that the conservative Haredim families have on the government and its dole and the lack of compensation for Palestinian families after the ‘67 war.   Yet, she would be nowhere else.  She talked proudly of “when we united Jerusalem” and of how life goes on in Israel despite the pressure surrounding it.

At the end of our last day with her, Gila took us to the literal center of Jerusalem, a second floor walkway that had been built over the old Roman Cardo street. She pointed out the Arab quarter with flat roofs and TV dishes, the slanted, tiled roofs of the Christian quarter that were modeled after European homes, the small hidden Armenian quarter, and the Jewish quarter dominated by its beautiful new synagogue.  As we rested, the call to prayer began in stereo sound around us from many minarets.  Gila then read about Jerusalem in Psalm 87 as translated by our mutual friend, Lynn Bauman.  “ You see, it is a homeland, a sacred birthing place, for all people across the world.  And there God’s presence dwells, and draws them in, and makes them all her own.  So each soul leaves that place a singer and a dancer, saying ‘All my fresh, creative springs flow out of you, my Mother.”  Thanks to Gila, we left Jerusalem better informed, sympathetic and a singer and a dancer.