Jordan is a small country carved out of the 1919 Paris Peace Conference after World War I.  The current King Abdullah, of the Hashemite family,  is a descendent of King Abdullah who first ruled the new country.  It is still proud of its Bedouin heritage – those tribes that roamed the deserts and fought fiercely.  While most of its people live in Amman and other cities, Jordan’s countryside reveals a bygone time as well as the country’s emerging economy.

We crossed from Israel at the Allenby/King Hussein bridge, a tedious procedure through seven checkpoints that cost two hours going and three hours back. When we finally got on the road to Petra, our driver, Moreed, maneuvered the back roads along the Jordan river. Tents of modern day Bedouins still dotted the landscape but were now also made of canvas, thatched grass, cardboard, plastic sheets and newspaper as well as the traditional woven goat’s hair.  Rock cairns marked a shepherd’s grazing field.    In May, the tribes load their pick-ups and move to the cooler high altitudes in the near-by mountains.  Camels are still raised for meat, not travel.  Our driver insisted their meat had medicinal value as Bedouins didn’t have cancer! When we stopped to photograph the sheep and goats, a shepherd in modern day pants and jacket asked if he could brew us some tea from the makings in his pack.  We reluctantly declined.

Also in the lower elevation were irrigated  fields of vegetables and fruits.  At the end of a row, the neighboring dry desert land lay fallow.  Further down the highway were orchards of medicinal herbs and aromatic plants that provide two per cent of  Jordan’s exports.  The Hawthorne tree is one example whose products are reported to reduce blood pressure and treat heart ailments.

Soon, the Dead Sea approached with its deep blue-green colors and white salt crystal beaches.  Jordan has a major development of high-end hotels along these waters. Marriott, Crowne Plaza, and even the Holiday Inn are just some of the chains that have built large facilities with beaches, pools, spas, and restaurants.  The Dead Sea water is buoyant enough to sit up and even read a newspaper.  ts minerals make the water silky and the temperature is perfect for a refreshing float. Jordan is far ahead of Israel in promoting the Dead Sea as a resort destination. At the end of the Dead Sea,  factories mine potash and salt from the water – all for export. 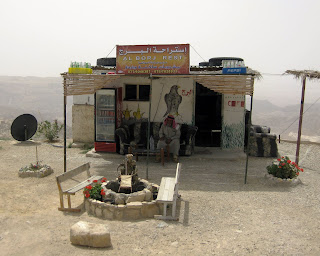 Turning east, we began the climb through a moonscape of dry mountains with our lone road providing the only color contrast.  At the top of the ridge, an outpost straight out of Star Wars sported a photo of King Abdullah, rug covered benches, and the head of a gazelle. A  turbaned Arab in his jallabiya robe, offered drinks as he lounged on his black leather couch under the thatched porch.  Only the TV dish and refrigerator betrayed the scene as current.

We soon turned onto The King’s Highway, one of Jordan’s two north-south corridors.  The road dates back to Biblical times when Moses lead his people to first see the promised land at Mt. Nebo.  If accompanied on this highway by a Bible, Koran,  history book, and a good archeologist, one could check off Biblical sites, Roman fortresses, the massive Crusader castle at Kerak, fine Christian mosaics, a 1918  battle site for Arab Independence at Al Tafilah, early Islamic towns, a Shia holy shrine and the Nabataean capital of Petra.  Add in the geological wonder of the Wadi Mujib, Jordan’s Grand Canyon, and your Jordan bucket list just got smaller.

Coming off the central mountain ridge, we joined the Desert Highway, the primary four-lane, commercial freeway from Amman to Aqaba at the Red Sea.  Immediately, we were surrounded by trucks moving freight to and from the port.  Signs for Iraq and Saudi Arabia reminded us of their proximity.    Despite the barren land, efforts were being made to beautify the road with patches of newly planted bushes, watered by small, elevated tanks.  Alongside the road was an incongruent scene of large pipes being buried to transfer sweet, subterranean water from the desert to Amman.

We passed several security checks for drivers’ licenses, an opportunity for the policemen to rib our driver about being with three women.   Bedecked Bedouin drivers passed us in their pickups talking on their cell phones, a notable change from camels of the past.    Yet we were still advised to watch for the “ships of the desert” on the road.  And signs of the past included a decaying Turkish fort and an army base made sparse by the abolition of the draft in 1978.

During our four short days on the road, Jordan’s past and present were on display. From the busy Red Sea port of Aqaba through the historical Wadi Rum desert of Lawrence of Arabia fame, to the pink carved sandstone of Petra, the small country is capitalizing on its beauty, history, and geography.  Its economy benefits from the trucks and the tour buses – an alliance that serves this petroleum absent country well and tourists most.

One Response to “On Jordan’s Roads and Highways”