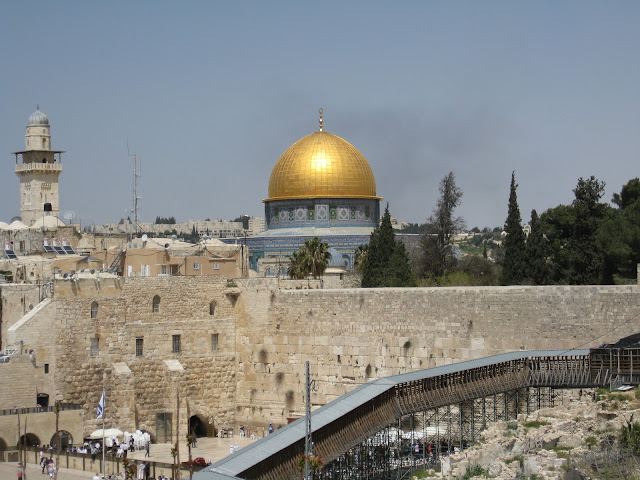 “Israel and Jordan” I would reply to inquiries of my next trip.  What followed were wide eyes, momentary silence, and the following “Aren’t you afraid?”.  The last question is a product of our instant, sensational news programming.  Statistically, I was in no more danger traveling to Israel than a quick trip to Dallas.  Other than references to Foreign Terrorists Organizations and sudden Israeli crack-downs in the West Bank, the U.S. State Department could only warn travelers to Israel about car break-ins and an occasional purse snatching. And, despite the Middle East turmoil, the State Department warnings haven’t changed since last year. Yet,  many visitors still hesitate to come.

One obvious difference between a trip to Dallas and one to Tel Aviv is the lack of an underlying, simmering tension among Israel, the Palestinians, and neighboring states.  Stories that appear in international papers are frightening.  Just two weeks before we were scheduled to depart, an Israeli family in a West Bank settlement was murdered at night in their home. For the first time in four years, a bomb went off at the bus station in Jerusalem and one person killed.  And rocket missiles were once again being fired from Gaza into southern Israel.

I wrote our contacts in Israel, asking if we should be concerned.  Our landlady’s response – “Not at all”, our friend’s answer – “Not enough to cancel”, and our guide’s thoughtful reply “Of course this attack brings back fears but we Israelis try not let  atrocities like this change our lives…  so life pretty much carries on as normal.  Due to the attack, people are being more vigilant and careful and there is heightened security around and one hopes and prays that it is an isolated incident. At this stage, I don’t think you need to change your plans. ”

We didn’t change our plans and arrived at the Ben Gurion airport on a beautiful day in April.    In the next two weeks, we saw much of Israel and in particular, Jerusalem, but few crowds of tourists.  Never did we feel in danger.   If we hadn’t occasionally read the the Jerusalem Post, we would not have been aware that a Gazan missile had killed a child in a school bus.  Nor would we have known that Israel had inaugurated the use of a portable anti-missile machine used to knock down the missiles from Gaza before they landed.  Life simply went on in Israel.  We even had some Israelis confess they didn’t listen to the news at all because it wouldn’t change how they lived their lives and only made them anxious. 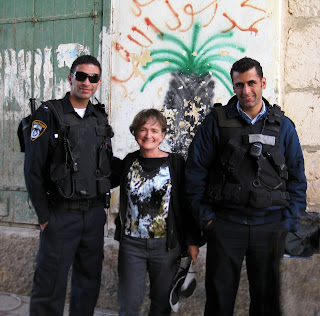 Israel is careful.  The country was on high alert for the Easter and Passover holidays.  Threats had been made of planned  kidnaping.  Security was particularly high in Jerusalem.  This meant a pumped-up armed army presence at holy sites, entrances, and bus stations.  Yet the soldiers still posed for pictures with the tourists. I watched one army unit casually eat at a snack bar near a major archeological site.  And on a Saturday night of R&R, a group of uniformed women enlistees walked down the street singing and carrying their fashionable purses. 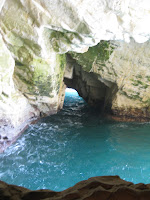 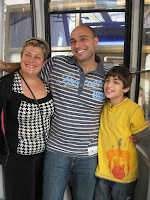 This determination to continue normal life was most evident one late afternoon.  We had visited the old city of Acre, filled with Crusader churches, views of the Mediterranean  and a living Arab presence.  Fifteen minutes away was the Lebanese  border where a tourist attraction beckoned.   A cable car carried visitors down to the sea to view the beautiful grottos formed at the base of the cliff.  Upon arrival, we spotted Israeli soldiers atop the cliff keeping watch over Israel and Lebanon.  The road literally ended at the cable car parking lot.  Below were farms, homes, and the grotto. We visited with an Israeli family who lived down the road and was just out for the evening. Yet, I had read recently that Hezbollah was accumulating rockets just inside Lebanon to use against Israel, literally a stones throw away.  This fact made little difference on that Saturday outing.  Life went on and so did we. 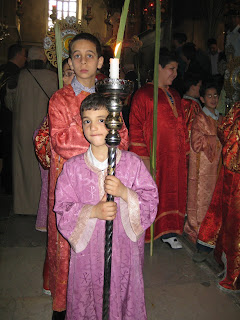 The turmoil in the Middle East does worry Israelis and hurts business.  Some see it as a good time to solve the long-standing conflict with the Palestinians who are also affected by the drop-off in tourism.  When we visited the Palestinian West Bank city of Bethlehem, we had to take a taxi on the Jerusalem side to the security wall that now separates the two cities.  After clearing security,  a Palestinian taxi driver drove us to the Church of the Nativity.  On a Palm Sunday, when thousands of pilgrims should be gathered outside the church, we walked in the door without waiting.  The slowdown in tourism in the Palestinian areas is attributable to the concern about the Middle East and a hesitancy by visitors to cross the security wall.  Yet the Palestinian police are trained by us!  We were treated well, never felt in danger and wished we could have stayed longer.

Humans have a hard time ignoring sensational news.  One death from a missile in southern Israel is far more intimidating than many deaths from drug related fights in south Los Angeles. Our emotions want to ignore the numbers that prove Israel and the West Bank are as safe as the United States to visit.  Could the Middle East erupt in a war while you visit?  Of course, but what are the chances, really?  The wonderful travel writer, Paul Thereoux, recently wrote a piece in the New York Times called “Why We Travel” .  He has found that in almost every case, the “know-it-all, stay-at-home finger wagger’s” advice  not go to a distant place has been bad advice.  I returned from Israel with a greater understanding of my Christian heritage, the Jewish/Palestinian conflict,  the geography of the Holy Land, and a love of pomegranates.  And, I found one thing  Israelis and Palestinians can agree on- they want the tourists to visit.

One Response to “Israel – Tourists Welcome as Life Goes On”