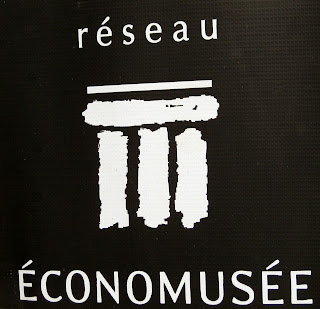 “We protect the know-how”, our guide explained.  This summed up the goal of Quebec’s  Economuseum system. Begun in 1992, this network safeguards knowledge of ancient trades such as blacksmith forging, bread baking, cheese making, and apple cider production. Today,  51 handicraft and agri-food trade businesses promote the crafts by opening up their work-in-progress to public view and selling the finished  products. Families can easily combine vacation and education by exploring these examples of life in the past.

Most are in Quebec province.  To be a member, the artisan must use traditional methods but be open to new and creative uses of the craft.   Those who qualify proudly display the “Economusee” designation on their signs – in French, of course. 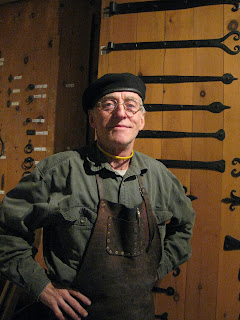 The economuseums vary greatly in size and offerings. Many charge for an informative tour and demonstration.   On the lovely Ile d’Orleans, near Quebec City, La Forge a Pique-Assaut is a blacksmith shop open for touring and viewing.  Using the same techniques that originally produced tools, horseshoes, and machines, Guy Bell and his assistant now create an array of beautiful wrought iron work for the home – furnishings, stair railings, and decorative pieces.

On the opposite side of the island, a wonderful Creme de Cassis is produced by the Monna family using local black currants.  The liqueur is mixed with white wine or champagne for the traditional French Kir apertif.  Recipes are provided to allow experimentation, including a Cassis Margarita – a new and creative use of an old craft. 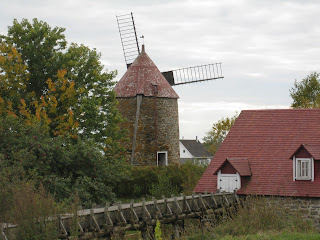 Down the road in Charlevoix,  artistic heart of Quebec Province, papermakers at Papeterie Saint-Gilles stay busy dipping, pressing, separating, and drying sheets of cotton paper for elegant stationery.  Across the St. Lawrence River, at Les Moulins de L’isle Aux-Coudres, wheat is ground by a watermill fed by an old-fashioned mill pond.  We learned the success of this operation depended on a perfectly set and scraped 2,000 pound grindstone as well as the right direction and amount of wind.  If all is lined up properly, 450 pounds of flour can be ground in one hour.  Children will enjoy exploring the grounds of the mill.    Flour and breads are available for purchase. 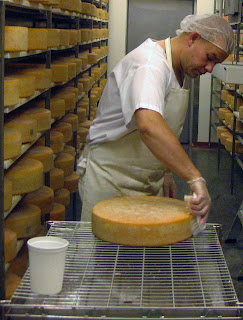 The largest Economusee we visited was the Laterie Charlevoix where dairy products have been produced since 1948 by the Labbe family.  Traditional and experimental cheeses are now the emphasis.  All stages of cheesemaking are on view with a tour as well as a sampling of the products. The cheddar curds are used in ‘potin’, a Quebecan concoction of  french fries topped with cheddar curds and gravy.  With great names such as  L’Hercule de Charlevoix, their cheeses are sold onsite and sell out everyday.

A “traditional”  museum on the grounds gives a fine history of milk production and its delivery system.  The collection of 600 different  milk bottles is small by American standards but still impressive. On a busy summer day, 2000 tourists will visit the Laterie, including many families.

We were only able to sample a few of the economuseums but it was enough to appreciate the effort being made to protect ancient arts and trades.  Blacksmith shops, cheese creameries and paper mills are now inter-active museums as well as studios for production of traditional trades.    The result has been good for creativity, protection of ancient crafts, education of students, and for family tourism.

Maybe Northeast Texas could explore this new idea of what a museum should look like.  We have dairies, blacksmiths, winemakers, coffee roasters, quiltmakers, and other ancient trades still being practiced here.  It would be a great regional project and families would appreciate the opportunity to have fun while learning a thing or two.