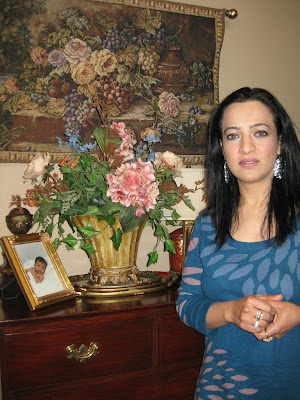 “I do the thinking part” is how Ayesha Shafiq describes her duties at her husband’s medical clinic in Paris.  The truth is, Ayesha has always done the thinking part.  She grew up in Peshawar, in the North-West Frontier Province of Pakistan – an area that is best known through the experiences of Greg Mortenson in “Three Cups of Tea”.   She comes from a prominent family that owns M. Hayat & Bros. Ltd., a furniture manufacturing company established in 1870, that lists the Queen of England as a customer.  Besides serving as Chief Secretary of the North-West Frontier Province, her father, Khalid Aziz, is well respected in the Federally Administered Tribal Areas (FATA) of Pakistan.  Americans have become quite familiar with FATA as some Taliban currently hide there.  Pakistan does not have control over FATA even though it is within the borders.  Personal relationships govern this area, not laws.   Because Mr. Aziz is trusted by the tribes in FATA, he is able to get information to and from the tribes as well as the governments of Pakistan and the United States.

Ayesha studied International Relations and wrote for the local paper, The Frontier Post.   In 1999,  her father was arrested and falsely accused by members of then President Musharraf’s government of misconduct in the accountability bureau that he supervised.  Their family home had been the center of many visits by foreign dignitaries.  Ayesha met Princess Diana, answered the phone when the Prime Minister of Ireland called to leave a message, and knew all members of the Bhutto family of Pakistan.  These experiences gave her courage to speak out about her father’s detention.  She wrote an open letter that was published in a Karachi newspaper about her father’s arrest and poor treatment in jail.  The editor of the paper called her one brave girl to speak up.  It would be another three years before her father was released in 2003 but his treatment did improve and he was allowed to attend her wedding. After a four year trial, Mr. Aziz was fully acquitted of all charges in 2006.

Ayesha met her cardiologist husband, Khalid Shafiq, through family members.  He traveled to Pakistan to marry her in 2000. After the wedding, they boarded a plane to begin the 36  hour journey to the United States.  Upon arriving at DFW, her husband drove the final 100 miles to Paris, Texas providing the first view of this country.

Ayesha had to learn to drive. In Pakistan, the driving is hectic with no road signs and all understand this saying – “Every man for himself and God for the rest of us”. PJC said she was too old to take lessons there so Johnny Crawford taught her.  For three years, she wouldn’t drive her new car because she was afraid of “bumping” it.

Khalid Shafiq’s dream of having his own clinic began to take shape in Paris and Ayesha was needed to help run it.  She enrolled at PJC to take some Billing and Coding classes.  She remembers hiding around the corner to learn how students got food and drink from vending machines.  When her grades arrived, she was not sure what she had scored.  But her husband explained that a 4.0 was the best grade, not a bad one.  Ayesha now supervises the 22 employees at the clinic. 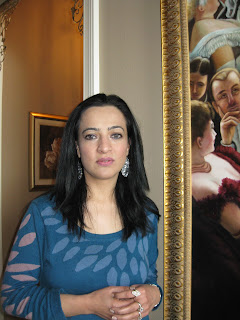 In 2006, the former President of Pakistan, General Pervez Musharraf,  visited Paris to consult with his local cardiologist, Dr. Arjmand Hashmi. Elaborate plans were made among the various levels of law enforcement to safely escort Musharraf here. Dr. Hashmi and Khalid Shafiq are colleagues and share a homeland.  Khalid and Ayesha offered to entertain President Musharraf at their home.  It would be one of the more amazing “small world” experiences.  Ayesha opened her home in Paris, Texas to the former leader of her country whose government was responsible for the imprisonment of her father.  No mention was made of the shared history but pictures in their home of her father’s plight were obvious.  All was cordial and Musharraf and his wife were quite gracious and appreciative of the hospitality.

Even when she was young, Ayesha believed in America.  She liked our way of thinking. According to her, we’re honest and open in how we feel.  After living here for 10 years, her only negative observation is that Americans take all that they have and can have for granted.  If something doesn’t work, we dispose of it.  To survive in Pakistan, one must make things work.  You can’t walk away from a job, a car, your family.  But this is her home now and she has adopted its rhythm.  Her husband and children, Sayek and Layla, are busy and involved in the Paris community.  Thanks to this supportive family, Ayesha awakes every morning with “the spark, energy and zeal” to conquer the world.  Ayesha’s journey to Paris was longer than most but she and her family are happy to be here.

One Response to “The Journey from Pakistan to Paris, Texas”