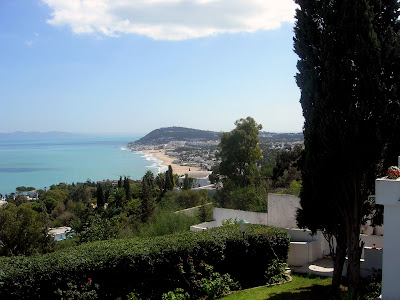 Three years ago, my husband and I visited my cousin who lives in Tunisia.  We were enchanted by this Mediterranean country with beautiful beaches and well-preserved Roman ruins.  Europeans had long discovered the country’s temperate climate and flocked there in droves.  But today as I write, Tunisia is in the midst of a revolution and all are holding their collective breath. 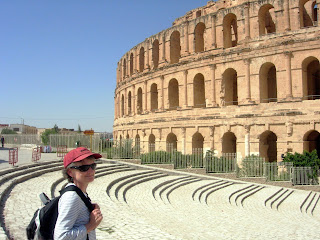 Before going to visit, I read “Tunisia, A Journey Through A Country That Works” by Georgie Anne Geyer, an author that was impressed with the progress this small country had made as a moderate in the Arab world.. After the French left in 1957, Habib Bourghiba became president of the new democracy.  He had strong feelings about moving toward modernity – a kind of Tunisian Ataturk.   Almost immediately, he banned polygamy, introduced judicial divorce for women as well as men, set a minimum age for marriage, gave women the right to vote and run for office, and made education free and compulsory for both sexes.  Thirty percent of the budget was allocated to education.  From this dedication, a large middle class emerged, with many college graduates.  But there was no challenge allowed against  Bourghiba who declared himself president for life in 1974.

In 1984, Tunisia erupted after a drought caused the cost of bread to rise 115% overnight.  The government had too strong a hold on the economy and not enough jobs were being generated for the educated young Muslims.  Islamists were plotting to overthrow the government.  In 1987, Zine El Abidine Ben Ali, Minister of the Interior, obtained a doctor’s letter saying Bourghiba was no longer capable of running the country, and stepped in as president.  He was able to distinguish moderate from radical Islamists and courted the former.  Participatory democracy still wasn’t permitted but the country did develop a National Pact with commitments from individuals, labor unions, schools, etc.  Tunisia would remain a pluralist society with women being totally emancipated.  Islam was the official religion but freedom of religion was assured..  Free political parties were not allowed immediately but were built into the process.

Since Ben Ali became president, poverty dropped by 80%. The percentage of Tunisians owning homes hit 80% at the turn of the century. Tunisians themselves contributed to a fund to be used for low interest loans to start small businesses.  By cultivating tourism, the country could offer low budget/high value trips for Europeans to the beaches of Tunisia – the equivalent to America’s relationship with Cancun and the Mayan Riviera.  Tunisia partnered up with France on commerce and military protection.  All appeared from the outside to be good.  But the drop in the world economy exposed cracks in the system.

President Ben Ali never followed through with the plan to allow free political parties and elections.  His family became unseemly wealthy whose wealth was flaunted.  My cousin tells of headline news about the president’s wife opening a Jaguar car dealership!   His son is considered a billionaire.  Freedom of the press was stifled.  Even as the riots started over a month ago, Tunisian television continued to broadcast only the stale programs as usual.  News of the happenings had to be obtained through the internet, twitter, etc.  Over the years, the police became feared as the arm used to suppress opposition and free speech.  As Georgie Ann Geyers now says, “Ben Ali stayed too long.”

Tunisia’s unemployment stands over all at 14% but even higher for the young and college-educated with all of the frustration associated with such  high numbers.  As you probably have read, the final straw came when a young man with a university degree couldn’t get a job and was forced to buy fruits and vegetables to sell from a stand.  The police ‘raided’ his stand because he didn’t have the right papers and took all of his produce.  Depressed, the young man set himself on fire and died.  The lack of jobs is keenly felt here and in other Arab nations.  Ironically, Ben Ali himself said years ago that the greatest challenge to his government and the Arab world was the paucity of jobs for the educated population.  Last week, that problem revisited Tunisia and the government fell again.

It’s a very dicey situation today.  Old and new leaders are struggling to form an interim government that can be maintained until elections are held.  The army, whom the Tunisians trust, is working to keep the peace.   Food is scarce.  A trip out on Monday yielded my cousin’s husband some apples and oranges.  They’ve had to clean out the pantry and freezer. 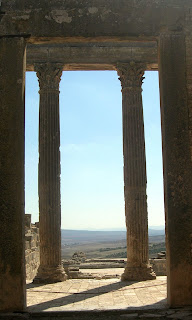 This is not Egypt nor Saudi Arabia.  Tunisia is filled with educated, middle-class citizens. But the people are demanding the civil rights that Americans have long enjoyed – free political parties and fair elections, freedom of the speech and press.  These are not radical Islamists and we should hope they’re successful in their quest for greater freedom.  Let us also hope when the economy is opened up, jobs will develop, and Tunisia can again show the way to the Arab world.

One Response to “Tunisia – A Country That Could Work Again”