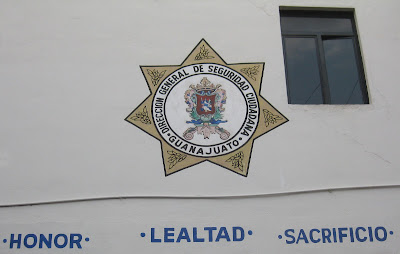 I have hesitated to write this story about an attempted theft in Mexico.  The last thing I want to do is discourage tourists from going to Mexico.  Most of that country is as safe as ours with the notable exception of northern Mexico.  But the story is really about the response to the crime, not the crime itself.

I was traveling in Guanajuato, Mexico with my friends, Tina Smith and Betty Swasko, as well as Tina’s sister, Lisa Pavel.  This 450 year old world heritage site boasts a great university, colorful homes, and old silver money.  We had just exited a silver jewelry store onto Avenida Juarez when  I heard shouting and sounds of a struggle behind me.  I turned to see Lisa and Tina holding on to Lisa’s purse as a hooded man tried to pull it away.  After several seconds, he gave up and ran down a nearby ramp to the street below.  When he released his hold on the purse, Lisa fell back and hit her head against the jewelry store’s wall, injuring her head. 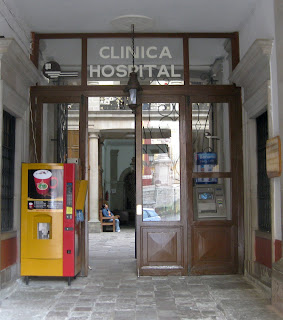 All around us people stopped to offer help.  A policeman quickly appeared and ran after the thief.  Betty crossed to a store to get tissue for the bleeding. Several bystanders shook their heads and expressed their condolences.   And a young woman offered to walk us to the closest clinic.  In a daze, we followed her for two blocks to Clinica Hospital where a receptionist quickly placed Lisa in an exam room.

As we were filling out the forms, three policemen and a television cameraman arrived in the courtyard.  I guess we weren’t hard to find.  A policeman had caught the robber and they wanted us to come to the police station to identify him.  The cameraman filmed all of the conversation but I don’t know if it was shown on the news that night or not.  The officers agreed to wait.

Lisa’s physician was capable, sympathetic and did the appropriate exam for a head injury.  She needed several stitches which were quickly done.  We were all impressed with Lisa’s toughness and inner fortitude.  Thanks to her long held belief in alternative medicine, she had taken Arnica pills for the pain and cream for her bruises.  Both appeared to work very well. 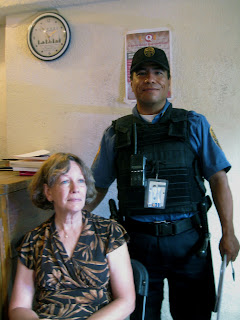 As we walked out of the clinic, there was one police car and an extra car to take us to the police station.  Lights flashed as we made our way through traffic.  At the station, Lisa and Tina were shown a picture of the alleged thief as well as his hooded jacket.  They recognized both immediately.  We got to meet our hero, Victor, who had caught the man.  He was very familiar with this criminal who was known to have mental problems.

All seemed in order until they advised Lisa and Tina that they would have to return in several months to testify against the man. That was, obviously, not going to happen.   So I went into my attorney mode and questioned why they couldn’t set up a hearing the next week while we were still there.  The man had confessed.   They had eye-witnesses.  Appoint him an attorney and get it moving.  When they realized I was an attorney, all laughed at the head officer and he shook his head.  But I still couldn’t make the hearing happen. 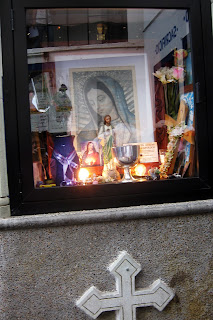 Lisa needed to fill a prescription and get a tetanus shot.  We didn’t know where to go and didn’t have transportation.  The main officer offered a police car escort.  Since it was raining, they backed the officer’s car into the courtyard to get as close as possible to us.  We walked past the station’s  Shrine to the Virgin Mary as we climbed in and with lights flashing,  headed to the Red Cross clinic.. That clinic had no tetanus vaccine.  The trip to a second clinic was successful even though we were joined by a throng of pregnant women.  With lights still flashing, we pulled in front of a pharmacy and had the prescription filled while the officer waited.  The last stop was our apartment.

The experience feeds the stereotypical fear of both traveling and traveling in Mexico.  But I’ve had far worse criminal experiences in the United States.  And the response by the crowd, the clinic, and the police was universally sympathetic and solicitous.  They all hated that this had happened to a tourist in their lovely town which is known to have a low crime rate.  It didn’t slow down our visit as we continued with our itinerary to San Miguel de Allende the next day.  And we all agreed that we would return to Guanajuato –  in a heartbeat.