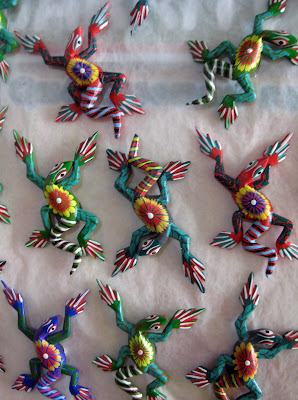 Oaxaca, Mexico has long fascinated Barbara Fendley and many others from Paris.  Its arts and crafts draw in the artistic crowd, a heavy indigenous presence attracts sociology and history majors, while archeological aficionados drool over the nearby Mitla and Monte Alban ruins. On a more personal level, one of its Rotary Clubs is a sister club to our Monday Greater Paris Rotary Club. 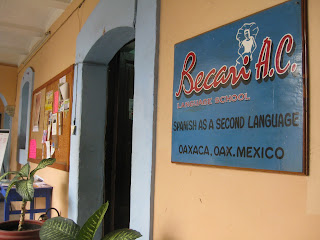 Several years ago, Barbara decided to learn Spanish there and soak in the culture at the same time.  She chose Becari Language School  (http://www.becari.com.mx/) for her lessons.   At first she stayed with a local family but now rents her own apartment for two months every summer. Toni Clem and I decided to pay our friend a visit.

Barbara’s most recent apartment on Tinoco y Palacios street sits next to a funeral home whose owner has befriended her.  He easily greets Paris visitors while supervising his supply of caskets on display for passing residents.  His dog knows that Barbara is good for a doggie treat every day.

After spending so much time in Oaxaca each year, Barbara is aware that the church bells ring at 6:45 a.m, the high fog horn comes from the Gas de Oaxaca truck, and that a man calls out every morning selling water.  She knows the hours of restaurants, names of waiters, best prices for handicrafts and souvenirs, where to find quality goods, days that museums close, and who makes the best coffee.   This is all very valuable information.  As guests, our only job was to pick among her daily suggestions and follow. 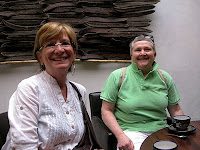 We began with a cooking lesson at Casa Crespo (http://www.casacrespo.com/)  where we sipped coffee around a circular table and discussed the menu.  Oaxaca is known for its subtle and eclectic moles and sauces.   Our chef, Oscar Carissosa, casually threw out suggestions for dishes with complex flavors and an occasional unfamiliar ingredient.  After deciding on the four courses, Oscar grabbed a shopping bag and we quickly moved outside for the short journey to the Pascua market.  Efficiently and expertly, he led us through a colorful maze of fruits and vegetables,  stopping occasionally to explain a new fruit or herb.  Honey bees hovered over the sweet blocks of candy and ants kept the salt dry.

Back at the restaurant, the cooking began.  We moved between the chopping table and kitchen and used blenders, fine knives, and a tortilla press.  Squash blossoms were rolled in a flour tortilla, pineapple, pork, and raisins stuffed into poblano chiles,  and flan whipped and poured into a pressure cooker. Oscar carried all of the recipes in his head  although he sent us the formulas by e-mail.   Lunch was served in courses and we ate for two hours. 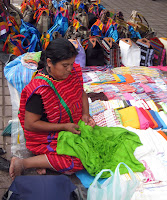 Throughout the rest of the week,  Barbara led us easily through the streets of Oaxaca which has a known split personality.  One part is dedicated to the large and profitable tourist industry. The crafts are still the best in the country. Since my last visit there 15 years ago, many of the streets and sidewalks have been repaved and  the numbers and sophistication of restaurants have exploded as have the indoor and outdoor markets.  Barbara introduced us to Casa Oaxaca (http://www.casaoaxaca.com.mx/) where a Houston trained Oaxacan chef created dishes such as duck tacos and a red snapper with lemon butter and capers served over a bed of tomato marmalade – the best dish I had there. 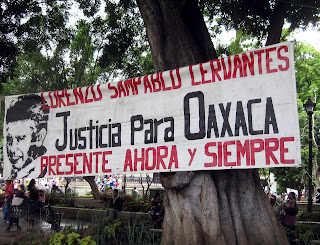 Oaxaca’s second face is political.  The large, indigenous population  found its voice many years ago and has demanded equal treatment.  A strong teachers union holds annual massive strikes,  sometimes with large demonstrations.  The strike of 2006 caused the number of tourists  to plummet and Oaxaca is just now recovering its previous numbers.  This dichotomy is best represented at the Zocalo, Oaxaca’s central square.  While we were seated at one of the many outdoor restaurants, vendors pleaded with us to buy painted book marks, woven scarves, or handmade backpacks. Across the street, a large painted sign hung between two trees demanding “Justicia para Oaxaca – ahora y siempre” – Justice for Oaxaca, now and forever.  The two worlds of tourism and political activism slow dance together,  trying not to trip the other up. (I hasten to add that we never felt in any danger during our visit.) 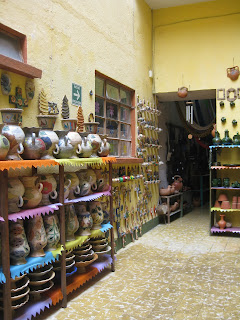 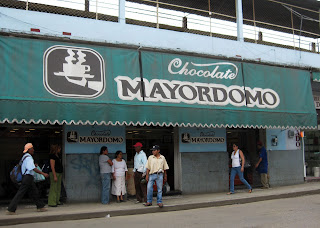 We also explored the markets of Benito Juarez, Mercado 20 de Noviembre, and Artesans de Oaxaca.  Mujeres Artesanas ,(http://maroaxaca.blogspot.com/), a co-op store with a quality selection of artistic goods from all over Oaxaca, rated a second stop.  We bought movie CDs at one street fair and bilingual books at another.  With a chocoholic husband, I had to purchase blocks of chocolate from one of the many chocolate stores on Mina street.  For a traveler who prides herself on minimal purchases,  I found the beautiful and magical artistic world of Oaxaca irresistible and returned to Paris with many recuerdos de Mexico.

Oaxaca is an enchanting city made even more accessible by Barbara’s familiarity with its offerings.  It is far removed from the violence of northern Mexico and deserves a greater following from Americans.  We were lucky to have our own personal guide but even more fortunate to explore this world heritage site.