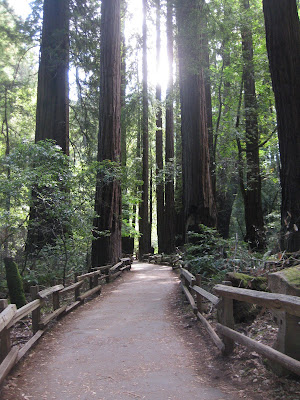 The tall, svelte redwood trees were once common throughout California’s valleys.  Because of unchecked logging, most stands disappeared. Less than five percent of the original two million acres of virgin forest remains today.  But thanks to their difficult location, the redwoods in the Muir Woods National Monument area were spared.  The trees are now also protected by Theodore Roosevelt’s proclamation making the area a national monument in 1908.

Having seen outings to the Muir Woods from San Francisco for years, my husband and I were finally paying our first visit.  The drive was through the densely populated bay area with no glimpse of what lay ahead.  Developments stopped as we passed through Mt. Tamalpais State Park.  But  it wasn’t until the turn-off from Highway 1 that the traffic and noise began to disappear.  Soon cell phone service stopped.   A steep, curvaceous road descended and placed us in the wonderland of coastal redwood trees – a world near the Pacific ocean but far away from the urban scene above.

The Muir Woods National Monument is on 295 acres donated by Congressman William Kent and his wife, Elizabeth Thacher Kent, who insisted that the monument be named after the conservationist, John Muir. Muir was a wanderer who studied at his own “university of the wilderness” and concluded that all living things had inherent value and deserved to live. He would be proud of the Sierra Club and the Nature Conservancy efforts today. 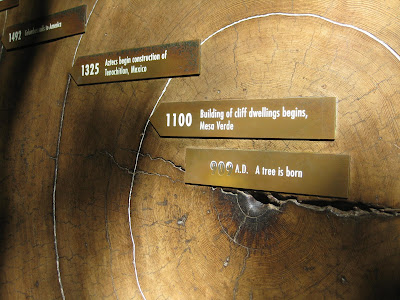 Inside the monument area,  a two mile paved trail is the most popular although there are many more trails through the woods and over the hills.  Because it is an old growth forest, the trees are……… well, they’re old.  Most are 500 to 800 years old with the eldest having seen 1100 winters.  The park uses one fallen tree’s trunk to tag various human activities on  the tree rings.  It had lived over 1,000 years from 909 A.D. to 1930.  Columbus’ landing in 1492 happened two-thirds through that tree’s life.

A very clever park guide helped us appreciate the significance of the world’s tallest living organism.  Here is what we can learn from the redwoods.

1.  “Stand Tall and Proud” – The tallest redwood in the Muir Woods is over 250 feet tall but at other locations they can top out at 375 feet.  Compare this to the tallest trees in Texas such as the 133 foot Bitternut Hickory or the 140 foot Nuttall Oak.  Or better yet, compare with the smallest tree in the world  – the dwarf willow at three inches!

2.  “Live in a Cool Place” – The redwoods live in a narrow area along the coast of California.  They don’t like heat, do like fog and would never survive in Texas.

3.  “Drink Lots of Water” – They require 200 to 500 gallons of water a day –  three to seven times more than the average daily water use for Americans of 69 gallons.  The trees would be pretty thirsty in the dry summer were it not for the fog that carries moisture to the trees’ needles. Redwood creek also helps hydrate the trees.

4.  “Support Members of Your Community” – The trees do this through their root system which is only six to eight feet deep.  That sounds sufficient but it is the equivalent of a 5 foot 4 inch woman having a toe in the ground.  Since the roots are shallow, they have to spread 50 to 100 feet to provide enough ballast for the trees to remain upright and survive the winds.  Obviously, the roots will overlap and support the trees above.

5.  “Grow a Thick Skin” – Their bark is up to 12 inches thick which protects the tree from the elements.  The same tannic acid found in coffee, tea, and red wine makes the tree resistant to fire and insects.  With no susceptibility to disease, the number one “natural” killer is the wind.

6.  “Surround Yourself With Family” – A redwood cone is only the size of an olive.  Since only one in ten thousand cones grow into trees, the redwoods needed some help with fertility.  Nature provided it through burls, a dormant sprout that can be above or below ground.  The underground burls can sprout into new trees, forming a family circle.

Gratefully, the virgin redwood forests are protected.  But ninety-five percent of the redwood forests today have been cut at least once.  Only 21 percent of that acreage is owned by California and the federal government with the rest in private or corporate hands.   The challenge has been how to encourage the second-growth forest to minimize erosion, maintain wildlife and yet maximize timber production.  In the October, 2009 edition of National Geographic, Jim Able, a former industrial forester for Louisiana Pacific, describes his plan of culling the weakest and most poorly formed trees, leaving the strongest to thrive.  Some day, those saved trees will pay back the owners with huge harvests. 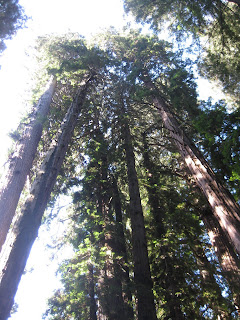 It was hard to look straight up at the Redwoods.  Our necks weren’t used to stretching that far.  But in the Cathedral Grove at Muir Woods, where trees circle around, it was enough to just sit and know they were with us and had been saved for our viewing.  As much as I hate to admit it, California wins the tall tree round.

One Response to “Lessons of the California Redwoods in Muir Woods”