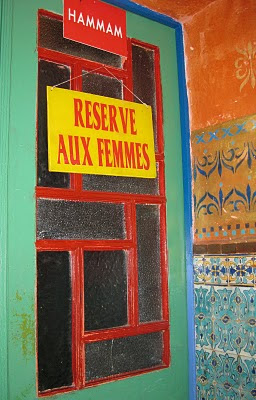 Modeled after the Greek and Roman baths, the Hammam is a form of steam bath and means the spreader of warmth. The Ottomans sowed this Turkish variation throughout Europe. They often are associated with mosques as the baths comply with Islamic laws of purification and hygiene. It was no surprise then to learn of a Hammam at the oldest mosque in Paris, France – the Mosque de Paris. Betty Swasko, Tina Smith, and I were ready for the adventure. 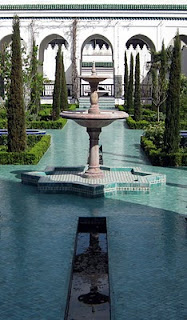 Finding the baths was the first challenge. At the address given, a North African restaurant overflowed into a lovely garden. A waiter pointed us toward the mosque around the block. There, a garden and cool fountain welcomed us but no baths. An elderly man redirected us back to the restaurant. Finally, inside the restaurant, behind the pastry counter, were two green and red painted doors with a sign above one stating “Hammam” and a reversible placard that said “reserve aux femmes” or women only on that day. Cautiously, we entered.

After passing though a tiled antechamber, we arrived at the register with a cashier who acted as if she had never heard a word of English in her life. Gratefully, a departing customer helped with the options and suggested a 20 minute massage for 25 Euros and a 15 Euro trip through the baths. We placed our names on the massage list and slipped on some green, plastic sandals, a far cry from the traditional wooded clogs or patens, carved and decorated with silver and mother of pearl.

There were no signs in English, or French for that matter, except a recurring one that warned us to rinse before entering the baths. Blindly, we found our way to the locker room and changed into bathing suits. After first opening the door to a utility closet, we finally discovered the shower room where an employee used hand motions to be sure all rinsed before entering the baths.

Turkish Baths are very moist and gradually heat your body by increasing the temperature in each of the three rooms. The final room can be as hot as 140 degrees. A Tas, or bucket of cool water, is provided to cool your body and a return trip to the showers is recommended before advancing to a hotter room.

Women of all sizes, shapes, nationalities, and degrees of modesty casually moved about the rooms. We bypassed the first area as the benches were full. A steam sauna sat in the middle of the second room with two elevated platforms on either side. No benches were provided but other participants were lying on the floor of the platforms with their legs resting on the wall. It felt odd but that’s what we did. We learned the reason for lying on the floor in the next room.

The third room was significantly hotter. If we stood, steam swirled around our heads. To breathe, we had to lie prone on the marble floor. Across the aisle, a few women sat in a circular pool that was too hot for us. We were quickly ready for another shower. By the third visit to the shower room, the employee had softened a bit and actually smiled at us. 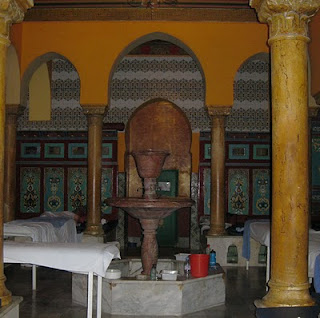 It was time for our massages and we returned to the vaulted , carved entry area where four massage tables stood, guarded by old masseuses wearing the traditional hijab covering their heads. They motioned us to the tables and we climbed up. What followed was not really a massage – more of an oil rub over all parts of the body. After the heat of the baths, the almond scented oil was the perfect antidote. However, my masseuse had a distracting hangnail and Tina’s lady only worked on her shoulders and back as she talked throughout the massage and even answered her cell phone.

No one had mentioned towels but after the massage, we were dry enough to change clothes. Upon leaving, we encountered a single American woman entering the baths looking as confused as we had earlier. It was nice to return the favor and help her with the options and the process.

In a Turkish travel site, the hammam was described as “wafting steam through which daily worries and concerns cannot penetrate.” Now that we know the routine, this description would be accurate, especially on a vacation.

One Response to “Experiencing the Hammam or Turkish Baths, at the Paris Mosque”