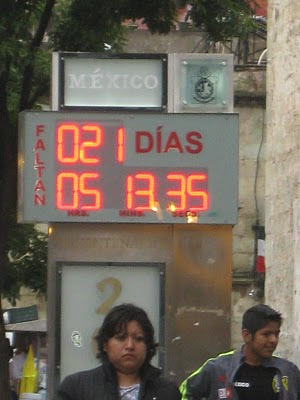 On a recent trip to Oaxaca in the far south of Mexico, I saw a countdown clock. On that day it was 21 days, five hours, 13 minutes and 35 seconds until September 16, 2010 – the 200th anniversary of Mexico’s Independence Day. A second celebration will take place on November 20th as the 100th anniversary of the Mexican Revolution. President Calderon declared 2010 as the “Ano de la Patria” or “Year of the Fatherland” for Mexico. Countdown clocks are in each state capital. I needed a quick review of Mexican history to understand the two celebrations and our neighbor’s roller coaster ride to the modern era.
In 1810, Father Manuel Hidalgo called for Independence from Spain in a shout out from his church in Dolores which is referred to throughout Mexico as “El Grito de Dolores”. After initially fighting each other, a strange alliance of Mestizos (mixed blood) and Indigenous people with the Creoles and other Mexican ex-royalists finally prevailed. The fighting was not pretty with rebel heads being hung on the outside of a granery in Guanajuato. It took 11 years to get to a “constitutional monarchy” in which General Iturbide became the First Constitutional Emperor. He didn’t last long and was deposed by our very own Santa Anna. In 1824, a constitution modeled after that of the United States was adopted.
Throughout the next 80 years, Mexico was a punching bag – constantly harassed and invaded. From 1846-1848, four American campaigns entered Mexican soil which included the occupation of Mexico City in 1847. This resulted in the Treaty of Guadalupe Hidalgo that gave Texas, California and New Mexico to the U.S. for $15 million. When Benito Juarez suspended interest payments on loans to foreign countries (except those of the U.S.), France took the lead among the European nations and also captured Mexico City in 1861, placing Archduke Maximilian as second Emperor of Mexico. As French troops started to withdraw, Mexican Republicans moved in and executed Maximilian. Benito Juarez returned to power and governed until his death in 1872.
Porfirio Diaz won his first term as president in 1876 and literally ruled for eight terms. He suspended freedom of the press, dissolved local authorities, and enforced a “pan o palo”, “bread or beating” approach toward his followers. Even though he did bring in money for the country by foreign exploitation of Mexico’s wealth, only the upper crust benefitted.
In 1910, after more than 30 years of this dictatorship, an interesting coalition of Francisco Madero, General Victoriano Huerta, Emiliano Zapato, Pancho Villa and Venustiano Carranza came together to chase Diaz out of the country. This is the second celebration in Mexico on November 20th – the 100th anniversary of what is called the Mexican Revolution. All these men were to die in the next ten years as the new rules were sorted out and a second constitution adopted in 1917. It wasn’t until 1934 that Mexico got its “Honest Abe” in the election of Lazaro Cardenas who gave Mexico a chance to get back on her feet. Cardenas brought back organized labor and instituted land reform. He also did an amazing thing – he stepped down after his official six year term had ended – a tradition that continues to this day.
Mexico’s long lasting political party, PRI, began in 1929. Until 2000, it almost singlehandedly directed politics across Mexico. However, Vicente Fox broke the mode of sitting presidents selecting the next presidential candidate. He was elected in 2000 from the PAN (National Action Party) as was Felipe Calderon in 2010. Today, Mexico is a fully functioning democracy with three viable political parties.
In the evening of September 15th, President Calderon rang a bell, waived the Mexican flag, and shouted out “Viva Mexico” for the 200th time since the original “Grito de Dolores”. He presides over a very different country today. Newsweek recently selected Mexico as the 5th best place to live in the world among large countries. It notes the extensive young workforce, strong educational system, and generous infusion of monies from outside Mexico continue to make this an inviting place to reside. Its biggest PR problem is the perception abroad of a criminal state which prevents tourists and businesses from coming to Mexico. But for now, we should be happy for our neighbor’s dual celebrations. It’s been a hard road to travel.