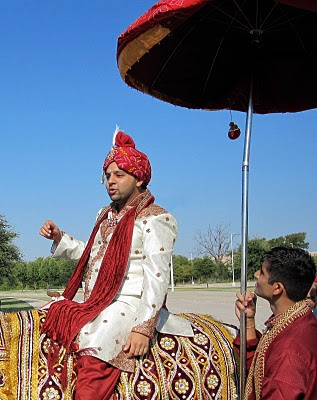 India is a long way from Paris – a minimum of two flights, often more, and 36 hours of traveling. One doesn’t go to India for a week-end. But wouldn’t it be nice to just travel to Dallas and “be there”. We did just that recently at the wedding of our son’s friend, Amit Agarwal.
Amit’s father, Mahesh Agarwal, moved to Paris in 1978 to work as a hospital medical lab tech. He returned to India in 1979 and brought back his happy and outgoing wife, Usha. Both their children, Sonika and Amit, were born at McCuistion hospital and educated in the Paris school district. (Sonika is general manager of La Quinta Inn in Sherman and Amit is a physician.) With the help of a temple in Dallas, the children were raised Hindu but had many Christian friends. It all seemed normal to them.
Amit’s fiancé, Nima Patel, is also a physician but she was born and raised in the Indian community of Garland, Texas. In her childhood, Nima was surrounded by other children whose parents had immigrated to America. As one friend noted, Nima could go to any of her neighbors homes and borrow ghee, a clarified butter used in Indian cookery. It all seemed normal to Nima. 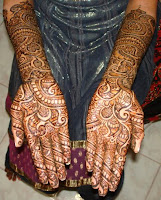 When Amit and Nima married, the wedding festivities recreated the feel of an Indian wedding even though it was held at the special events center in Garland. Unfortunately, we missed the Friday festivities with the traditional line dancing. But we arrived bright and early on Saturday morning, ready for the scheduled 9 a.m. wedding ceremony. No one had told us about Indian Standard Time (IST). It should have been obvious from the small crowd that 9 o’clock was only an approximate time.
The groom, his family and friends approached the center from the hotel across the street. In our Garland setting, the hotel and special events center represented the groom’s and the bride’s homes respectively. Gratefully, an Indian guest advised us that if we were with the groom, we should be walking with his family. We crossed the parking lot and joined the dancing Agarwals.
The group followed a white pick-up that pumped out Indian music as a lone drummer hammered out the beat with gusto. Dressed in a safa, a traditional red turban, and red and gold wedding attire, Amit rode a white horse covered in brocade. He was shaded with a red cloth umbrella held by a follower. Most of the women were dressed in their sparkling saris and the men, including Amit’s Paris friends, wore the traditional kurta pajamas. Because of the continuous dancing, it took the procession an hour to cross the parking lot to the entry of the civic center. 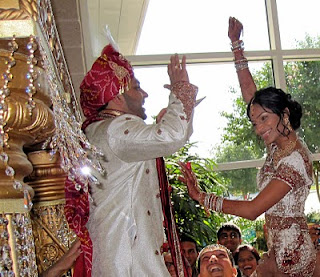 The bride’s family and friends were there to greet us and Nima and Amit were soon lifted high to receive flower garlands. The crowd entered the ceremonial room where a stage held the thrones for the bridal couple and chairs for family members. It was a casual time as we waited and visited with Rashmi Patel, a former resident of Paris. At the correct spiritual moment, the ceremony began with the bride’s ten attendants entering individually, holding a single flower, and wearing identical saris. 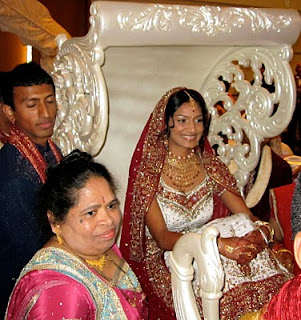 The bride’s maternal uncle (known as the mama) escorted her as she was carried in by family friends on a palki or holy carriage. A Brahmin priest conducted the Hindu Wedding Ceremony in Sanskrit. Few Indians understand this ancient language but all are familiar with the process.
The program guided us as the bride was accepted into the groom’s family and both received blessings of the gods and families. Since the service took some time, pistachio and rose petal ice cream were served to guests around 11 a.m. As the newlyweds received more blessings and gifts, we were directed to the next room for a light, vegetarian meal. We visited with an Indian guest who explained the use of the matchmaker in India whose emphasis is on uniting two families rather than just the couple. Finally, our bride and groom returned to the hotel in a horse drawn carriage where the groom’s family welcomed them with more gifts. 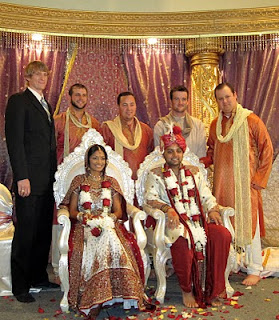 The evening dinner event was much less traditional and had many more attending. At least 600 guests listened to friends of the bride and groom tell stories. (In India, a wedding could have 4,000 guests.) Amit took some gentle kidding about his country accent but there was also admiration for his having experienced a more traditional American childhood in Paris. Nima’s ten attendants were all Indian friends. Amit’s friends were an incredible blend of small town Texas who had accepted him into their fold. I felt proud of our community and its openness to the children of a very different culture. 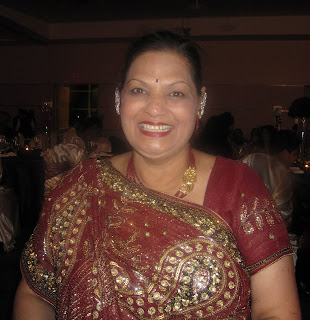 The dancing continued that evening with music from the Punjab region – the favorite in all of India because of its strong beat. (Think Bollywood.) Usha was the star dancer. Thanks to our Paris friends, Chris and Swati Prakesh, we learned to rythmically lift our shoulders while holding our arms in a U shape. Joe and Agnes Xavier also joined the dance floor movements. My shoulders were sore the next day!
I’ve never been to India. But for one special day, I experienced its ambiance, heard its language, ate its food, moved to its beat. And I was reminded again that the joy of a wedding is universal, to be celebrated in whatever form it takes.

One Response to “An Authentic Indian Wedding in Garland,Texas”