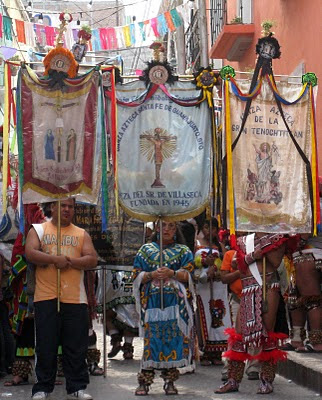 We were happy to be there – a girls trip with Paris friends. We rented a three bedroom house with a rooftop terrace for $500 a week near the central market of Guanajuato, Mexico. The weather was almost perfect with warm days and cool evenings. The city has been designated a World Heritage site because of its lovely colonial architecture dating from when Guanajuato produced one-third of the world’s silver. Thanks to the diversion of most traffic below the city, many plazas, streets, and callejons (paved pathways) were without vehicles – perfect for strolling. 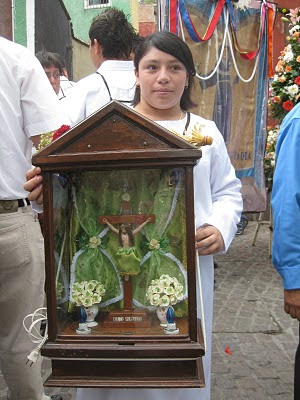 Our itinerary was unexpectedly altered at 6 a.m. on Saturday, June 12th. Loud firecrackers booms are often heard here in the morning to celebrate birthdays. But at this dawn, a volley of explosions saluted the day, followed by the sounds of an advancing band down the small, steep callejon in front of our house. Close behind, religious banners, singers, and contrite parishioners paraded down the mountain, filling the street directly below our balconies.

It was the saint’s day for the near-by San Antonio de Padua chapel. San Antonio is a beloved saint across the continents. Portuguese by birth, he joined the Franciscan monks in Italy where his powers of preaching were recognized by his title “Evangelical Doctor”. Our own San Antonio, Texas was named in his honor and Italy claims him as their patron saint. (As we age, we should call upon him often as he is also the patron saint of lost things.) He died on June 13, 1231, a date that was now being celebrated in our hood in Guanajuato 779 years later. 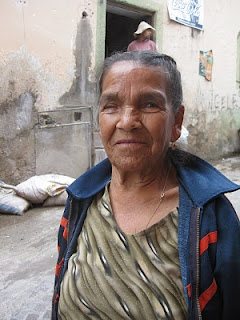 A room on the street had been converted into a small chapel where mass was celebrated over loud speakers. Then the festivities began with large pots of soup and tamales offering free fare to any who asked.
Neighbors gathered and visited. They smiled at us as the only gringos on the street. We danced with an old, tilted woman who smiled sweetly at her four partners. Another lovely woman answered our questions and encouraged us to participate throughout the next two days of celebrations.
After an afternoon siesta, we opened our front door and stepped into a street filled with Chichimeca Indian dancers – replete with feathers, body paint and ankle bands of nuts from the Ayoyote tree. 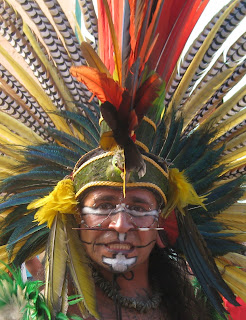 It took our breath away. Guanajuato was originally inhabited by one of the nomadic Chichimeca tribes who maintained a fierce resistance against the Spaniards for longer than most. 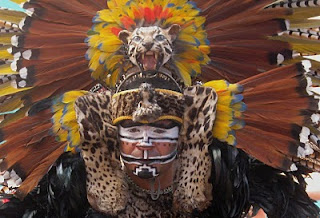 They were primitive, painted their bodies, and ate only game, roots and berries. Most have been assimilated although a sliver of the population (.26%) can still speak the indigenous language. Many of their descendants were joined by other tribes in Mexico to provide authentic dress and dance for San Antonio’s day. 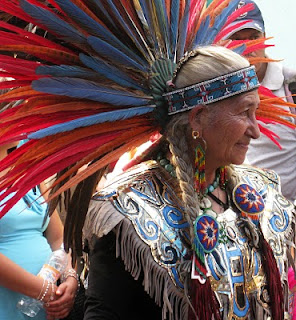 I talked to Rosa Maria Hernandez Maya, a 65 years old Indigenous woman, who had been dancing since she was five. Her father started the dance group in Mexico City and they still travel throughout Mexico for performances. Ironically, we were told the shields used by the dancers were to protect the indigenous people from the religion of the conquerors and a common name for the nuts used in the dancers’ ankle bands is hueseros de friar or friar’s bones. Neither sounded welcoming to the new faith nor the present celebration. 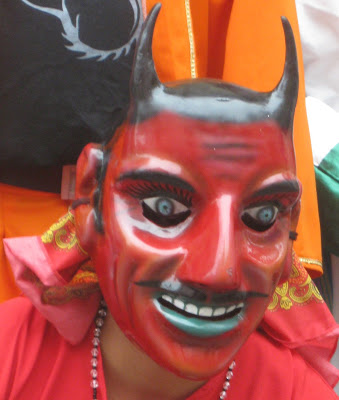 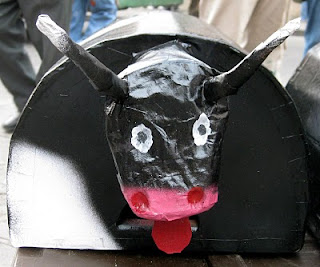 On the opposite end of the street, a popular morality play was being performed. Actors dressed as the devil, young maiden, prostitute, drunk, farmer, cowboy and others battled with a bull character. Children laughed as the bull attacked the drunk or when the cowboy lashed his whip. We were helped with the drama’s meaning by Mariano, a native who currently works in Alabama, but who returns to Guanajuato every year for this festival. He explained that in the end, all characters die except death itself – represented by the devil.

The next morning, the festival was taken out into the streets of Guanajuato with a parade to the Templo de la Compania de Jesus where another mass was to be celebrated. 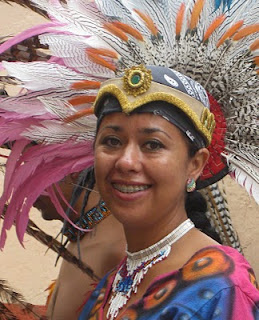 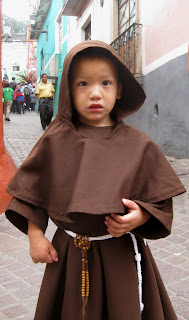 They were joined by a band or two and 12 different drum and bugle corps composed of fathers and young sons. It was all quite colorful and loud.

That afternoon and evening were too crowed for us and we explored other parts of the city. The next morning was blessedly quiet with no awakening booms. Streets were clean and people returned to a normal morning’s work.

No guide books mention this festival and few tourists were present. While not community wide, the celebration was large by neighborhood standards. And for us temporary neighbors, it was a magical festival – one of those unanticipated experiences that travelers dream about – a merging of the past and present, the sacred and savage, the young and old.