Boy, those bees get around. We think only humans travel for work but the honey bees can match many of us mile for mile. And few bee hives travel as far as those owned by the Lamar County business of Johnson’s Bee and Honey.

Randy Johnson has been in the apiary business since 1961 – almost 50 years. He and his son, Chad, are the only employees in an enterprise that makes between 150 to 200 barrels of honey a year. Since a barrel equals 650 pounds, this “small operation” produces over 60 tons of the nectar of the gods. It takes all of their 1500 hives and 75 million bees to accomplish this.

With its own wings, a worker honeybee will daily travel approximately three miles from its hive at a pretty decent speed of 15 miles per hour. Since an individual worker only lives six weeks, she covers about 125 miles creating 1/12 teaspoon of honey in her lifetime. Obviously, many bees are needed to meet the goal of 60 tons of honey.

Enter the queen bee whose sole job is to lay eggs – and not just a few eggs at a time. Her royal highness is expected to produce 1000 to 1500 eggs per day. Now, that’s real multiple births. Mr. Johnson only keeps his queen bees for two years as they, understandably, “get tired”. He buys his queens from a California company that grafts from a good stock. After the queen is purchased, she is shipped UPS overnight from California to Texas where she’s placed in an existing hive. 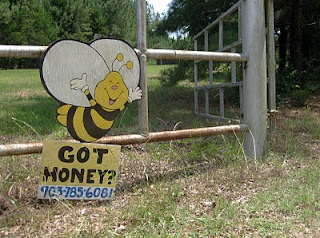 Mr. Johnson’s bees have spring, summer, and winter homes. Bees produce the most honey in the late spring and summer. They use the sugar product to store up food for the winter. But by June, excess honey exists and the harvest begins. In the spring, most of their hives are placed around the Mt. Pleasant and Daingerfield area. Some remain in Lamar County where the hairy vetch, a flowering legume, provides the ingredients for production of white honey. In June, half of the bees are loaded on semi-trucks and sent to South Dakota where they feast on the nectar of yellow clover and alfalfa. Johnson’s beautiful golden honey is a mixture of the South Dakota and East Texas products.

There is a respite for the bees and the Johnsons in late fall. But in January, half of the hives are again loaded on semis and sent to California to pollinate the almond crop. Fifty to sixty semi-loads are needed for the large number of almond orchards and three-fourths of the bees are leased, including the Johnson’s bees. Back they come in March where the hives are again placed around East Texas. 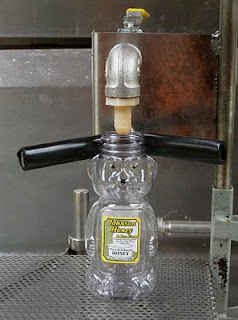 All of Johnson’s honey is processed in Lamar County and placed in containers, ranging from a small bear shaped plastic dispenser to gallons sized for professional use and/or large families. Recently, the business expanded into cream honey – a whipped honey that can be flavored with cinnamon, apple, strawberry, etc. Chad has built the folksy display cabinets that can be seen in many Paris locations and within their 100 mile service area. They also sell heavily to the Save-A-Lot grocery store chain in Oklahoma. 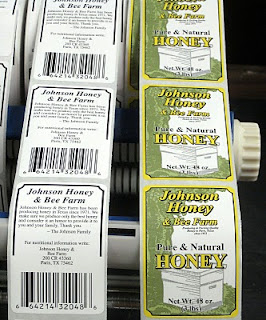 Mr. Johnson is dismissive of the honey sold in most stores as it is not local. Labels for the large national companies confirm that much of the honey sold in the U.S. is from foreign countries with China (of course), Argentina , and Turkey being the largest contributors. I’ve always believed in supporting local bees, especially since they are the only insects that produce a food humans will eat.

The honey industry makes good use of our highways. Within a year , the queen bees cover about 8500 miles. Their chariots are the net covered semis that escort the royalty and her entourage across the Rockies to California and over the Midwest to South Dakota and back again. By traveling so much, they create a wonderful honey that supports our local economy and our health.