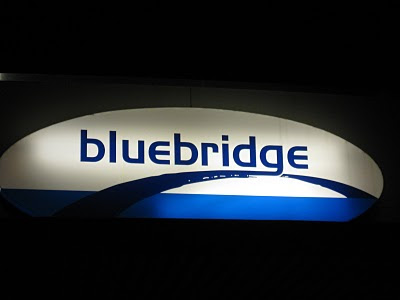 I have long said that the worst travel experiences make the best stories. But there are occasional good travel events that also are fun to relate. One such happening occurred recently on a ferry crossing the Cook Strait from Picton, New Zealand to its capital, Wellington.
We arrived at the terminal of the Blue Bridge Ferry about 45 minutes before the scheduled departure at 7 p.m. The employee at the check-in counter seemed very glad to see us and asked, “didn’t you check your e-mail?” We first feared that the crossing had been cancelled. But she quickly assured us that the correspondence concerned something really exciting. We were the one millionth booking for the ferry and they wanted to celebrate. The Company refunded the cost of our ticket and we were to be their guests for the three and one-half hour crossing.
First, a picture was taken of some of the employees and us to be used in their media. A van carried the two of us to the ship where we were escorted by “Lorna” up the elevator to the café. We were told we could order anything. Both my fish and chips (served with mayonnaise on top of the fish and sweet ketchup for the fries) and my husband’s chicken salad were basic but good. Drivers from the trucks below were already dining and other passengers soon joined us.
Lorna then offered to take us to the bar. We hesitated. It would be nice to relax and have a beer or glass of New Zealand wine but we knew the Cook Strait could be one of the world’s roughest stretches of water. It is the only opening between the North and South Islands and acts as a huge wind tunnel. Ships have been known to sink in the high swells. Lorna laughed. She said we were lucky. The wind was from the north that night which meant smooth sailing. A southerly wind is another story. A week after our crossing, all ferries were shut down because of “wild weather conditions” including a strong southerly air stream.
Reassured, we followed Lorna to the bar/lounge area which was quite comfortable with windows on three sides and an opening onto a large deck. Surmodh, our bartender from India, served the drinks and threw in a free Cadbury chocolate bar. He noted it was a quiet night with only 45 passengers and 30 truck drivers. I saw him dim the lights for some people trying to sleep. A Kiwi truck driver approached us and joined in the conversation. He had driven trucks through Oklahoma, Nebraska and Iowa and wanted to talk about the Obama Health Care bill which had received a lot of press in New Zealand.
After we had sailed through the Marlborough Sound into the strait, Lorna led us to the bridge to meet Captain Donald McCloud, a veteran of sailing in the South Pacific. We passed state rooms for the First Mate, Second Mate, First Engineer, and Second Engineer, before stepping into the darkened bridge. Only the soft lights of the radar and GPS system were on but a full moon lit the sea ahead. One sailor used binoculars to watch for fishing boats without lights. The season for Hoki fish was approaching and more fishermen would be out.
Captain McCloud pointed out the mounds on the radar which outlined the North Island and explained that their GPS system benefitted from the same satellite as the one used in cars. An engineer below was running the boat although they could do it all from the bridge, if needed. To our left were cables, 300 meters under water, that carried electricity between islands. And in answer to our questions about a rough sea, he said they would stop passenger ships at four meter swells (12 feet) but he had been on ships in 14 meter (42 feet) swells. Yikes.
At the end of our visit to the bridge, Captain McCloud gave us a dark blue Bluebridge travel bag filled with Bluebridge memorabilia. We are now the proud owners of two Bluebridge t-shirts, two Bluebridge hats, two Bluebridge tea towels and water bottles, and Bluebridge playing cards and chapstick.
Bluebridge is owned by Strait Shipping that has provided freight shipping for years. But the passenger ferries only began service in 2003. Their competitor is the Interislander ship line. When I asked Lorna what distinguished Bluebridge from the Interislander, she quickly replied “good, friendly customer service”. It’s hard for me to judge that comment as few customers get free fare, meals, drinks, and a meeting with the Captain. But I do know the friendly part is right and we would book Bluebridge if we’re ever lucky enough to again cross the Cook Strait.
Bluebridge Ferry Information –
http://www.bluebridge.co.nz/