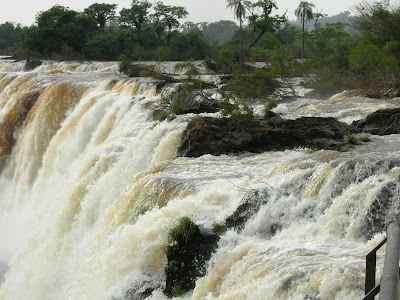 Iguazu Falls is actually 275 waterfalls except in the rainy season when it expands to 350 falls. Eleanor Roosevelt is reported to have commented, “Poor Niagra” upon first viewing this natural wonder. Located in the far north of Argentina across from Brazil, Iguazu is four times the width of Niagra and has twice the water flow. If and when water gets tight, we should all hop on down there. The falls are also located on top of the Guarani , the largest underground fresh water reservoir in the world.. It is, literally, water, water everywhere.

Iguazu Falls is surrounded by jungle, nourished by the mist of the cascading waters. National Parks on both sides of the border have been strict in limiting development, preserving the “natural” part of the wonder. Commercial flights regularly land at nearby Puerto Iguazu airport dispensing visitors, most on tours. I was traveling with my cousin who lived in Buenos Aires. We checked into the Sheraton International Iguazu, the only hotel directly in the falls park. It provided easy paths down to the cascading waters and had a nice view of its spray. The constant roar kept us mindful of the falls’ presence. 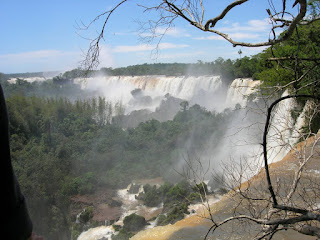 Our first outing was to be a train ride along the edge of the falls, supplying the only access to the famous horseshoe portion of the falls. However, record rains had washed out the tracks. The only other way to see those falls was from the Brazilian side, requiring the purchase of an expensive visa in town and an all day excursion. Our options settled quickly on simply exploring the nearest falls both from above and below, via the Upper and Lower Circuits. Over the next two days, I walked both of these paths three times, with a very different experience for each. 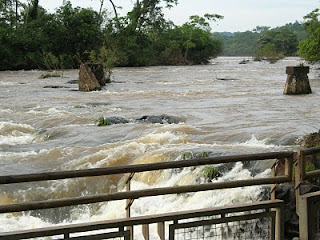 The Upper Circuit stretches along the top of a set of falls for about ½ mile. Metal cat walks allow the flow of water to rush underfoot while promontories furnish a safer place to view. Soon after arrival, we eagerly reached the end of the upper trail for our first panoramic view of the Herman, Bosetti, Chico, Ramirez and San Martin Falls. Actually, there was little distinction in the individual falls because of the massive waters flowing over from the recent rains. Anyone who can’t watch an IMAX movie would be dizzy here.

After lunch, a second walk down the Lower Circuit took us closer to the falls where Great Dusky Swifts floated in and out and orchids clung to vines. Every turn revealed a new, powerful fall until we walked out at the end to look up at a panorama of water and mist. 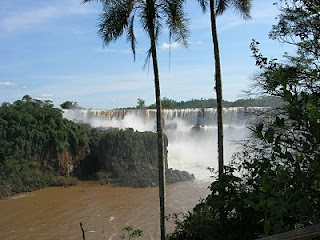 In normal times, a boat escorts you across the river to an island for a closer look. But that crossing had been also stopped by the excessive rain and flow of water. We did take a boat ride that took us as close to the cascading water as was safe. Watching the boat from the shore, it seemed to still be far from the heart of the falls. But in the boat, the spray of water from the falls alone drenched us all as if we were directly under the water. To return to port further down the river, the boat was simply put in neutral and rapidly whisked away.

My cousin was under the weather the next day and I tried both the Upper and Lower Circuits in the morning. The difference from the previous day was startling. I could hardly move because of the crowds. I had to push my way to the front of the look-outs as well as wait for people to pass across bridges. I kept looking for the weight limit signs on the catwalks. Photos were almost impossible to take without including a stranger’s head or hand. 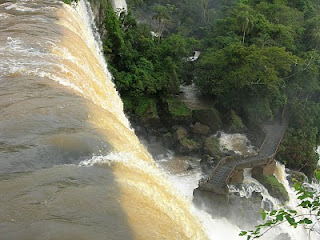 At 4 p.m. that afternoon, I tried the Lower Circuit again and the trail was all mine. The crowds were gone. At the end of this trail, a metal walk extends to the spray of the nearest fall. I had watched others make that walk in swim suits and I wore mine to try it. I was alone as I eased out, holding tight to the rails. 2000 cubic yards of water per second were roaring past, ready to whisk away anything in its path. I was surprised how hard it was to force the final steps. At the end, the falls seemed close enough to touch but you couldn’t. The spray drenched me and the sound blocked all other thoughts.

On the solitary walk back up the trail, a herd of coatimundis, cousins to the raccon, obstructed the way. Several iguanas also eased by. The animals stay low when the crowds are out. Fortunately, that includes the snakes. 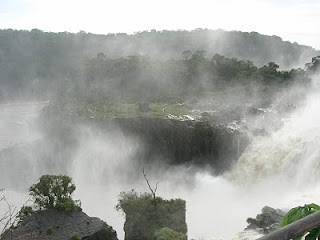 We were up at 6 a.m. the last morning to make our final pilgrimage along the Upper Circuit. Only the local birds joined us at that hour. Toucans and Motmots moved freely about. At the end of the trail, we simply stood over the fast moving falls and watched flocks of parakeets play. A parrot filled tree swayed nearby. On the mist covered island below, rainbows competed for attention. It was mystical and breathtaking and the view I carry in my head today.

We missed the train ride and the free boat ride. We missed the view of the horseshoe falls. We missed the walk to the Devil’s Throat falls. But our treks brought us much nearer to the heart of the falls where nature ignores the crowds and keeps on moving.