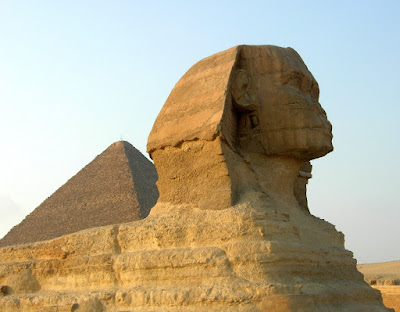 The Giza Pyramids outside of Cairo have been a tourist destination for over 3,000 years. Let me repeat that. Three thousand years ago, tourists from ancient Greece and Rome had heard of and traveled to see this marvel. It is the only original Seven Wonders of the World that survives. By looking up at the tip of these structures, you join Julius Caesar, Napoleon, Mark Twain, William Thackeray, and millions of others who were stunned at the skill of workmanship and the effort needed to complete them.

On the wall outside the Khafra pyramid, original hieroglyphics, or early day graffiti, revealed Ramses II had been there when he was Pharoah around 1300 BC. Writers from Herodotus in 449 B. C. to Amelia Edwards in the 1870s have tried to describe the significance of these tributes to the Pharoahs and their queens.

There have been dips and rises in the numbers who have come. It wasn’t a good time to visit in 969 when the Tunisian Fatimids marched 100,000 soldiers over the desert to take Cairo or in 1258 when the Mongols invaded Egypt. But tourism picked up in the 1800’s. Ancient Egypt was all the craze in Europe and camels were required, not just for photo ops but to ferry hoards of Englishmen to the site. Women, in their fine dresses and hats, insisted on viewing the pyramids up close and even on top. 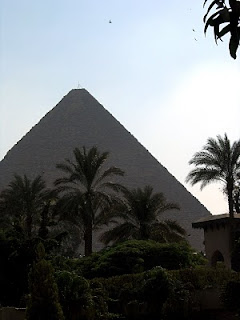 As thousands year old graves were discovered filled with gold bejeweled masks and other finery, the frenzy continued. Despite occasional tourists attacks even in our time, tourism is by far the number one industry in Egypt today. Until the latest recession, Russians were taking their turn at overrunning the Pyramids, Valley of the Kings and museums. Salesmen at the Pyramids shift effortlessly into English, French, German and Russian as they try ply their miniature pyramids, stuffed camels, and plastic jewelry, all made in China.

So, can it still be worth it? That interesting? Worth fighting the crowds? Of course it is. 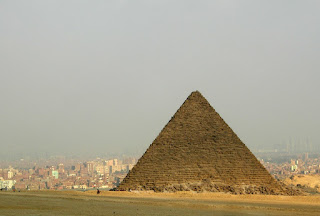 The Giza pyramids stand in the middle of a Cairo suburb but with sufficient desert immediately surrounding them to maintain their integrity. From a distance they seem small. Only by standing at its base can the achievement of their construction be felt. Amelia Edwards wrote in her book, “A Thousand Miles Up the Nile”, of the Great Pyramid “in all its unexpected bulk and majesty towers close above one’s head, [and] the effect is as sudden as it is overwhelming. It shuts out the sky and the horizon. It shuts out everything but the sense of awe and wonder.”

The tallest, the Great Pyramid, is the largest single structure in the world. Its limestone blocks are so tightly packed that a knife can’t be inserted. Very recent excavation reveal that the workers were not slaves as commonly believed. They worked three month shifts and were fed well with meat and beer – similar to our modern day, off-shore oil workers.

In the past, tourists could climb to the top of the pyramids. But today, the major “extra” adventure offered is burrowing through tunnels inside either Khafra’s or Cheop’s pyramids into the chambers where kings were previously buried. Signs warn claustrophobic visitors shouldn’t try this. The tunnel into Khafra’s was about four feet tall and wide. I thought I wasn’t claustrophobic but learned otherwise. All had to walk hunchback, a kind of compressed duck walk, seeing only the person in front. It was hot and humid. Imaging helped calm breathing. We were only in the tunnel about five minutes but it felt forever. Finally, we burst into a remarkably large inner burial room with only an empty sarcarphogus to prove its original intent. A “guide” pointed out that it was indeed a sarcarphogus and then asked for “baksheesh” or a “tip”. I was so happy to be standing, I would have given him anything. 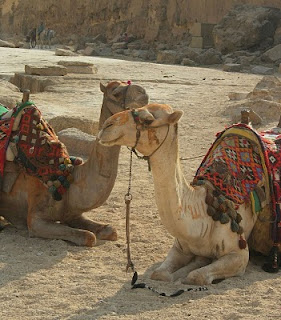 Outside , you also have many opportunities to be photographed with a bedecked camel and to ride on said bedecked camel. Negotiating is de rigeur and saying no impossible.

The Sphinx was the surprise and has its own riddle. It may be older than the pyramids and no one is sure of its purpose. 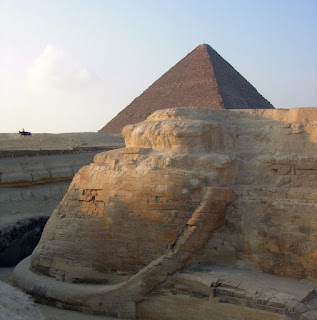 The lion’s body lounges patiently in the sand with its tail circling comfortably around. In “Innocents Abroad”, Mark Twain described its great human face as “so sad, so earnest, so longing, so patient………… It was stone, but it seemed sentient.” This is where the crowds congregated late in the afternoon as all tried to get as close as allowed to the excavated feline.

The Sphinx supervises the Nile and modern day Cairo, a view that has evolved over 3,000 years of watching. But having tourists nearby hasn’t changed much. The fascination with the shape, angles, size, placement and reasons for the pyramids will surely continue for another three thousand years as visitors connect with a fascinating past that has slowly revealed its secrets.