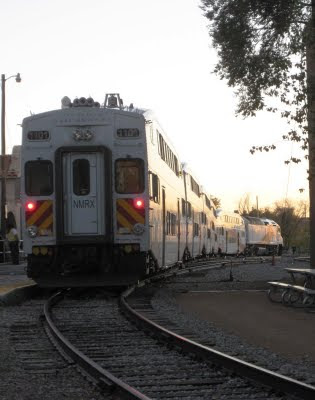 My brother, Gary, has always loved trains. He’s ridden the Rocky Mountaineer across Canada, Coastal Starlight from L.A. to Seattle, SW Chief from L.A. to Chicago, Sunset Limited between L.A. and Houston and the Northeast Corridor from Washington, D. C. to Boston. He can still name the passenger lines that no long exist such as the Lone Star from Houston to Chicago and the San Francisco Chief. For the last 24 years, he has helped the Albuquerque model train society construct a model train set for the New Mexico State Fair and currently, he’s refurbishing an old Santa Fe steam engine. But I never understood how train savvy he was until we rode the New Mexico Rail Runner together. 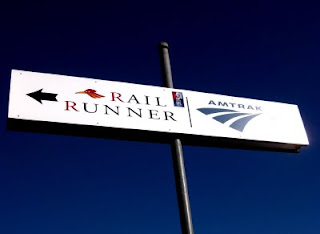 The New Mexico Rail Runner opened for business in 2008 offering service between Belen (30 miles south of Albuquerque) and Santa Fe. The railroad caters to commuters during the week and tourists on the week-end. The charge is modest. To travel from the downtown Albuquerque station to the heart of Santa Fe costs $4 on the week-end or $6 round trip. This, obviously, doesn’t cover the cost of operation. According to Gary, no urban commuter train in the world pays for itself. Government supports the rails for various reasons – to relieve traffic, eliminate road building and protect the environment. Whatever the reason, it is a delightful option.

On a whim, my brother, mother, and I hopped on board late one Saturday afternoon in October to travel to Santa Fe for dinner. 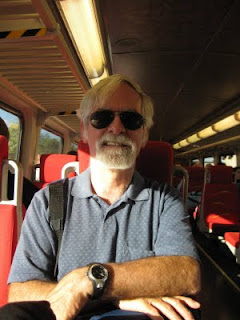 Surprisingly, it was Gary’s first ride on the train and he couldn’t stop smiling. As is often the case, railroad tracks pass through warehouse districts and run-down neighborhoods and Albuquerque was no exception . We picked up speed as we exited the suburbs to our top velocity of 79 m.p.h.( to be exact). My brother noted that if the train traveled 80 m.p.h. or faster, special electronics were required. He also identified each spur as it was passed – that one goes to the General Mills cereal plant and this one serves a sheet rock plant, etc.

The passengers were a mix. A group of women cyclists had biked from Santa Fe earlier that day and were hitching a ride back. Storage was available for the bicycles. A Native American family played cards while a young couple sat close. All of us had wonderful views from the upper deck of our car. 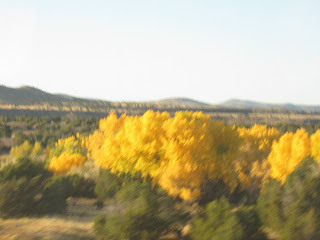 The track moved between the Rio Grande River on the west and Interstate 25 on the east, occasionally favoring one or the other. Bright yellow cotton wood trees followed the river and the Sandia mountains supervised the action. An announcer advised that we would be passing through Indian Reservations and that no picture taking was allowed during that time. Children played volleyball in the San Felipe Pueblo and Indian moms were baking bread in the traditional “hornos” or ovens behind their homes in the San Domingo Pueblo. – views that are not available on the interstate. We passed close to an old water tower, all that remains from a saw mill that processed lumber from the nearby Jemez mountains. 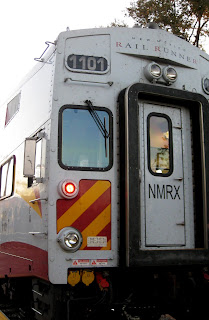 I learned today’s engines stay on just one end of the train. If the train is headed in the opposite direction of the engine as ours was, an engineer sits in a telephone booth size compartment in the last passenger car (now the front of the train) and directs from there. The diesel powered engine is like a mini power plant. It generates electricity that is transferred to electric motors on each of the wheels.

Gradually, our Rail Runner began to climb. The original tracks from Santa Fe to Albuquerque went through Lamy, a more gradual route currently owned by the Santa Fe Southern RR. For the New Mexico Rail Runner, the state of New Mexico bought the entire line from Belen to Trinidad, Colorado from the BNSF Railroad. Gary gave me a short history of all the mergers of railroad companies and what the initials meant but I got lost. Even modern day trains can’t climb the steep La Bajada hill where the Interstate runs so the state had to blast through some smaller hills and lay a new track for a part of the line. On the older portion of the track, old telephone and telegraph poles can still be seen. Nearby are solar powered reception poles to provide future WIFI coverage along the route. 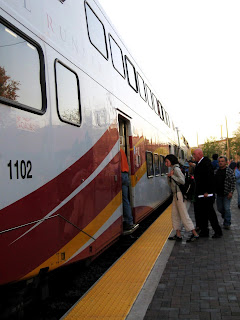 We pulled into the old Santa Fe railroad station on time as the sun was setting. A crowd awaited our exit from the train as many were ready to return to Albuquerque. Zia’s Diner was only a short, one block walk where my sister-in-law held a table for us. What a relaxing way to travel. We can only dream of being able to make a fast trip to Dallas on rails without having to keep an eye on the road and the cars whizzing past. New Mexico made a commitment to an old form of mass transit in a new package. Anyone near the area should take advantage of it – even without your own personal guide.