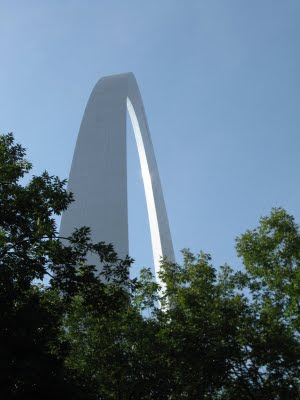 Meet me in St. Louis, Louis
Meet me at the Fair
Don’t tell me the lights are shining
Any place but there.

We will dance the Hoochie -Koochie
I will be your Tootsie-Wootsie
If you will meet me in St. Louis, Louis
Meet me at the Fair

I don’t know what the Hoochie-Koochie is nor if I would want to be anyone’s Tootsie-Wootsie, but I do know that St. Louis is a wonderful city to visit, even for just a wedding week-end. A nice surprise, really. 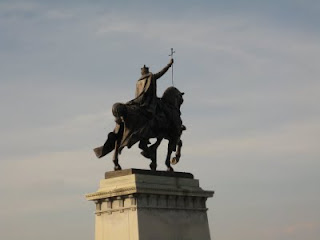 St.Louis was established by a French fur trader in 1764. If you had lived in St. Louis for the next 40 years, you could have been a French resident, then Spanish, then French again, and finally American in 1804 (rather hard on which language to learn) The city was named for a King Louis but there is some confusion on which one. Louis XV reigned at the time of its establishment and his patron saint was Saint Louis IX, the only canonized King of France. It is the latter King whose statute supervises Forest Park outside the St. Louis Art Museum and was the city’s symbol until the Gateway Arch was built.

The most memorable event to take place in St. Louis was the world’s largest fair ever in 1904 that celebrated the Louisiana Purchase a century before and spawned the song, “Meet Me in St. Louis”. In a six month period, 20 million people visited the 900 buildings constructed for the event in or near Forest Park. The only remaining original building is the Art Museum. However, the park continues to serve the community with the world class St. Louis Zoo, lakes and green spaces galore, an Art Deco, glass Jewel Box, an old fashioned band stand, and the Missouri History Museum – all free to the public. 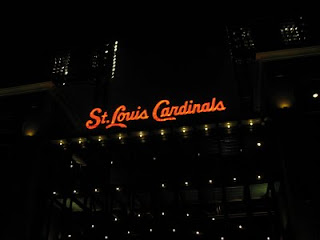 We were tipped off by our fellow travelers, Keith and Janet Green, that the St. Louis Cardinals were playing after the rehearsal dinner in the new Busch Stadium. Only standing room tickets were available. The last time we had the pleasure of being upright for an event was at an opera in Vienna, Austria, made even longer by the standing. At the time, we swore never again. But memory fades and we decided to try again.

Finding a place behind our allotted painted yellow lines was not easy. We hung out on the first level with the other late slackers until an usher gently encouraged us to find another spot where we would actually be behind the yellow lines and not to the side. On the third level, space was available and included a metal bar to lean against. But the top level was bright and empty of fellow standees. The arch could be seen in the background as well as downtown St. Louis – a very pleasant experience except that the Cardinals lost. 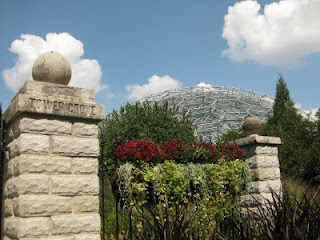 Fortunately for us, the wedding took place in the immense Botanical Gardens, one of the oldest in the United States. Besides being a popular wedding spot (five other young couples said their vows that day), over 100 researchers work at the gardens, one half of them with Phds. A 1960 Climatron (think metal Geodisic dome) provides an authentic rain forest experience while one can also stroll through the Chinese, Japanese, day lily, and rose gardens.

And what trip to St. Louis could be complete without venturing to the top of the Gateway Arch? It surprised and delighted us. 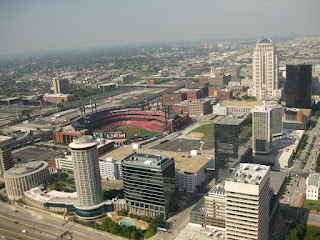 Underneath the silver rainbow, the guides direct five persons at a time to stand in front of individual, four foot tall painted doors. Suddenly, each pops open and five people cautiously exit the spacelike capsule. We mold ourselves in, the doors close, and the tram clanks back and forth up the curved interior of the arch. Because of the physical weight of the structure at the top, the windows at the top are narrow and rectangular, but the view spectacular.

St. Louis has lost its influence over the years. In 1818 it was the 4th largest city in the U.S. but now ranks 53rd. In the past , it produced the most beer, shoes, stoves, and wagons in the world. Today, Enterprise Rent-a-Car, Edward Jones, and Wachovia Securities anchor here, and much beer is still brewed through the giant company of Anheuser Busch. Because of its long, rich past, St. Louis has beautiful old buildings, neighborhoods, homes, and gardens. A wedding week-end was not enough to take it all in. So, we’ll just have to meet again in St. Louis.