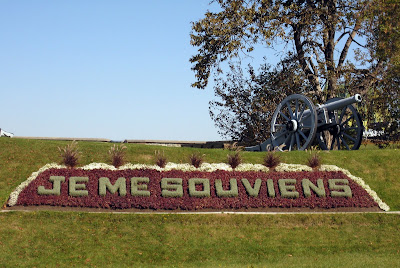 It was one of the first things we noticed in Quebec City. We arrived late at night and hailed a taxi to our hotel. While waiting at a stoplight, my husband read these words on the license plate of the car ahead – “Je Me Souviens”. I asked our driver in French its meaning. Fortunately, he replied in English – “I remember”. Our next question wove its way throughout the trip. “What exactly do you remember?”

The taxi driver believed it meant they remembered a 250 year old battle from 1759 when the English defeated the French in Quebec. This was not just any old skirmish. The Battle of the Plains of Abraham permanently changed the boundaries of what eventually became Canada. General Wolfe surprised the French by sneaking up the cliffs at night and attacking behind the city. French Commander Montcalm had expected a landing from the river level and his troops literally had to run five miles back to the real battlefield, arriving exhausted and disorganized. Twenty minutes later the battle ended. Seriously, in 20 minutes, the time it takes to drive from Paris to Honey Grove, Quebec City became English. The actual war didn’t end for two more years but this battle gave the English control of the St. Lawrence River and soon all of La Nouvelle France joined the British Empire. The French government left but the most of the French citizens that had settled there stayed. 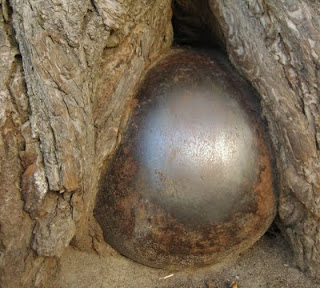 I relate this story in detail because its history permeates Quebec City, even today. A cannon ball from the shelling of the city by General Wolfe is still lodged in a tree along Rue St. Louis. 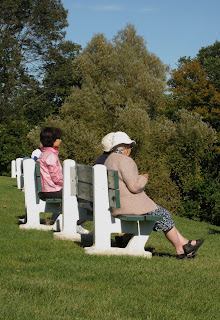 The Plains of Abraham is now a wonderful park where Quebecans stroll, play soccer, and lounge on the many benches to enjoy the view of the St. Lawrence. And at the lovely Jardin des Gouverneurs (Governors’ Park), the Wolfe-Montcalm Monument pays tribute to both the winning and losing generals in the big battle.

On a walking tour the next day, we heard the official interpretation of “Je me souviens”. Our guide explained the phrase to mean, “I remember my history”. Canadian history is divided into thirds, French, English, and then Canadian. “We remember each part of our heritage,” she explained dutifully. This is supported by the large number of statutes in front of their parliament building that reflect the heroes of the founders, clerics, French and English governors, and the Amerindians.

A visit to the incredible Citadel fortress, built to protect the city from the Americans, provided a third interpretation of the phrase. The 22nd Royal Regiment, the only French speaking unit in Canada, has its headquarters in the Citadel. It is a fighting unit. Of the 2800 Canadians in Afghanistan, 1500 are from the 22nd. The flag was at half mast on the day of our visit because a Canadian soldier had died in Afghanistan. The unit’s motto, “Je Me Souviens”, is meant to honor their fallen comrades. Every day, an officer reads out the names of the members of the regiment who have died so they will not be forgotten.

With the rest of their country speaking English and the giant America at its heels, Quebec Province decided thirty years ago to get serious about remembering its heritage. Signs in English were taken down. Students were required to attend French speaking schools with only a few exceptions. The Quebecans consider their French more pure than that of France, albeit with a different accent. Quebec Province even came close to voting to secede from Canada. Today, the secession fever has abated but their pride has not. It is reflected in their truly wonderful food. 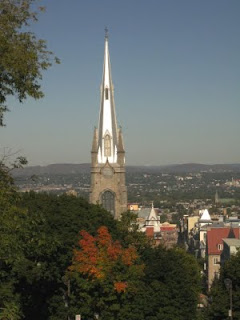 The population is far more Catholic than the mother country. At a hotel in the country, our room had a list of daily masses at the nearby church. And they welcome immigrants, provided the newcomers learn their language and accept their culture.

It is important to promote an area’s history. “Remember the Alamo” is a proud Texas phrase that inspired those fighting for our independence. It may become our motto if we ever wanted to secede. “Je me souviens” has come to reflect Quebec’s pride in its roots and has given the citizens of Quebec the determination to protect their language and culture. The result is a bonus for tourists – a beautiful French speaking location, historical preservation and wonderful cuisine – all without having to cross the ocean.