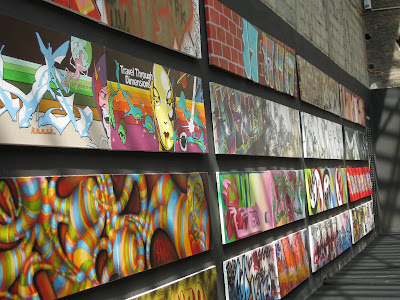 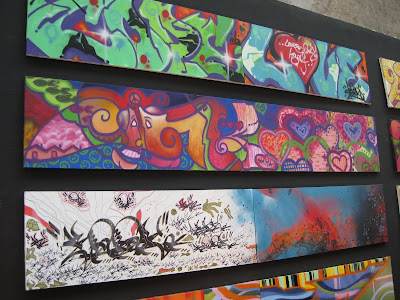 I first noticed the graffiti on the train ride into Paris (France) from the DeGaulle airport. Curvy bubble letters were everywhere – on apartment buildings, overpasses, warehouses, stores, and even the trains themselves. The combination of letters made no sense in French or English. KERS, RIZOT, FUMI, TRANE, TAKE, SEYA. 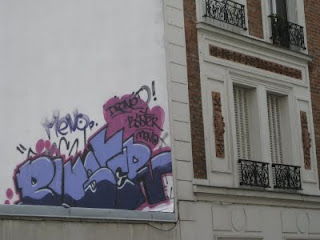 Once the graffiti caught my eye, I saw it everywhere. The booksellers’ stalls along the Seine were a target as was the canopy of our favorite restaurant. Initials were painted on the bottom of a lovely fountain in the Pompidou Museum. Heartfelt comments decorated the stone above the tunnel where Princess Diana had died. 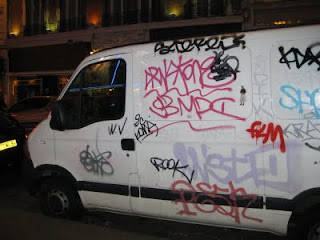 White vans were irresistible targets. A French friend of ours called it an “infestation of graffiti”.

Graffiti originated as an American art form in the streets of New York four decades ago. Gang members used a “tag” or name to mark the boundaries of their territory. Soon, individual artists developed their own style and signature. Most were young, poor and used the concrete canvases available to them. 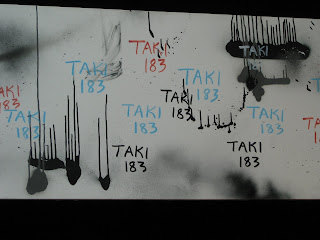 In the graffiti world, the tag of Taki 183 is equal to the names of Rousseau or Degas in the Impressionist movement. This art form gave herds of energetic adolescents the power to rise above the force of their urban poverty. They loved the fleeting nature of their art and that thousands saw it from subway trains. A special paint was even developed for graffiti use. The movement spread world wide and became an element of Hip Hop.

France can’t decide what to do with this art form or even whether to call it art. They use the English word, Tag, to name it. Pierre Cornette de Saint-Cyr, president of the Association of Palais de Tokyo, feels “99% of the taggers are cretins who only want to foul walls”. The French spend millions cleaning up the painted walls and at the same time have authorized certain walls in town to be used for this expression. Jean Philippe Domecq has said in Le Point Magazine, “the state is punishing these people on one side and welcoming on the other. The state is so afraid of missing another Van Gogh, it throws money at every fad. This is subsidizing subversion”.

After recognizing graffiti’s presence in the City of Lights, we learned the world’s first Tag Exhibition had just opened at the Grande Palais, the same beautiful building where Yves St. Laurent’s art collection had recently been auctioned. 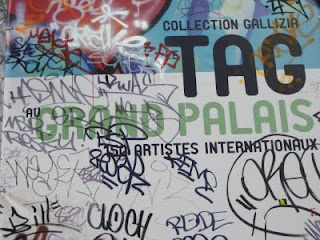 Posters for the exhibition were placed around the city, all appropriately covered with real graffiti. One hundred and fifty of the world’s notable graffiti artists were represented. Each produced two canvasses, one based on the graffiti idea of the name or tag and the other a work that symbolized love.

Colors, movement and large figures dominated the exhibition. EZO of the United States painted comic book like characters while LADY PINK’s faces could have graced a Tommie de Paulo’s children’s book. The French BANDO’s tag tilted as if being read in motion. 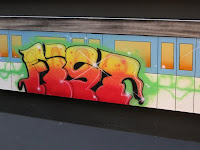 Both the French FIST and the American FAUST placed their oversized tags on subway cars. 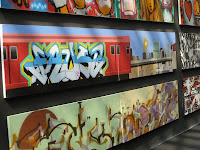 Some artists used the medium for philosophical comments such as“Love and Hate have the Same Address” from the Swiss NASTY. And what would an exhibition be in France without a thick lipped, naked woman? France’s UNO provided one with a spray can under her arm. 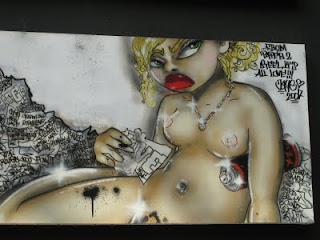 The subject of the pieces as well as the bold techniques stimulated much conversation among the mostly young and often tattooed viewers. But the paintings were a far cry from the simple tags of letters that were painted on too many surfaces in the city.

So, was the Tag show the “impressionist” exhibit of our times? Many Parisians were outraged at the Salon des Refuses that first presented Monet, Manet, and others. Modern day Parisians were conflicted at the Tag show and even those who like the idea of graffiti don’t want it on their walls or bathrooms. But they did attend in large numbers.

The show’s producer, Alain-Dominique Gallizia had to promise his artists that he would never sell or divide the collection. Most graffiti artists are not ready to sell out although a market has recently developed for tag posters and t-shirts. They continue to enjoy the adrenaline associated with the fast nature of their art and the rest of us will continue to be divided on the worth of their expression.