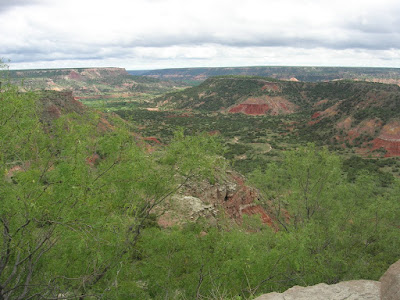 When was the last time you used the word escarpment? Maybe never? It is a geological term and Texas has more than one. In geomorphology, an escarpment is a “transition zone between different physiogeographic provinces that involves a sharp, steep elevation differential, characterized by a cliff or steep slope.” Have I lost you? What we’re talking about is the Caprock Escarpment, the wonderful approach to the high plains of the panhandle of Texas.

Sketched on a map (you might want to pullout your Texas map), the escarpments on the east and west look like castle walls hugging the edges of the Llano Estacado, a flat semi-arid plateau where Amarillo and Lubbock preside over the fortress. It runs 300 miles on each side. Our very own Red River starts up at the Prairie Dog Town Fork, one of the waterways that helped cut and create the canyons and many cliffs. 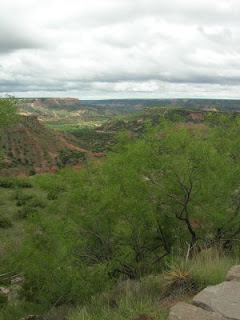 The most famous part of the Caprock Escarpment is Palo Duro Canyon, a jewel of a canyon and home to Palo Duro Canyon State Park (75 years old this summer) and the musical “Texas”. If you have missed it, go. If you haven’t been there recently, go back. It is that beautiful. 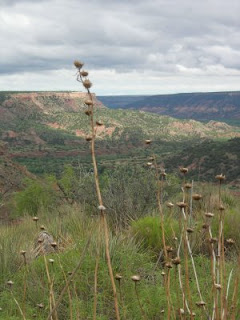 Even though it appears to be a miniature Grand Canyon, Palo Duro Canyon is actually the second largest canyon in the United States. It stretches 120 miles long, 20 miles across at its widest point and up to 800 feet in depth. The state park only includes some of Palo Duro’s most northern canyons. If you’ve ever wanted to live in a canyon, nearby Timbercreek Canyon has a gated community with 500 residents. It was hard to believe I was in Texas as I recently sat on the porch of a friend’s home in Timbercreek with her own canyon wall as a backyard.

An easy way to see a large swath of the lower Palo Duro Canyon is to take highway 207 from Claude to Silverton, crossing the Prairie Dog Town Fork and coming out on the plains. This a lovely drive even if it’s on the way to and from nowhere. It does eventually pass through Tule Canyon with its MacKenzie Reservoir.

Further south is one of the newer parks, Caprock Canyon State Park and Trailway, which has great views of the “scarp”. You can cycle, walk, ride horses or run the 64 miles of the Trailway or any of its six segments you choose. It is the ultimate rails to trails path that runs from Estelline to South Plains, passes over 40 bridges, through a 700 foot tunnel and occasionally follows the top of the escarpment. 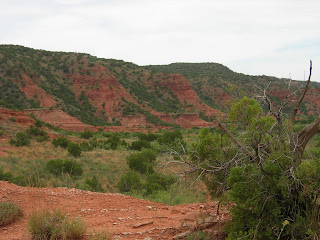 The State Park itself is outside of Quitaque (pronounced kitty kway) and located near Turkey. (I’m sure that orients you.) The park also has trails and 30 miles of paved roadways among the surrounding canyon walls. If lucky, you’ll spot the official state buffalo herd which is descended from the original free range southern bison. The Spanish described these creatures as cows with a narrow, short face, and long beards (like goats) and when they ran they threw their heads down with the beard dragging on the ground. No wonder the vast buffalo herds frightened every horse the Spaniards brought. The state herd is the last one left.

In “A Voyage Long and Strange”, author Tony Horowitz tracks Coronado in his search for El Dorado in 1541. The latest archeological discoveries confirm that Coronado must have crossed New Mexico from the west into Texas where he first encountered the plains filled with grass that “straightened up again as soon as it had been trodden down”. He passed near modern day Plainview and Floydada until being startled by a broad ravine about half a mile across and a hundred feet deep – the Caprock Escarpment, what else! According to Horowitz, in 1966, a Spanish gauntlet or chain-mail glove was discovered by a farmer at the edge of the Blanco Canyon. Later excavations found horseshoes, nails, and crockery – a treasure chest of Coronado’s artifacts resting today at ….. the Floydada museum. Amazing.

It’s hard to believe escarpments can be entertaining. Driving from Plainview to Paris across the flattest and best farm land around is a lot more fun knowing that at any moment, the land is going to drop out from under you. On your next trip west, even for a long week-end, try exploring the wonders of the Caprock Escarpment.

For more information on the state parks, places to stay and the escarpment, these sites are helpful.