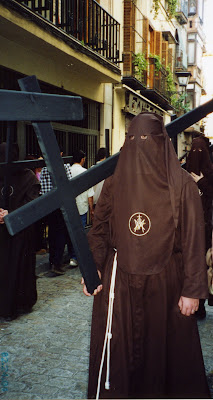 The use of drama in religion is universal. Hindu scripts date from the 4th century and include gods and heros. The stories of Ruth and King David are relived at synagogues. The Hajj pilgrimage features a symbolic stoning of the devil. Even the live manger scenes at some of Paris’ churches carry on a centuries old tradition of Christmas performances. But one of the most moving pageantries in the world is Holy Week in Seville, Spain – La Semana Santa – where the story of the crucifixion is played out in the streets.
I first learned of this event from an advertisement. It was a travel poster of a silver Virgin Mary, lit by thousands of candles, surrounded by as many flowers, being carried on a float at night through the narrow passageways of Seville. It seemed so magical and beautiful and I wanted to be there. Fortunately, a niece decided to study in Spain several years ago and my sister-in-law, daughter, and I joined her for this ancient event.
The first of the 57 processions begins Palm Sunday night. During Holy Week, every church in Seville (really every church in Spain) will bring their Virgin Mary statue out of the church, process to the cathedral, pass through its aisles, and return the prized possession to her home for another year. There are day marches with children, silent processions, evening parades and one that starts at midnight. Some are brief and others miles long. They can be viewed from the streets, balconies, grandstands or on television. School is out and the sidewalk cafes fill with families visiting and children playing, awaiting the next procession. 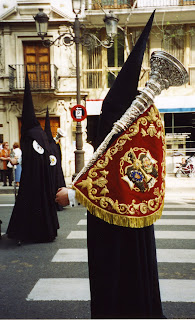 A procession announces its coming with La Marcha, often a brass band. Also at the beginning is La Cruz de Guia, a banner identifying the church. Even if you aren’t a member of the church, you can walk with the next group, La Bulla, the crowds who join the parade. The largest part of the procession consists of Los Nazarenos, members of the church’s fraternity who perform public acts of religious observance and penance as well as charitable and community work. You can’t miss them. They wear long habits, pointed hoods which allow only eyes to peer out and often carry candles. The robes and hoods bear a disturbing resemblance to the Ku Klux Klan’s uniforms but the Nazarenos’ need for anonymity is different. Participation in the Holy Week processions is a penance and the covering allows even the royalty to participate without being recognized. 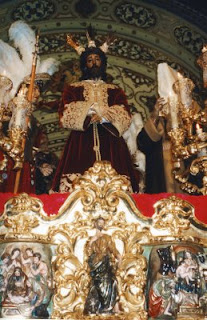 Next is El Paso de Cristo, a float with an image of Christ, usually on the cross or struggling with the weight of the cross. It is carried by 20 to 30 men who go unseen under the platform. The Penitents, also Nazarenos but with flat hoods, follow, carrying a cross and often barefoot. And finally, El Paso Palio, the float of La Virgen, that dramatizes the grief of a mother for the death of her son. All observers stand and are silent as this scene passes, even the children and those drinking at bars. Occasionally, a person is moved to sing a saeta, a spontaneous, improvised lament. One evening at dinner, I stepped outside our restaurant on a porch. Only a waiter and I stood watching a silent procession pass by on the very narrow, ten foot wide lane. We were at eye level with Jesus and Mary on their floats and so close, we could have touched them. I remembered the words of Orlando Gibbons’ beautiful hymn, “Drop, drop, slow tears and bathe those beauteous feet”. The most beloved Virgin is La Macarena, patron saint of matadors and no kin to the song. On Holy Thursday, we waited in light rain for one and a half hours to see her before she left the basilica on her pilgrimage to the cathedral. The Sevillan women were all in black that special day – dress, stockings, mantilla stiffened by shell, lace gloves, and stiletto heels. (I, literally, felt flat-footed.) Men and children also dressed their best. The line circled the tearful Virgin who is later carried on a solid silver paso with hundreds of candles and flowers and does not leave the sanctuary until midnight.
We joined the crowds again that night waiting for La Macarena to pass by. It was a two hour wait before her huge procession reached us at 2 a.m. The short walk to our hotel took another hour. At 11 a.m. the next morning, our taxi encountered the end of the Macarena procession slowly lumbering its way back to her church. Her journey would last twelve hours.
There are many tourists in Seville for La Semana Santa and yet the event has not become commercialized. Through the pageantry and the enormous community participation, generations have connected to the tragedy of the passion. It is a tribute to a church who wanted to bring its central story to the people and to a city that understands the power of drama.