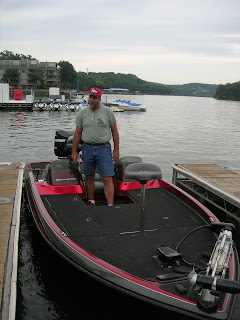 Keith Enloe arrived in a 522VX Ranger Bass Boat. He was surprisingly agile considering his six feet six inches height and 330 pound weight. By appearances he should have played football but basketball was his love and in his day he could jump 38 inches. A broken ankle shattered that dream and now he makes a living as a fishing guide and instructor on Lake of the Ozarks where he grew up.
It wasn’t our first time to fish but neither my daughter nor I really understood the basics nor knew the lingo of fishing. Keith was the man to get us started.
First, there was the lake itself. Once the largest man-made lake, the numbers for the Lake of the Ozarks are impressive – 1,150 miles of shoreline equaling that of California, 100,000 boats, and 45,000 docks. Since it is located only three hours from each of Kansas City and St. Louis, many second homes are built here with the required extra nautical toys. Thirteen pound bass have been caught and each fishing guide has his or her favorite spot. On a holiday week-end, it can have a rush hour traffic feel with the numbers of boats using the lake. However, the morning of our lesson was overcast and the lake relatively calm. 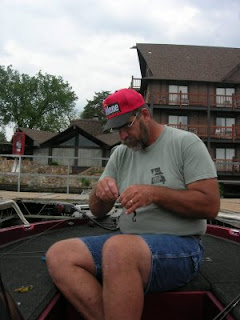 We were after bass. There were plenty of other fish to try for – catfish, carp, crappie, buffalo, sunfish, blue gill, walleye, and gar. But it was the “green sided monster” we wanted to catch. This would require the right bait and place. Keith started pulling out necessary equipment from the boat’s treasure chests. He was quite proud of the ranger boat noting that it would cost $60,000 today. The long chests had holes for the fishing poles to set in. Other chests contained books, bait, lines, knives, tools, wet storage for the fish, cool storage for drinks and one for trash. Our poles were soon hooked with the appropriate multi-colored plastic worms. 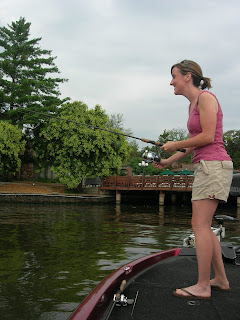 The boat was so steady we could stand to cast. Keith gave his instructions. Pull the pole back. Bring it forward, let it go at “11 o’clock” and then allow the line to fall to the bottom. Tighten the line and gradually reel it in. We “caught” the bottom a lot. That’s OK, he said, “you’re feeling the bottom.” “You’re in the right spot.” He was irritated about the junk on the bottom of the lake such as trees and brush. Those aren’t needed to attract fish according to our knowledgeable guide. We had a few nibbles and a few real bites. Keith noted that the main mistake of beginners is not setting the hook when they first feel the bite. Bass’ mouths have bones on the top and you have to hook it hard.
It began to lightly rain which for fishermen is a good thing. Rain stirs up the lake and fish don’t know if it’s food or rain. Currents can affect fish in the same manner. There’s debate on whether moon cycles encourage fish to bite but there’s no debate that they are as sluggish in heat as we humans are.
The showers came and went as we explored a couple of sites. Clearly, Keith enjoyed visiting while we continued to cast. “Who are you supporting for president?” he asked with a mischievous grin. We all agreed people were over their head in debt and some banks deserved their troubles. Lake politics entered the conversation when he noted the lack of zoning restrictions in the area and the incredible number of boats. 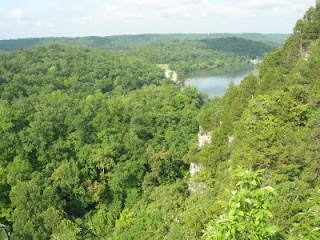 We were getting wet and needed to come in. But there was some thing hypnotic about the casting, like one more pull on the slot machine. At this point in our fishing careers, we were just proud to have a good cast. Neither Ellen nor I caught a “real” fish and yet it was more fun than we expected. The investment of time and money is too high to become a serious fisherwoman but I am closer to understanding the allure of angling – thanks to a good fishing guide and a beautiful lake.