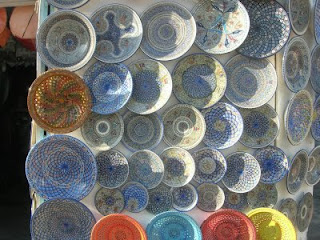 The shopping mall has been with us for over 50 years and the modern supermarket started with a Piggly Wiggly in 1916. But their predecessors began centuries ago. I was reminded of that on a recent trip to Tunisia and Sicily, fascinating destinations that lie just across the Mediterranean Sea from each other – each with its own unique market places. 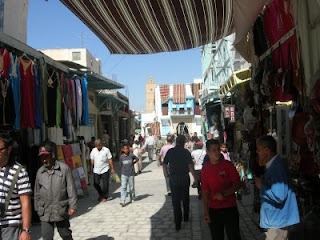 Medinas were originally the actual walled cities of Northern Africa. The community lived and worked inside the compound for safety. Today most of the population of Tunisia’s towns have moved beyond the gates, but the commerce (especially for tourists) continues in its ancient setting. To stroll through the narrow, cobblestone lanes, with awnings blocking the hot sun and shopkeepers barking their wares, is to join generations of previous shoppers.
The Arabs long ago understood the idea of clustering similar products. Just as many Red Lobster restaurants are near an Olive Garden to encourage traffic, shops in medinas were arranged by Souqs that identify different commercial areas. In the Tunis medina, the Souq-el Attarine or Perfume Makers Souq dates from the 13th century. In the Souq Etouffes, stalls still sell cloth and clothes. Some of the Souq’s products have changed. The Souq el Berka originally sold prisoners of pirates for slaves. It is now, ironically, a gold market where young lovers come to buy the ring, bracelet, and necklace set required for a proper wedding. 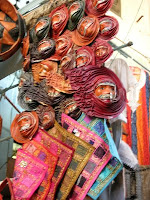 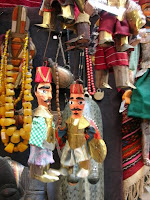 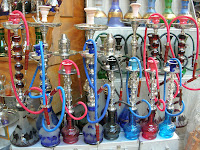 Shopkeepers quickly size up your nationality and try to guess the appropriate language of greeting. Since there were few Americans traveling in Tunisia, we were most often welcomed with a “Good Morning, Madame. British?” French was the second inquiry. A good keeper could keep guessing – “Francaise” “Deutsch” “Espanol” “Italiano”. The ultimate was a greeting in Russian. Once the language is established, the negotiations begin.

There are no published prices on products in the Medina. Because of the proximity of similar products (“stores” are really stalls six to eight feet wide), an inquiry or two will provide a sense of a product’s beginning price. Guide books suggest bargaining hard by starting at one-third of the price. Sounds easy, right? It was hard to even start at half the price until I got taken. First set of tablecloths seemed like a steal at a finally negotiated price of $10 each. But then a vendor next door stated his set pricing at $5 each. Oh, well, price averaging helped ease the pain of loss. 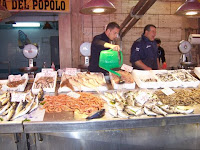 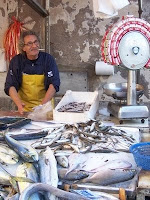 Just across the Mediterranean, on the island of Sicily, Siracusa hosts a wonderful outdoor market every morning. Fresh seafood dominates, but the sales technique was unique and amusing. Ok, you are probably reading this at your kitchen table on Sunday morning. I want you to engage the sullen teenager across the table from you ( a spouse will do in a pinch). Tell him or her that you are both fishmongers in Italy and are going to compete for customers. Now, in a very loud voice (don’t hold back), yell “pesci fresci”. (or for those who don’t speak Italian, “pes kee, fres kee” meaning fresh fish) The startled teenager is now supposed to echo back “pesci fresci” in an equally powerful manner. Soon you should be dueling it out by competing for the loudest voice. For real authenticity, hang a cigarette loosely from your mouth! 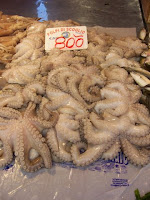 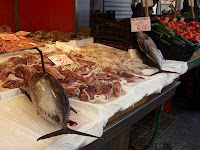 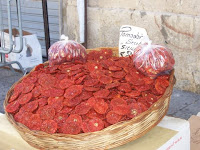 Obviously, American malls don’t have the rich history of a medina with its shops, homes and mosques. But the arrangement of clustered stores, coffee shops (minus the hookahs), and restaurants in North Park Mall is directly connected to the layout of a medina. And Kroger’s fresh produce department in Paris is arranged to imitate an outdoor Italian market. It’s a nice human connection. Now, if we just had the fishmongers.

One Response to “On Tunisian Medinas and Siracusa’s Fish Market”