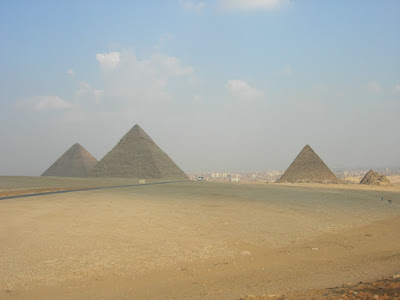 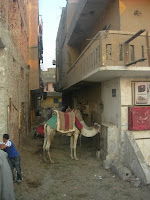 The Desert Road from Cairo to Alexandria is a swift journey from Egypt’s past to its future. In parting Cairo, we crawled through a few of its poorer neighborhoods where camels trotted down narrow alleyways and donkeys pulled trash-laden carts. The dust shrouded Giza pyramids appeared suddenly, facing some of Egypt’s most luxurious hotels. And mountains of nearby sands gave notice of the approaching desert.
Despite its exotic name, the Desert Road is now a four to six lane toll-way reducing the trip to Alexandria to three hours, a far cry from the multi day experience of the past. Thanks to the construction of the Aswan Dam, Egypt controls the distribution of water through the Nile and its tributaries. The fields along the road use this source to irrigate olive, apple, orange and banana orchards, vineyards, date palms, and fields of cabbage, corn and other vegetables. We passed small trucks filled to the brim with tomatoes grown in nearby greenhouses. The government has encouraged cultivation by providing land to would be farmers who are allowed to keep their profits. The farms alternated with new “compounds” – walled and gated subdivisions serving Cairo’s commuters.
Along the road were glimpses of the past as men in the long, flowing galabyas worked the fields or tended goats. Women were more likely to be covered completely in burkas than in the cities. Stretches of barren, dry sand encroached on farms. And pigeon towers adjoined many homes. These cone head hives house trained pigeons who attract fellow birds to roost in the punctured holes. Pigeons, the “food of King Farouk”, are served grilled or stuffed with rice and are very popular with Egyptians.
Large, modern roadhouses appeared regularly providing gasoline, food, small stores, cappuccino and an occasional mosque. Children’s amusement parks with names like “Week-end” and “Aqua City” hinted at the heavy use of the road for vacationing Egyptians. And a large prison seemed appropriately placed.
As we approached Alexandria, Egypt’s emphasis on international trade became obvious. Its suburbs host factories that produce cotton ware for such U.S. companies as Docker and Timberland. Because of the duty free zone status, clothes’ labels can read “made in the U.S.A.”. Pharmaceutical companies, Pepsi, Ikea, and General Motors are all present as well as Egypt’s thriving natural gas and gasoline refineries. Yet nearby, hand-poled boats are still used to harvest marsh reeds for basket making as in the time of Moses. 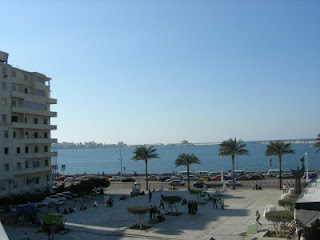 Alexandria soon arrived with its modern malls and free-standing McDonalds. The beautiful corniche avenue, built by the city’s businessmen, weaves along the Mediterranean Sea past waves of apartment buildings used by Cairo’s elite in the summer. A beautiful Four Seasons hotel reflects this city’s current international status while newly discovered Roman ruins provide proof of its past glory. 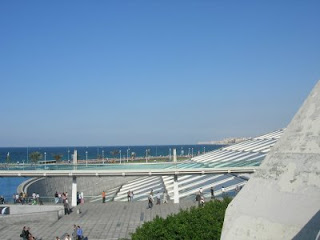 But today, the jewel of the coast is the stunning, six-year old Alexandria Library, funded primarily through UNESCO and U.S. aid. Its goal of being the center of Middle Eastern learning and Arab reform are lofty and exciting. Twice monthly, dialogue forums provide free exchange of ideas. The location adjacent to the University of Alexandria assures heavy use by students of its 600,000 volumes and the large digitalized library. Because Egypt recognizes Israel as a country, the library also serves as a neutral forum to promote resolution of the Palestinian issue. A science museum and planetarium support the Academy of Science that was begun in 1798. It’s a very busy place.
With its 20 million inhabitants, Cairo still dominates the economy of the country. Tourists are more likely to visit the pyramids than any other site. The road to Alexandria, though, tells the story of Egypt’s expanded development which the government hopes will provide needed employment. But it also leads you to the clean, fresh air of the sea, an alluring prospect indeed.