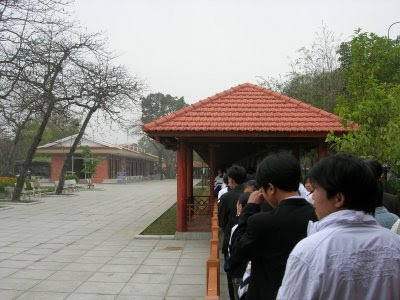 It’s not easy to see Ho Chi Minh. He has been dead for thirty-six years. His last will and testament asked that a grand funeral should be avoided in order not to “waste the people’s time and money”. This direction was ignored by over a quarter of a million Vietnamese who attended his funeral And despite a request to be cremated, his body has been preserved for all to view. A visit to his mausoleum in Hanoi, though, requires patience.
The mausoleum is only open for three hours in the morning. It’s located on Independence Plaza where Ho Chi Minh read from our very own Declaration of Independence in 1945, as he declared the Democratic Republic of Vietnam a sovereign nation separate from France. He had hoped to have the support of the United States in freeing Vietnam from the French rule. But he didn’t. Vietnam then spent the next 30 years fighting for its independence.
We arrived in the front of the plaza and walked the length of a very long block to the entry. Over 2000 Vietnamese were already waiting in line to pay their respects to “Uncle Ho”, a large percentage of them schoolchildren in matching black and white nylon outfits. A guard sent us to check our back packs and a later guard required the cameras to be also checked, thus mandating a later pick up at two different places. The Vietnamese graciously allowed us back into the line each time. Guards were posted at very regular intervals. In the far back of the line, old and young were casually talking. Behind us was a group of giggling high school students who were eager to try try their surprisingly fluent English with us. “Hi, Where are you from? How do you like Vietnam?” They lived in Hanoi but had never been to the mausoleum. 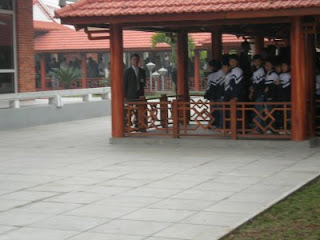 As we moved closer, the serious guards silenced us completely and required all to walk in pairs.
Tucked deep inside the austere granite and concrete government temple is Ho Chi Minh’s body. The building is modeled after Lenin’s mausoleum in Moscow. Ho has been preserved for these many years primarily through the efforts of the Russians. His body travels annually for maintenance to Moscow.
We climbed stairs and wove through corridors to reach the inner sanctum. Four guards were posted at each corner of Ho Chi Minh’s sarcophagus. There was absolute silence as we entered and turned eyes left to observe Ho’s body with its surprisingly natural looking face and hands, lit with soft orange lighting. The famous goatee was perfectly trimmed and he was dressed in peasant fatigues and sandals. The reverence of the visiting countryman for the father of Vietnam’s independence was reflected in their faces. We weren’t allowed to tarry as we made the horseshoe turn around the body.
We exited in the rear of the building and there was an immediate relief from the intensity of the tomb. Suddenly, it was a Sunday afternoon in the park as families and children explored the surrounding gardens and grounds and Ho’s simple home on stilts. 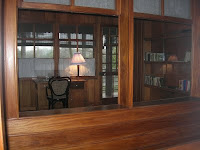 He had no use for the nearby French Colonial Presidential Palace and during the war lived in this country style home. Influential Western and Communist books and writings rested in his library as well as his bulky phone and walking stick. 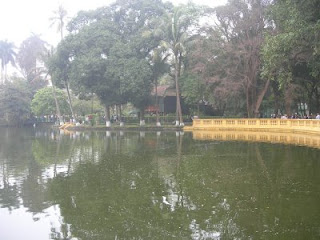 In front of the home was a large carp-filled pond circled by strolling paths and fruit trees from around the world. Nearby, his garage displayed “HoChiMinh’s Used Cars”, a Russian Pobeda and a Peugeot 404 – surprisingly modest cars for the head of a country. As Frances Fitzgerald discussed in his book, “Fire in the Lake”, there was no distinction between Ho’s public and private behavior. He exhibited “correct behavior” or living simply as a peasant, with a sincerity that endeared him to his countrymen. 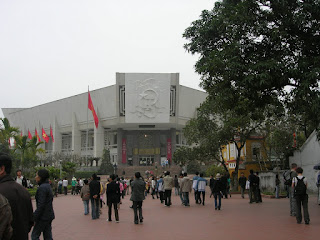 Also on the grounds were an art museum and a history museum, all built in the same bulky, modern architectural style as the mausoleum. It would be easy to spend a day in this cultural park and many Vietnamese were doing just that. After 65 years of colonial rule by France, a 30 year war of Independence, and some difficult years under strict communist rule, the Vietnamese were clearly enjoying the loosening of the government’s reins on the economy and on them.
While the United States does not preserve its leaders for viewing, we have enormous respect for our “founding fathers”. A visit to see our Constitution and Declaration of Independence can require a similar queue. And it is possible to appreciate the commitment of a great leader without agreeing with his philosophy. For these reasons, I found the Ho Chi Minh Mausoleum and grounds more moving than I expected and was glad to have spent a misty Sunday morning with a crowd of Vietnamese as they paid homage to their Uncle Ho. And so, until the next column, remember “Waiting in line with fellow travelers is often part of the experience”.