Tourists in Paris, Texas are often referred to the Eiffel Tower with its jaunty, red cowboy hat or the lovely downtown Italian marble fountain or possibly the statue of Jesus in Cowboy Boots in the Evergreen Cemetery. But tucked here and there are other treasures, some requiring timing but most are readily available. 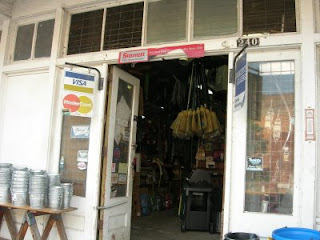 1. Swaim’s Hardware. Swaim’s pulses with anything anyone ever wanted from a hardware store -bolts, wires, pipes, hunting equipment, and ny cooking gear imaginable. Started in 1932 and still at its original location, the store is on its fourth generation of family employees. Old time fire buckets and a car seat from the 1940’s hang from the ceiling and unreachable Radio Flyer wagons and sleds perch from the top of the shelves. Employees may disappear while looking for your request but they always reappear with the product. Stash Dad here while Mom shops downtown on the Plaza.
240 1st SW Street. 903.784.3321 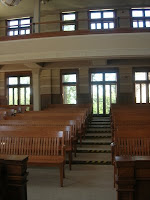 2. The Lamar County Courthouse. They just don’t make them like this anymore. Built in 1917 from the same Texas Pink granite used in the state capital, the courthouse has marble floors and brass chandeliers. Restored in 2005, the district courtroom on the 3rd floor has a 26 foot ceiling and a balcony maintained in its original concrete form. Enter and feel the drama of trials a century ago.
119 North Main. Call County Clerk’s office for hours 903.737.2420 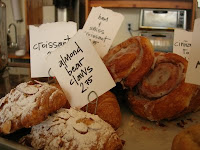 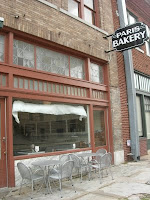 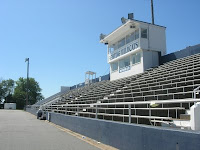 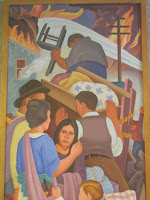 5. The public library can be easily overlooked on a tour of Paris but it shouldn’t be. Inside the Paris Public Library are a set of panels by the well known Texas artist, Jerry Bywaters. The paintings were created as part of the New Deal Post Office Mural Program. A native of Paris, Bywaters rose to prominence as the leader of a group of Texas artists in the 1930s and 1940s who were inspired by the Texas landscape. While you’re at the library, ask to see the wonderful piece by the African-American muralist, John Biggers.
326 S. Main. 903.785.8531 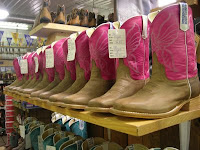 6. When in Texas, dress Texan! At the well-stocked Crazy House Western store, choose your boots from over 6500 pairs of all colors and sizes (try pink for a fashion statement). There’s also western garb for kids and adults, jewelry, and western gifts. Check their map to see if others from your hometown have visited the store. If you’re lucky enough to be here in December, drive through the Christmas light show available at night on the premises.
6655 Lamar Avenue. 903.785.2100 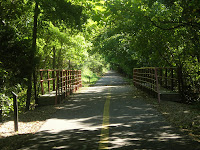 7. Rails to Trails / Trail de Paris. Paris has joined the network of rails to trails with its recent opening of a four mile, paved path that flows through neighborhoods and into deep woods. Early morning joggers or bikers can enjoy a cacophony of songbirds and if lucky, an occasional deer. A tributary off of the main path wanders into a delta of dirt trails for those with an interest in more natural habitats of the area’s birds and animals. It’s a perfect place to unwind at the end of the day.

Enter on Collegiate Street or on 24th street between Jefferson Road and Clarksville Street. 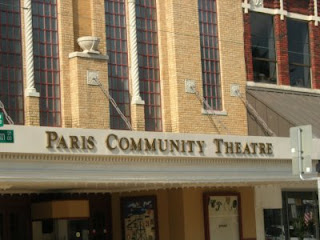 8. Paris Community Theater. If a show is on during your stay, you’re in for a treat. Begun in 1976 by the talented amateurs of Paris, the Paris Community Theater has produced plays and musicals for over 30 years. A children’s theater has also trained young thespians. It all takes place downtown on the square in the renovated Plaza movie theater.
30 N. Plaza. 903.784.0259. Or http://www.paristheatreonline.com/ 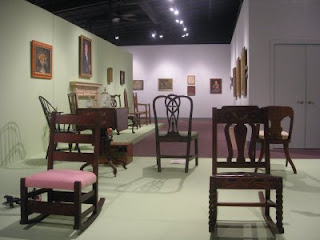 9. Hayden Museum of American Art. What’s a Winsler Homer painting doing in Paris, Texas? And is that really an Ansel Adams photograph? Dr. and Mrs. William Hayden collected American Art for years (before it got so expensive, they say) and have built a private museum for its display. Be prepared for a walk through American art starting with early children’s embroidery and ending with a Robert Rauschenberg. The chair collection is also a treasure.
Call for a tour and hope they’re home. 903.785.1925
10. The Paris Municipal Band. Since 1923, Friday summer evenings in Bywaters park have been filled with the sounds of the oldest municipal band in Texas. Their theme song of “I Love Paris in the Springtime” begins every concert. A July 4th performance in the Paris Junior College stadium draws thousands for the music and the fireworks. Bring a blanket or chair and enjoy the free music.
Bywaters Park is located on South Main Street across from the Library