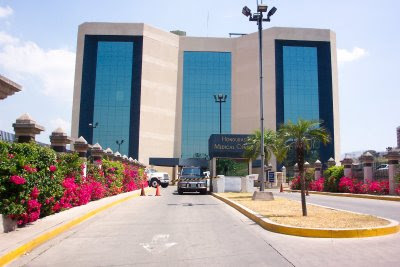 It was not my intent to outsource my medical care to Honduras. Actually, the trip was to visit our niece, a Peace Corps volunteer. The itinerary was well planned with stops in the mountains and the beaches. Hotels and a jeep were reserved. The Copan Mayan ruins had long been a desired destination. My sister-in-law from New York City and our son joined my husband and me and we were ready for the adventure.
Susanna was there to greet us at the airport in Tegucigalpa and to regale us with her stories of life in the Peace Corps. She casually described the weirdness she lived with every day, including the damage machete knives can do to sugar cane and people. Gently, we changed the subject to food. 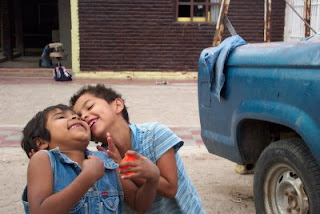 The next day, we drove to Susanna’s small town of Villa de San Antonio. She led us on a walking tour and introduced the workers at the town orphanage. Several Europeans volunteers were working with these beautiful children. We also explored the teen center where Susanna worked.
The tour ended at a friend’s home who was celebrating a birthday that evening. The house was bursting with people and food but I wasn’t hungry. Early in the evening, I excused myself to return to Susannah’s house. It was then my physician husband knew something was wrong. His exam and questions led to only one diagnosis – I had appendicitis. It was 9 p.m. and we were in a small village in Honduras.
An interesting discussion ensued on the next step. Susanna called the Peace Corps which had two suggestions. In a nearby town, there were Cuban doctors and a small hospital. Cuba has well trained physicians which they have shared throughout Central America and you are considered fortunate to have one. The other suggestion was to return to the capital, Tegucigalpa We hesitated. ALL of our guide books and EVERY person we talked to echoed the same mantra, DO NOT DRIVE IN HONDURAS AT NIGHT. Bandits were known to appear suddenly. We decided to take the chance and entered the dark road to the capital.
The good news is that everyone there avoids driving at night and no one was on the road except an occasional cow. We arrived in Tegucigalpa in record time with no idea where the recommended hospital was. And there are literally no street signs. A taxi had paused at a service station and we stopped to ask his assistance. He agreed to lead us to the hospital. (Susanna tried to bargain the price with him until we told her we could spring for the 50 cents she was trying to save us!) Off we sped to the “Honduran Medical Center”, a lovely, clean, modern hospital with an armed guard at its entrance and no one in its emergency room. Soon Dr. Herbert Lopez arrived in his leather jacket, clearly surprised to have me as a patient. “Que barbaridad” was his response to my situation. Two hours later, the surgery began with two surgeons and an anesthesiologist. I woke up in my own private room without an appendix but with a relieved husband at my side.
If Spanish weren’t being spoken, it could have been a room in any modern American hospital. The cable TV carried the Mavericks game. 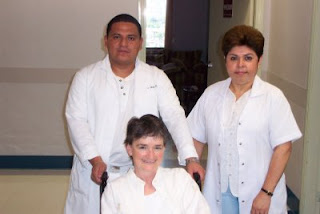 When a male nurse entered, he stopped to comment on the still unfortunate trade of Steve Nash by the Mavericks and admitted that his favorite team was the Boston Celtics. There were some quirks. The phone rang with calls from strangers asking for certain patient’s rooms. Some were not too friendly as I explained I was a patient, too, and had no idea where their patient was. Now, I was indeed fortunate to have a Spanish speaking physician husband, especially on some of the recovery decisions. But the doctors and hospital staff provided very considerate care. Dr. Lopez even offered to write a letter confirming I needed four weeks to recover.
The trip was, obviously, cut short. After a couple of days recovering at Leslie’s Place, a pleasant bed and breakfast, we returned home. http://www.dormir.com/But there were some positives. My sister-in-law swears she was saved from dengue fever since we never had to spend the night in rural Honduras. AND the hospital accepted Blue Cross/Blue Shield insurance. They should have been happy to pay the bill. Compared to U.S. prices, the company saved at least $3,000. But the Copan Mayan ruins remain unseen and we’ll just have to try again. So, until the next column, remember to always carry your insurance card!