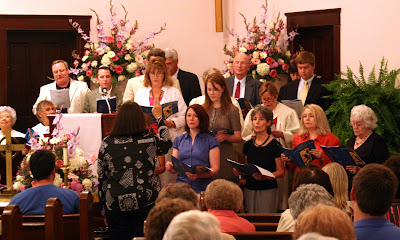 The First Presbyterian Church of Clarksville is 175 years old this year, earning the honor of being the oldest continuously operating Protestant church in Texas. A celebration was in order and I traveled to Clarksville in June to attend its anniversary choral service. The combined Presbyterian and Methodist choirs performed with smiles and great energy. But inserted into the middle of the program was a performance by the “Marable Family Chorus”, a name that invited comparison to the Von Trapp Family singers from “The Sound of Music” . When it was their time to sing, the chorus emptied the right one-fourth of the church and moved forward. Five generations stacked themselves before the crowd and leisurely sang “In the Garden” a cappella with eight part harmony. As their director said afterwards, ” We often get so captured listening to ourselves, we slow down.”
I was curious to know what induced this family to journey from all parts to Clarksville for the anniversary. It turns out they have sung in East Texas for a very long time. Their ancestor, Sam Corley, was known as the “Sweet Singer of Israel” and was the first Presbyterian minister in Clarksville. He died in a Civil War battle in 1863 but his oldest son, A.P. Corley, raised his children in Clarksville. The Corley Chapel at the church is dedicated to Sam Corley. The last of his descendants still living in Clarksville died in 2004.
The participants in the anniversary chorus were primarily descendants of A.P. Corley’s daughter, Mattie Corley and her husband, F.F. Marable – hence the name “Marable Family Chorus” . From this pair and their seven children came generations of singers, performers, musicians, speakers, writers, and hams. Their daughter, Ruth Marable, (Miss Ruth) studied under Fred Waring and generously used his arrangements with her choir students at Clarksville High School. She was a known taskmaster but fair and fun. Her speech students learned the hard way that the word, ‘think’, is not pronounced ‘thank’. And she had advice for other choral directors, “always dress from the back” and “always leave them wanting more.”
Ruth’s brother, Paul, played the mandolin. Their sister, Mary, who was known to have ‘played the piano on the radio’, accompanied her siblings as they sang at countless funerals and other performances. At home, the brothers would beg the sisters to sing at the Christmas gathering. Acting and singing “Knock and the Door Will Open” brought smiles of contentment. Since small town culture often rests in church choirs and school plays, Clarksville’s patrons of the arts were the Marables, donating talent where needed.
Though not residents of Red River County, the next generations of cousins continued to gather in Clarksville for summer and Christmas vacations through the 1950’s and 1960’s. As one cousin reflected, they would do anything to get to Clarksville for Christmas. A new play was penned each year to be performed by the cousins for the family and neighbors. Chairs were borrowed from Jolly Funeral Home to accommodate the crowd at the house. And at midnight on Christmas Eve, they always caroled (in harmony) with “Silent Night” as the favorite.
Interestingly, there were no music lessons, no formal voice training and no assignment of parts. Children harmonized by simply singing the same part of the person next to them – the classic learning by example. They were often short of tenors and some of the women would pick up the first tenor part. If asked about favorites, family members will hum a few bars of a spiritual to be sure you know the piece. The chorus continues to sing “Let Me Call You Sweetheart” directly to the bride at every family wedding. And if you’re fortunate, brothers Sparky and Allen will play “Way Down upon the Sewanee River” on their cheeks.
The family also takes pride in telling and retelling stories. The story belongs to the person who tells it best. Great Aunt Susie’s dog, Trubador, marched with the Clarksville High School band and bayed at funerals – rich fodder for the raconteurs. F.F. Marable, Jr.’s act of preaching at his own funeral was famous and began with “had I known the price of flowers were so high, I wouldn’t have died at this particular time.”
So, there they were in Clarksville, Texas, on a hot, summer Sunday afternoon. Members had traveled from Austin, Waco, Dallas, Buda, San Antonio, and Springfield, Missouri, to gather once more in the family church. None of them would claim to be professional musicians, but they recognized music and laughter had kept their family together for generations. And each of them felt the need to pay homage to their ancestors where it all started – First Presbyterian Church of Clarksville. The Sweet Singer of Israel would be proud. And, so , until the next column, remember “Austria’s not the only country with singing families”.

One Response to “The Marable Family Chorus”