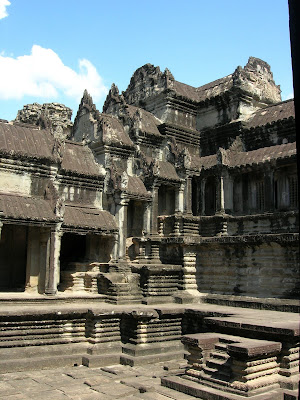 Bhong was at the hotel early, waiting for us. It was still dark and surprisingly cool for a jungle morning. I was traveling with Paris friends, David Kennemer and Sharon Schneider. An elderly woman was already selling her fresh baked french baguettes on the street. We happily spent 75 cents to purchase three as we climbed into Bhong’s rented “tuk-tuk”, a motorcycle that pulls a two wheeled, modern day surrey without the fringe on top. Off we sped through Siem Reap and into the countryside where we passed the Cambodians walking, biking, and riding motorcycles to work. A quick stop at the Angkor Wat gate gave us a three day pass complete with our photos. The sun was rising as we arrived, the very first tourists that day. 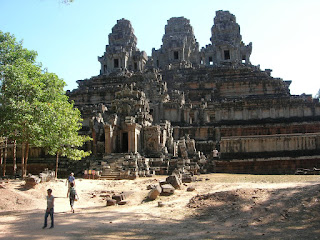 The Temples of Angkor are the Kingdom of Cambodia’s number one tourist attraction. 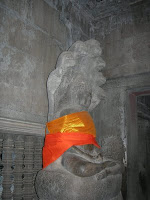 The temples were built from about 950 to 1220 A.D. by a series of Cambodian kings. During the centuries of construction, the emphasis was on the king as god, who resides in the temple after death as an intermediary between man and god. Each of the temples are constructed as a microcosm of the world, the temple as the central holy mountain, surrounded by a moat or ocean. The bridge was the rainbow connecting men and gods. The earlier temples centered on the Hindu Siva but as Buddhism spread, the later temples used Buddha representations. Even today, there are still Buddha statutes (covered by orange silks) attended by male and female Buddhist monks who will pray for your good luck when you purchase and light incense.

The surprise was the size of the complex at Angkor. It is an enormous park with temples spread over 40 miles . Transportation is required and you have choices – bicycles, motorcycles, tuk-tuks, cars, buses, minivans, and even elephants. Most tourists were on tours and were motored about in buses. 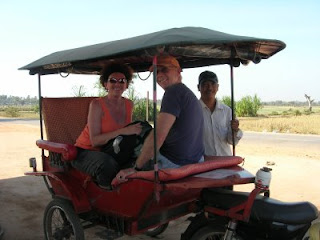 We had hired Bhong and his tuk-tuk for three days. He was very attentive and eager. To pick us up close to a temple’s entrance, Bhong had to pay “extra” to the guards to park nearby.
Our schedule was to first visit the more popular temples such as the Bayon before the crowds arrived. We then paused for a breakfast at stall number “16”, one of many open air restaurants available. But this one was owned by Bhong’s mother-in-law (or so he said). The menu included slightly altered favorites such as pineapple pancakes but also offered fried rice with ginger and vegetables and topped with an omelette. Only the coffee was undrinkable. Next were visits to some of the smaller, out of the way temples that didn’t have lines of buses waiting in front. It was common as we approached a temple to hear live music played by a band of paraplegics, victims of land mines still scattered from Cambodia’s recent war past. 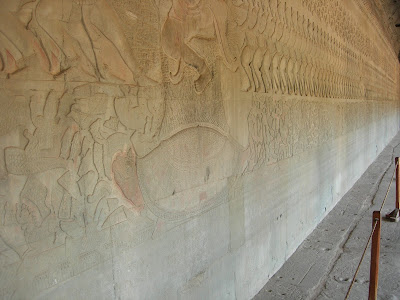 Each temple enjoys its own aura. The actual Angkor Wat temple has a working moat around it and is almost perfectly restored with lovely bas relief carvings of battle stories of demons and goddesses in the sea. 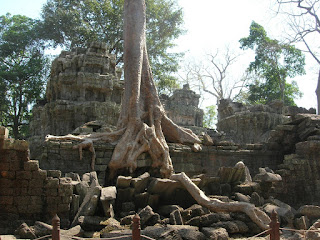 Other temples such as Ta Prohm are maintained in their discovered form with spung tree roots growing through rooms and roofs. 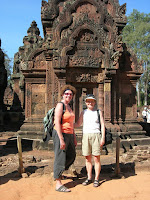 The rose colored Banteai Srei demurely reveals the most delicate sandstone carvings, perhaps a reflection of a queen’s influence. 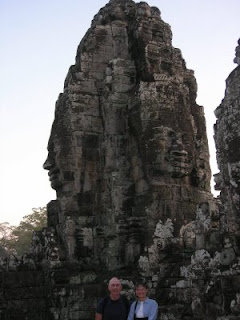 But the most enigmatic and spiritual temple was the Bayon.
Unless prepared, the enormous smiles from the ten foot high Buddha faces peering down from 54 towers may shock you. As you wander, the faces become your companions and you wished they could tell their stories of the processions of kings and elephants and acrobats that paraded by in celebration of battle victories.
By 2 p.m., the heat was too great and we would return to the Bequest Hotel where we had the option of hiring a blind masseuse. (We declined but found the idea intriguing.) The evenings were spent on Bar street, an Asian Bourbon street scene, where you could dine al fresco at the Temple Club, Lucky Sian or Angkor Burgers. The Red Piano was our favorite restaurant as it had been for Angelina Jolie when she filmed “Tomb Raider”. For seven dollars, we had a taste of the colonial era with drinks, a meal, bamboo chairs, overhead fans and friendly geikos climbing up the nearby walls.
On the third day, we ended our time at the ruins of Angkor with a late stop at the Bayon and a last look at the moon faces. These were the visages of Cambodia’s past time of glory. After a devastating internal war in which at least one fourth of the population died, Cambodia is recovering and using its past to support the future. Bhong’s face is that of the new Cambodian – hard working, solicitous to please, and desperately hoping to earn enough to buy his own tuk-tuk. I would like to think we contributed to that goal. So, until the next column, remember tourism is a powerful industry for developing countries.