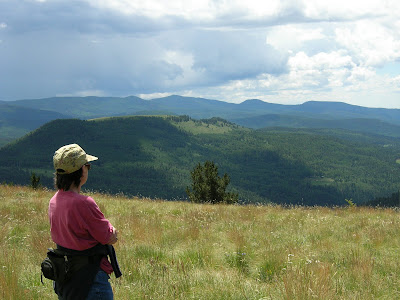 “The Cabin”, as it was always referred to, was one of the first time shares. My father and some of his friends built it in 1956 as a hunting cabin in Cowles, New Mexico, one and a half hours northeast of Santa Fe. They dubbed it ” Plainview”, named for their hometown and for its open location in a mountain meadow. A classic log cabin, it originally was just a large room and a kitchen with a scary outhouse up the hill. When the families of the hunters started coming for annual summer trips, a bedroom and bathroom were added. Our next door neighbor was the Pecos Wilderness and the Santa Fe ski area was just over the mountain. All of the summer homes in this area were constructed on a 99 year lease from the National Park Service. 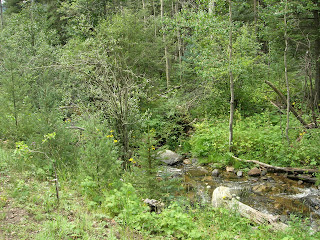 Across from the cabin is Winsor creek, a part of the headwaters of the Pecos River which eventually flows into Texas. Wildflowers line the banks and are wonderful to gather, being careful of the nettles. As kids we would occasionally fish off the bridges for the rainbow, brown or cutthroat trout. But we spent far more time dropping sticks and flowers on one side of the bridge and racing to the other to watch them float by on the other side. When I was growing up, Cowles was actually a little community with Mountain View Lodge, a bar and restaurant, dance hall, and horse stables. We could rent horses for the day, ride them (without guides) to the cabin and literally tie them up at the porch. Those amenities are all gone. Only Los Pinos, a small dude ranch, remains as well as ample camping areas. http://www.lospinosranch.com/ 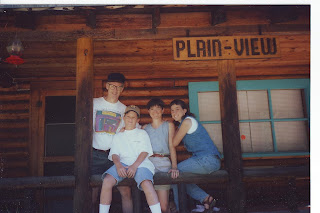 After a 20 year break, I started going back to The Cabin with my husband and children. The road from Pecos was now paved but still passed by the wooden planked Tererro General Store, a staple since 1940. http://www.pecoswilderness.com/
The high country air, suffused with the aroma of Ponderosa pine, spruce, fir and aspen, was as clean and wonderful as ever. The cabin itself seemed smaller and the trees larger than I remembered. There was still no television or telephone but plenty of mice. Feeders placed on the porch continued to attract droves of hummingbirds who would helicopter in, occasionally landing on a patiently waiting finger.
Our new emphasis at this stage was on hiking. I had never really explored the Pecos Wilderness on foot. http://www.fs.fed.us/r3/sfe/recreation/wilderness.htm It was designated a wilderness in The Wilderness Act of 1964. 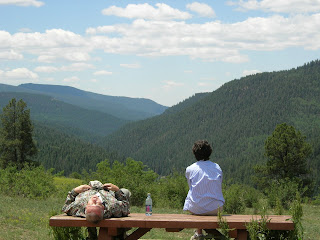 With 15 aspen lakes and 150 miles of streams, it is full of wonderful trails that climb steeply to ridges or meander up valleys to waterfalls.

Day hikes are our favorite. Hamilton Mesa and Winsor Ridge Trails offer the best views that can easily be had with a packed lunch. The Jack’s Creek trailhead is equestrian friendly with corrals for the packtrips and hunters. Actually, the picnic tables at Jack’s Creek provide a 360 degree look at the snow covered Truchas Peak and Pecos Baldy with a safe view of late afternoon summer thunderstorms entering the Pecos River valley. You can always jump in the car when the storm finally arrives.
Once we attempted to backpack in for an overnight stay with our kids and the Swasko family. A brush with a mountain lion considerably shortened the goal of Stewart Lake. We did spend the night out but in a meadow directly above our cabin rather than miles up the mountains. We didn’t really need the second tent we carried as all four members of our family slept in the same two man tent. When we told the forest rangers about the mountain lion sighting, they were excited – not exactly the reaction we had! 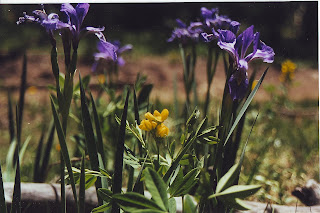 The joy of returning many times to the same vacation spot comes from the familiarity and comfort of knowing your surroundings and the anticipation of discovering something new each year. We realized the flora of the cabin area completely changed after visiting in June rather than our usual August trip. Mountain irises only appear at that time of the year and snow remains on the high paths. The trails at Holy Ghost Canyon (what a wonderful name) were most recently tried for the first time with our friend, A.W. Clem. And we were thrilled to spot Rocky Mountain Bighorn Sheep at Pecos Baldy Lake on a backpacking trip with local Paris guide, Bob Bush.
Yet with all those fabulous surroundings, the very best memories came from the night time, inside the cabin, after we ate dinner around the faded kitchen table. We acted out charades, played poker into the night and told stories in front of the fireplace. Common pleasures were somehow made even more satisfying when surrounded by the dark, silent forest and the star spangled heavens. So, until the next column, remember, “memories can be built from the simplest of vacations.”

2 Responses to ““The Cabin” , Cowles, and the Pecos Wilderness”