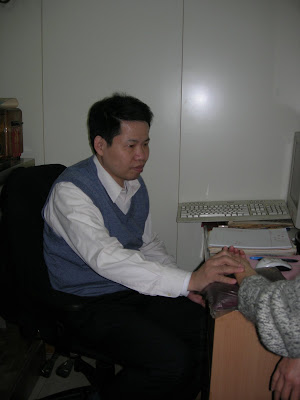 Acupuncture began in China in the Stone Age when sharp edged stones were used to treat disease. It developed into a complex system to diagnosis, treat, and prevent illness with the overall goal of restoring balance and harmony to the body. Acupuncture can relieve pain (even during surgery), treat chronic conditions and strengthen the immune system. It was suppressed after 1911 when Western Medicine was introduced. Chairman Mao Zedong was a believer and in 1950 Traditional Chinese Medicine and Acupuncture again were taught in medical school with Western Medicine.
On a recent trip to Hong Kong, it seemed the time to try this four thousand year old tradition. I was with Betty Swasko and Tina Smith. Tina’s daughter, a resident of Hong Kong, introduced a friend who regularly used an acupuncturist and who agreed to take us. Ceni’s doctor was Dr. Tsai Chang Yi whose official titles were Herb Doctor & Acupuncturist and Registered Chinese Medicine Practitioner. The latter profession allows him to write prescriptions for herbal teas to be used in conjunction with the acupuncture treatment. Dr. Chang’s father practiced in the same office for many years and his brother teaches acupuncture at the University of Hong Kong Medical School. He had an opportunity to move to a wealthier part of town, but he chose to remain at the family office where he could also serve the poor. His reputation for helping women who want to conceive was impressive but not something this group was going to ask about.
Located in an apartment building, Dr. Chang’s office was clean and welcoming but well used. He and his wife and mother greeted us with big smiles as we entered. Dr. Chang sat behind a computer with a chair beside his desk for the patients. He seemed a bit surprised to see us but listened carefully as Ceni explained who we were. He had somewhat different questions for each of us. Do you have energy? Do you sleep well? What year were you born? He checked our pulses and looked at our tongues. Betty complained of her planter faciatis and Tina was cold. I couldn’t really come up with a specific complaint other than lack of sleep due to the time change.
We were told that Betty was healthy but Tina and I had bad chi or energy! Other advice included avoid salads, eat more soups, flavor stir fry with ginger to help with digestion and put dried orange peel in soup for flavor. Betty was also told to eat more rice. 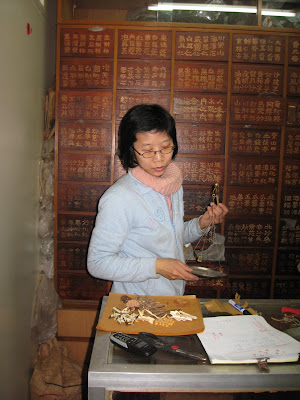 As he analyzed our answers and his findings, Dr. Chang wrote a prescription for each of us and handed it to his wife, who acted as the herb pharmacist. She held a set of hand scales and began pulling out various herbs, roots, berries, and some unidentifiable earthy things. 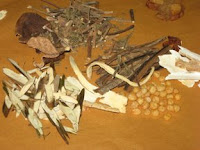 Each was carefully weighed and placed in a sheet of torn butcher paper. When the prescription was filled, she took it to Dr. Chang’s mother in the adjacent kitchen who was to make tea from these items.
It was now time for the acupuncture. We were placed on individual, elevated beds. The sheets appeared quite clean but there were distinct round burned holes on each of them. Dr. Chang arrived and asked if we were nervous. Truthfully, yes. He just smiled and proceeded to apply the slender, spaghetti like needles to our feet, lower legs, neck, and behind the ears. There was just a slight prick as the needles were placed. Tina also had a metal box placed on her stomach filled with what appeared to be burning charcoal! That will teach her to complain about being cold. It may also explain the burned holes on the sheets. We were instructed to lie still for 30 minutes. The time passed quickly. When Dr. Change removed the needles, Betty felt immediate relief in her feet, the tenseness in my neck and upper back was better, and Tina was warmer.
When we all finished and paid our $25, we were handed our individually brewed teas in large to go cups. Dr. Chang warned us not to drink the tea until we had eaten. At lunch, I tried sipping the tea but it tasted awful and the only way to drink it all was to take gulps. There were no immediate, noticeable results from our prescriptions. That night, however, I became a believer. No, I didn’t sleep better but I was purged. I’m not sure what to blame it on but no one else had that experience. Only our teas were different.
Acupuncture is widely available in the United States and is beginning to be covered by insurance as it is in Hong Kong. There are 8000 acupuncturists and 16 acupuncture schools in America. We all agreed we would try it again, especially if we had specific complaints. But the next experience won’t be same without the benevolent Dr. Chang and his gentle wife and mother. So, until the next column, remember “eat more soup and less salad”.