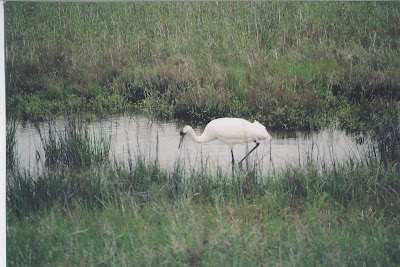 We were up before daylight and at The Skimmer boat by dawn. Most passengers arrived with coffee in hand. The real birders also had their extensive equipment – Swarovski binoculars harnessed to their backs, cameras with large extended zoom lenses, tripods, bird books, and bird journals. There were accents from around the world, Canada, Germany, Japan. This was a serious international birdwatching crowd and some birder groupies like us brought together in Fulton-Rockport, Texas to see the wintering whooping cranes. It was March and the cranes had been here since November. The migration back north had just begun. Our skipper, Tommy Moore, felt sure we would see the big birds and many other bird species. He was right. 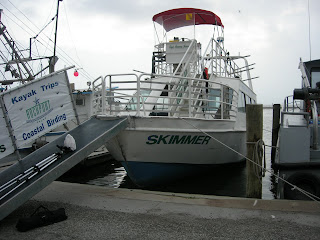 Heavy winds accompanied us as we motored to the Intercoastal Canal. It took some time to arrive at the channel islands, along the edge of The Aransas National Wildlife Refuge Complex. A sudden stop at a shallow bay moved the crowd to the port side of the boat. “Ring billed gulls at 12 o’clock” shouted the Skipper in familiar birding language. Soon more names were called out, almost too many to take in. I’m always astounded at birders’ ability to distinguish and identify birds that to my eye are simply white or brown or spotted. Birds’ flying shapes, size, crests, beaks, and color all help a trained eye determine the variety in a flock of birds. It’s entertaining when the experts disagree and have to start pointing out the nuances of a red spot under the beak or the shade of feathers to support their claim. Obviously, Skipper Moore had a very experienced eye and wasn’t to be challenged.
Soon we saw them in the distance, mother, father and baby crane. 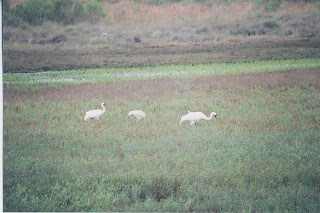 We could actually see three groups of three cranes each. The official number of Whooping Cranes for 2008 in Texas was 266, a number to celebrate since there were only 15 of them in 1940. Their numbers were severely depleted from loss of habitat and hunting. It wasn’t until the Endangered Species Act of 1973 was passed that the whooping crane population began to recover. The previous establishment of the Aransas National Wildlife Refuge in 1937 was to protect the crane’s last wintering ground. And in 1993, a non-migratory flock was introduced in central Florida. They had to be taught to migrate from Florida to Wisconsin by use of ultralight planes! But gradually these efforts are being rewarded.
Whooping Cranes are family oriented. They like time together and forage for large blue crabs separately from other families. They raise one baby at a time even though they may lay more eggs. Because of the fragility of their species, the forest service has snatched eggs and sent them to Wisconsin to roost with the other large group of whooping cranes. From our distant location, it was hard to appreciate the birds size until they flew. At five feet tall and a seven foot wing span, they’re the basketball players of the bird world. It looked as if their lumbering take-off would not succeed but the slow, graceful flaps gradually lifted them above us. What a thrill to see an endangered species casually move away.
After this experience, the numbers of bird sightings grew exponentially. My favorite was Manhattan Island. That wasn’t its real name but the tiny islet served a very large population of birds who clearly liked company. Each species claimed a neighborhood and there wasn’t much crossing of turf borders. We saw oystercatchers, great egrets, tri-colored herons, and great blue herons. On a nearby sandbar was a flock of Roseate Spoonbills, those wonderful pink birds that even I can identify.
The clouds began to threaten and Skipper Moore turned windward to return to port. But even in the rain that soon arrived, the die hard birdwatchers were still on deck claiming more lifetime birds for their journals. 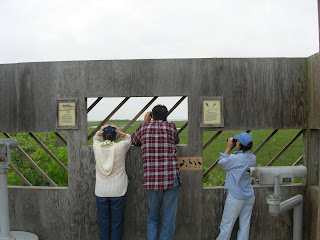 My husband entered 39 birds in his very new bird diary, some with fun names like Laughing Gull, Bufflehead, and Scissor Tail Flycatcher. Our crane watch continued at the Aransas National Wildlife Refuge, a 115,000 acre complex where blinds are available to spy on any bird. We also came across alligators near the trails as well as wild turkeys and a very vocal bull frog. 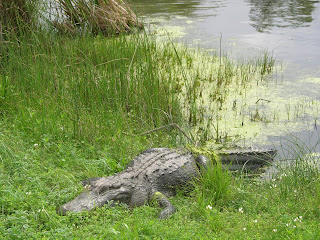 It’s hard to know when to time your visit to Fulton-Rockport. If you miss the whopping cranes, you can catch the migrating birds from across the Gulf of Mexico who arrive in May or enjoy the hummingbirds who pass this way in September on their way back across the gulf. Anytime you go, you’ll enjoy meeting birders from around the world who appreciate all that’s been done to save the whooping cranes. So, until the next column, remember “birds and birders know no borders”.
References
Aransas National Wildlife Refuge, http://www.fws.gov/southwest/REFUGES/texas/aransas/ , 361.286.3559
The Skimmer Boat, http://www.rockportadventures.com/rpa/, 877.892.4737
The Inn at Fulton Harbor – directly across the street from the Fulton Harbor where the Skimmer Boat docks. http://www.innatfultonharbor.com, 866.301.5111
Restaurants within walking distance – Hu-Dat (Vietnamese and Oriental), Moon Dog Seaside Eatery, Charlotte Plummer’s Seafare Restaurant