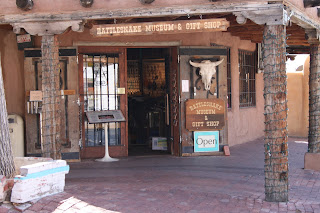 Albuquerque is a desert city influenced by science and Pueblo Indian culture. So it’s no surprise to find these unique characteristics represented by three offbeat museums. I convinced my sister-in-law and my reluctant mother that visiting them would be a fun way to spend a cold winter day.
The Rattlesnake Museum is a compact display of real snakes, facts and myths of our slithering friends, and a surprising collection of snake art. It has the “largest collection of different species of live rattlesnakes in the world.” Located in the back of what appears to be one more gift store in Old Town, you must walk apprehensively through a set of swinging doors with a big sign “DO NOT TAP ON THE GLASS”. Inside is a large collection of beautiful snakes. The names such as Red Diamond Back, Timber, and Mottled Rock, prepare you for their desert shaded scales but not for locating them in their glass fronted homes. I thought more than one was missing until more patient observation noted them.
Bob Myers, owner of the museum, playfully encourages you to love these reptiles (or at least change your attitude). A quiz at the beginning punctures some common myths. Rattlesnakes are shy and just want you to keep walking. They are actually deaf but can feel vibrations and detect odors by their tongues. And if you do arouse a rattlesnake, their venom is “comparatively” weak, meaning you have little chance of dying (a fact ignored by Hollywood). At the end of the tour you’re treated to a display of snakes in art such as a Remington statue of a horse and snake, an Audubon picture of a rattlesnake in a mockingbird’s nest, a rattlesnake decorated slot machine, and comics by Gary Larson with his snake impersonations of human behavior. We earned the “Certificate of Bravery” handed out at the end but the woman behind us who screamed at seeing a caged tarantula should have been denied one. 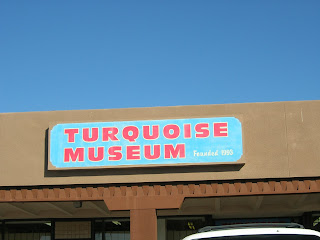 The Museum of Turquoise is only 15 years old, surprising considering the long held association of Native Americans in New Mexico with turquoise jewelry. The museum’s collection is from the J.C. and Lillian Zachary Jr. family whose daughter and son-in-law founded the museum. We learned the word turquoise derives from the French word for Turkish where the French first thought the stone originated. It didn’t but the name stuck. It is the first gemstone ever mined by mankind. Five thousand year old turquoise jewelry was found in Egyptian tombs.
Turquoise stones come in three colors – white, green, and blue. American Southwest mines used to produce significant stones, but now less than thirty mines are still operating. If you are a true collector, you know which mine produces the most beautiful stones. But here’s the shocking truth – 80 % of turquoise stones used in jewelry today are from (sigh) China! There are natural stones and stabilized stones. White turquoise is too soft to work with and is stabilized by injecting liquid plastic into the stone, which brightens the surface and hardens the substance. Most stones are waxed, oiled and lacquered. Only 10% of the stones used in turquoise jewelry are natural stones.
We were warned to be sure that jewelry purchased had real turquoise stones and not just stones of the turquoise color. But I liked the fact that turquoise is being mined out and can only go up in value – a very decent reason to buy more “real” turquoise jewelry. 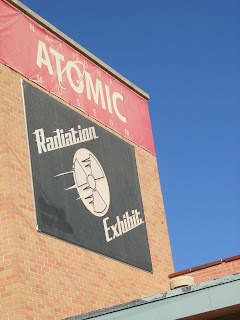 And, finally, we arrived at the National Atomic Museum, “the nation’s only museum for nuclear science”, as it announced at the front door. I’m not a scientist but I can appreciate the advances of science and nuclear science is one of the young kids on the block. Even though X-rays were discovered in 1895, the first nuclear device was not exploded until July 1945, just down the interstate from Albuquerque. Nuclear power plants were an early peaceful use of nuclear energy. The Europeans have been all over that source, especially France. The French gets 78% of their electricity from nuclear power and in fact, France exports electricity. In comparison, our nuclear plants provide 20.8% of our electrical needs (coal is the number one provider). We also learned (I really should say I learned since my mother decided to sit out this museum!) that nuclear waste can now be reused, which may encourage more plants to be built in the U.S. 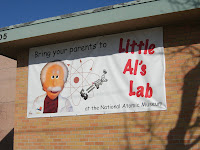