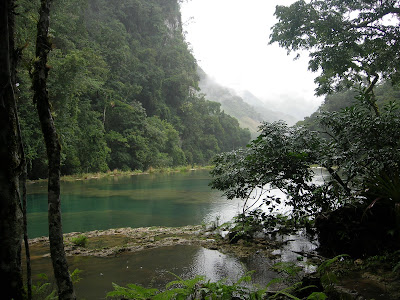 The name was so exotic – Semuc Champey, the loveliest spot in Guatemala. It was nature at its finest, a natural water park. The question was how anyone ever found it. Along a winding road from Guatemala City to Coban my son and I went 3 1/2 hours, continuing on for over an hour to the turnoff where the sign promised only 22 more kilometers (13.2 miles). Soon to be there, right? No, this road turned ugly. It was uneven and rocky and the pick-up truck listed back and forth as it maneuvered up and down the mountains, often requiring first gear. One and a half hours later, we arrived at the end of the road. (I didn’t add in the time when we had to turn around because our driver forgot to get gas nor the extra time it took to deliver a rope to his cousin.) 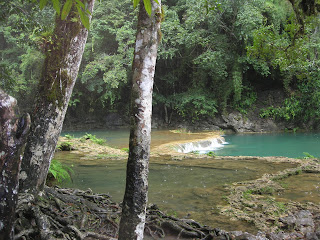 The good news is it’s worth it – vale la pena. At Semuc Champey, the thundering Cahabon river disappears under ground. Above it are gently layered pools of clear, jade colored water for swimming and wading, all located in a lush area of mountains with green, green, ferns, flowers, and pine trees. It was raining hard when we first arrived. As it shifted to a light rain, we went out – the only ones swimming. Everyone else was huddled under shelter. It was easy to make our way from pool to pool. The sun soon emerged, lighting up the pools and bringing in the crowds. There was a balance of Guatemalans and foreigners visiting the site, clearly distinguishable by shade and dress. 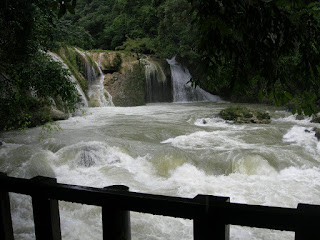 Below the pools, the river emerges with a roar, causing some grand falls which we observed from below.
The second part of the day was a cave tour across the river at Kan’ Ba. As usual, we had to sign in and I noted that five of the last seven registrants were Israelis. It is a custom for young Israelis to take a year off for travel after serving their “sherut tzvai’l” or mandatory time in the military. They are adventurous travelers and we saw many of them.
Truthfully, I had been anxious about the cave tour since the morning. We knew what to expect from previous participants. An indigenous guide would give you a candle as you enter the water at the base of the cave. You would wade at first, but then swimming was required! After registering, I was reassured to meet our guide, Israel, a small, wiry, man with a huge, beautiful smile, reminiscent of Xi, the bushman in the movie, “The Gods Must be Crazy”. There were only two of us on the tour. In the dark of the cave, we would have three candles and a weak battery powered flashlight around Israel’s head. As we started, I was having serious questions about the wisdom of this adventure but I was still a mother and I couldn’t let my son go in there alone, even if he was twenty-four years old.
The water was cool, not cold. I was already breathing hard as we began to swim against a strong current flowing towards the cave opening while trying to keep the candle dry. There were stalactites to grab here and there. Israel stopped occasionally, pointing out various patterns with his headlight. It was hard to appreciate the different formations when all I could concentrate on was water rushing by, exiting in unknown places. The rains had been very heavy, preventing us from crawling out of the cave for a view of the waterfalls above us. Instead, we spent more time inside, climbing up to some dry caverns. When we finally turned around, it was wonderful to be flowing with the current. At one point, we had to direct our heads between two stalactites almost caressing the water with two feet of clearance between water and cave. Daylight never looked so good. 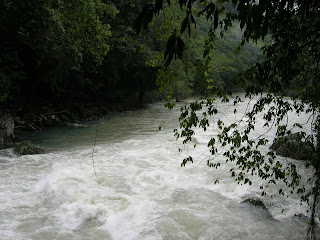 But Israel was not through with us. The tour also provided innertubes for a river float. Because of the rainy season, the river was on the run, making it more of a river dash. We hooked up our tubes, my feet under my son’s arms, and Israel’s small feet under my arms, putting in just below the falls. Floating along with waterfalls and mountains around us, children waving from the banks, and an occasional rapid was way beyond what Disney could ever provide. I was sorry when this part ended.
As with all adventures, it felt good to be done. If the cave tour had been in the U.S., I’m sure life jackets and better lighting would have been required. But many countries of the world let you access and assume the risk of your chosen undertaking without worry of a lawsuit. As an attorney, that’s bothersome. As a participant, it is exhilarating. So, until the next column, remember ‘always pack your swimsuit and some extra courage.’
Suggestions:
Semuc Champey – Two hour drive from Coban, Guatemala. Their web site, http://www.semucchampey.com, has lovely pictures.
Aventuras Turisticas has reasonable tours – http://www.aventurasturisticas.com.
Kan’ Ba Caves – located immediately downriver from Semuc Champey.
Hotel La Posada in Coban – a private residence that became a hotel in 1939. 1a calle 4-12, zona 2, 502-7952-1495;http://www.laposadacoban.com
Casa D’Acuna – wonderful restaurant and home of the best waiter in Guatemala – extensive menu. (It’s also a budget hotel.) 4a Calle 3-11 Zona 2, 502-7951-0482