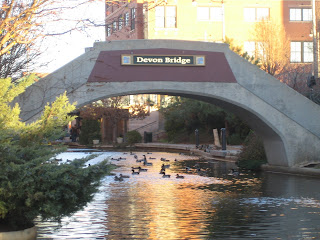 How is it possible that a life-long resident of Texas (which borders Oklahoma a good distance) and a current resident of Paris, Texas (which is only 20 miles from Oklahoma) had never been to Oklahoma City? It was too far north or too far west and really wasn’t on the way to anywhere for us until our daughter and son-in-law moved there. It was time.
First – the drive. How different than the drive to Dallas. Head straight north up the Indian turnpike, through the Ouachita mountains, take a left on Interstate 40, cruise through more rolling hills with open fields and ponds, and take in a few (large) Indian Casinos on the way. Other than slowing to pay tolls, you could make that drive in just over three hours without releasing your cruise control or spotting a Starbucks.
The expressways of OK City are elevated with high curving arches as the interstates meet and part in the wide open sky. Below the exchange, downtown is divided into three parts. 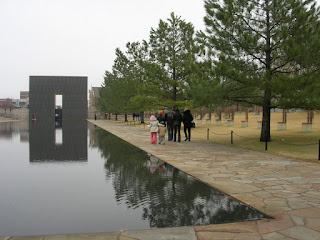 The arts district is an architectural history lesson with a modern art museum and an Art Deco musical hall. Included in this area is the Oklahoma City National Memorial, the chilling and yet soothing testament to the 1995 bombing of the Alfred Munch Federal Building. Midtown has the renovated Skirvin Hilton and other major hotels, several bank buildings, the Cox Civic Center and the Ford Center where their hockey and basketball teams play. 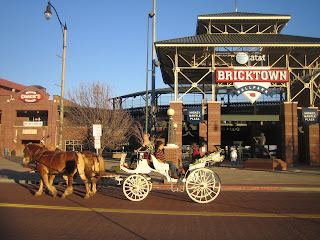 The third district, Bricktown, was originally a compact, commercial center with red brick warehouses and store fronts. It declined after the Great Depression and was not revitalized until the 1990s. Someone had vision. Bricktown is now a lively cross between the San Antonio river walk and downtown Ft. Worth complete with historical buildings and a new section that has captured many national restaurants and stores. There’s even a Bricktown baseball park for the AAA Oklahoma Red Hawks. The river walk is particularly charming in the evening with restaurants spilling out onto sidewalks and boats motoring by. 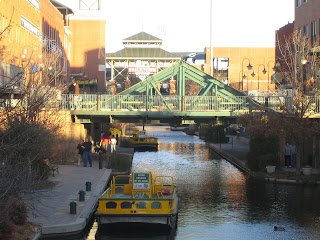 Oklahoma City became even more interesting as we ventured out of downtown. It’s no surprise the National Cowboy and Western Heritage Museum resides here. They were having a special western day when we arrived, complete with cowboy greeters on horseback and gifts of red and white bandanas. A statue of John Wayne was to be dedicated that day. After an unsuccessful try at roping a saddle, we moved on to our biggest surprise, Little Saigon. 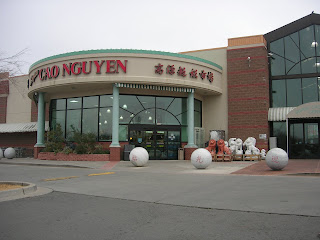 The large Asia District in Oklahoma City branches out from 23rd street. Asians are three percent of the OK City population, most of them Vietnamese who originally came after the fall of Saigon in 1975. When my daughter told me there was a Vietnamese grocery store near her, I expected a 7-11 type store. The large Super Cao Nguyen was named for the Central Highland area of Vietnam. It has been owned by the Luong family for over 25 years. Many of the fruit and vegetables of southeast Asia were available such as durian and jicama. It also had pig and duck as well as some of Asia’s more common gift items. They have recently begun to attract the Whole Foods crowd by carrying European specialties such as Greek olives.
There was a special program in the store’s parking lot that morning. One of the boats that had been used to escape Vietnam in the 70’s was making a tour of the United States along with black and white photos of the refugee camps in Thailand and the Philippines. To make a journey of thousands of miles in that small ark was inconceivable. We heard the South Vietnamese national anthem sung by those present, many with tears in their eyes. It was obvious the crowd still missed their homeland.
Since we were in the neighborhood, we stopped at the Pho Hoa restaurant where we sampled Bun Thit Nuong, a dish I had liked in Vietnam. The clientele here was primarily Asian American, but I also noted a table of Native Americans and one of African Americans. There we were – a slice of America in a Vietnamese restaurant in Oklahoma City. I saw that melting pot again in December when I worked with my daughter in a Red Cross shelter after their ice storm. The shelter was heavily used by those whose power was lost. During 24 hours, I translated for Spanish speaking customers, wheeled an elderly African American woman to the curb to catch a cab, held a Vietnamese woman’s daughter, and served lunch to a cowboy.
You’ll find what you expect in Oklahoma City – a friendly, open community with heavy influence from the cowboy and native American cultures. But if you look a little deeper, you’ll find what you didn’t anticipate – a robust example of the melting pot that is America. And that’s what makes it even more interesting. So, until the next column, remember “cowboy boots fit everyone”. 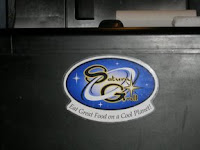