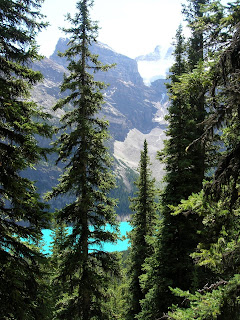 It all started with the bear warning. August in Lake Louise, Canada is berry season and the bears love them. There had been black bear sightings in the nearby Lake Moraine area where we planned to hike and all were advised to walk in a group of at least six people. There were only four of us– our friends, Paul and Betty, my husband, Ed, and me. Early one chilly morning we waited at the lake’s edge until more hikers joined us. Two of them were middle-aged, portly twin brothers from London, England. They looked as if they’d missed the bus tour rather than waiting to embark on a strenuous hike. They had one small backpack, no food, no decent hiking shoes or jackets, and only one of them carried a plastic bottle of water. This was in sharp contrast with the other couple who had joined us, who were serious, well equipped hikers complete with telescoping walking sticks. We were all silently sure the brothers would hold us back.
The first part of the trail was quite steep. A spry, fit physician from Vermont led the group at a fast clip and most of us were soon breathing heavily. But the brothers seemed to be on a stroll. They easily kept up and even chatted on the way. We stopped for water but the twins weren’t even perspiring. How could this be? After some inquiries into their lives in England, the brothers revealed that they were both opera singers, one teaches voice and performs and the second just performs. Riddle solved. Clearly, their lungs were in great shape and 6300 feet in altitude didn’t phase them at all.
The brothers were traveling on a recently received inheritance. They weren’t on a tour and didn’t know how to drive. One had failed the driving test five times. Their previous traveling passion had been to explore old industrial companies and they had been all over eastern Europe checking out steel mills. Upon arrival at a new destination, a car and driver would be hired to take them to these unusual places. In Canada, they were using public transportation, hotel cars, and the generosity of people they met. 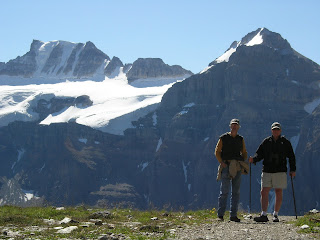 After two hours of hiking through nature’s vertical gardens in the Canadian Rockies, we parted from the rest of our group and watched them continue an even steeper climb over a mountain pass. The brothers kept up their jaunty walk and soon disappeared.
Later that day, we again ran into the “opera” brothers at Consolation Lake. As we were sunning on a large rock, we asked the siblings to sing. They had a professional repertoire and could sing anything from the Beach Boys to Verdi, from the Beatles to Mendelssohn. They had performed Elvis Presley at a bar the previous night. Actually, they didn’t just sing. One brother would sing as the other puffed out his cheeks and slapped his thighs and made all necessary instrumental sounds. They insisted that we sing with them. 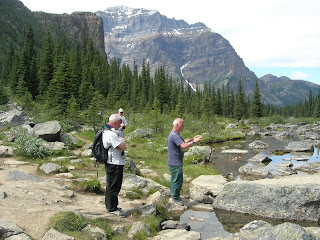 Since there were three members of the Holy Cross Episcopal choir in our group of four, we were able to sing many of our Lessons and Carols pieces, most of them British. Anything by John Rutter came easily to them. None of these stumped the brothers. But while Betty, Paul and I would forcefully sing the first verse of a piece, they also knew the second and the third and even the fourth verses. I’m sure we were quite a sight to other hikers as one of the twins dramatically directed his small chorus in our Alpine cantata. We even caroled on the path back and heard stories about giving tours at Windsor castle and performing in England. Nothing could slow down our brothers.

Of course, we gave the twins a ride back to their hotel. They hadn’t been a bit worried about being stranded. And, actually, they didn’t seem much worried about bears, either. Thinking about them and their wonderful approach to travel makes me smile. And so, until the next column, remember “Don’t judge a hiker by their shoes.”