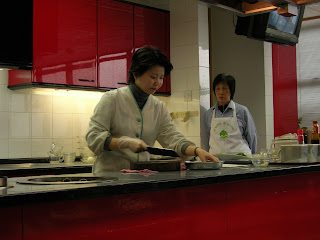 We walked off the elevator on the 10th floor of the Hong Kong electric company building, which seemed a very odd place for cooking lessons. I was traveling with a friend whose daughter had moved to Hong Kong in 2005 and was teaching at a Waldorf School. She was so at home in the weaving, condensed streets of Hong Kong and had led us to some wonderful restaurants. She also knew my love of cooking and had suggested this course. The guide book promised we would learn four dishes in two hours.
A smiling receptionist welcomed us in English and asked if we were there for the cooking lessons. When we acknowledged that we were, she asked if we would need a certificate upon completion. Not being sure what that meant, I simply said no. But then I inquired about who typically took these courses – tourists? She hesitated and said, yes, we get a few tourists. What about Hong Kong residents? Yes, we get a few Hong Kong residents. I knew I didn’t yet have a full picture of this course and asked again who primarily signed up for this course. She answered, “Filipino maids.” I was aware there was a large population of house staff that came from the Philippines. The women gather every Sunday at the downtown squares in Hong Kong, set up tables, chairs, lounging blankets and eat and visit all day. It would be interesting to join them in their culinary training.
The room for the cooking demonstration reminded me of the TXU home economics room in Paris, but was larger and had layered chairs for viewing the chef. The audience consisted of Tina and me, one Australian woman who had just moved to Hong Kong, and about eight Filipino maids. They were young, beautiful, and intensely interested in learning to cook Chinese food correctly for their employer’s family. Each had her own cell phone and when a dish was finished, they would come forward and take a picture of the elegantly presented dish. I found myself up there taking pictures, too. 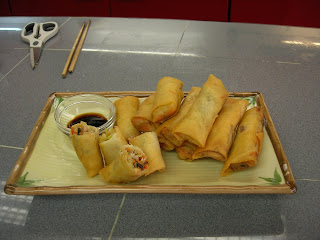 Gratefully, the instructions were in English. But it was British English with some local color thrown in. Corn starch was cornflour and the instructor made sure we knew that the fish in one dish did not require a “swimming fish”. Fresh fish is one that hasn’t been frozen. Swimming fish is one that is still alive and is swimming around the big buckets in the fish market. I’ve not seen any swimming fish in Paris other than some scared fresh lobsters at Wal-Mart’s several years back. 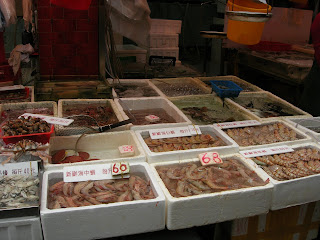 Either these dishes were outstanding or we were ravenous, but we all devoured the dishes when they were ready. My favorite was the “sweet and sour fish”, a dish similar to the American version but much lighter. After eating, they inquired again if we were going to be working toward the six week certificate. We regretfully had to decline.
Our food experiences over the next few days were varied and good. 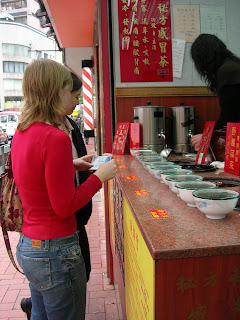 We had the traditional Dim Sum served from carts passing by our table and vegetarian fare served at the Big Budha park on Landau island. We also tried Mongolian, Turkish and Vietnamese food. We declined to eat the snake in the live market but did drink the tea that promised to cleanse the digestive system, neutralize the effect of alcohol and prevent dehydration!
Yet the dish that surprised me was chocolate cake. On February 14th, 2006, I had made a molten chocolate cake for the first time from a recent recipe in the Dallas Morning News. It was the first I had heard of it. This is a chocolate cake that is deliberately undercooked and has a chocolate pudding- like center. The next week in New York City, I had the molten chocolate cake at a restaurant around the corner from my sister-in-law’s apartment. And incredibly enough, a week later in Hong Kong, we went to an all chocolate restaurant where they served… molten chocolate cake. That recipe must have gone around the world in a matter of days!
I think of the Filipino maids every time I use my Hong Kong recipes. I’m sure their presentation is lovelier than mine and I just wish we could have stayed longer to get the six week certificate that was offered. Maybe next time. So, until the next column, remember “you don’t have to know the name of everything you eat”.
Resources
Cooking course through Home Management Centre, Electri Centre, 28 City Garden Road, North Point, Phone 2510 2828

One Response to “Cooking Class in Hong Kong”